In Zimbabwe, An Economic Crisis With 175% Inflation Drives Discontent 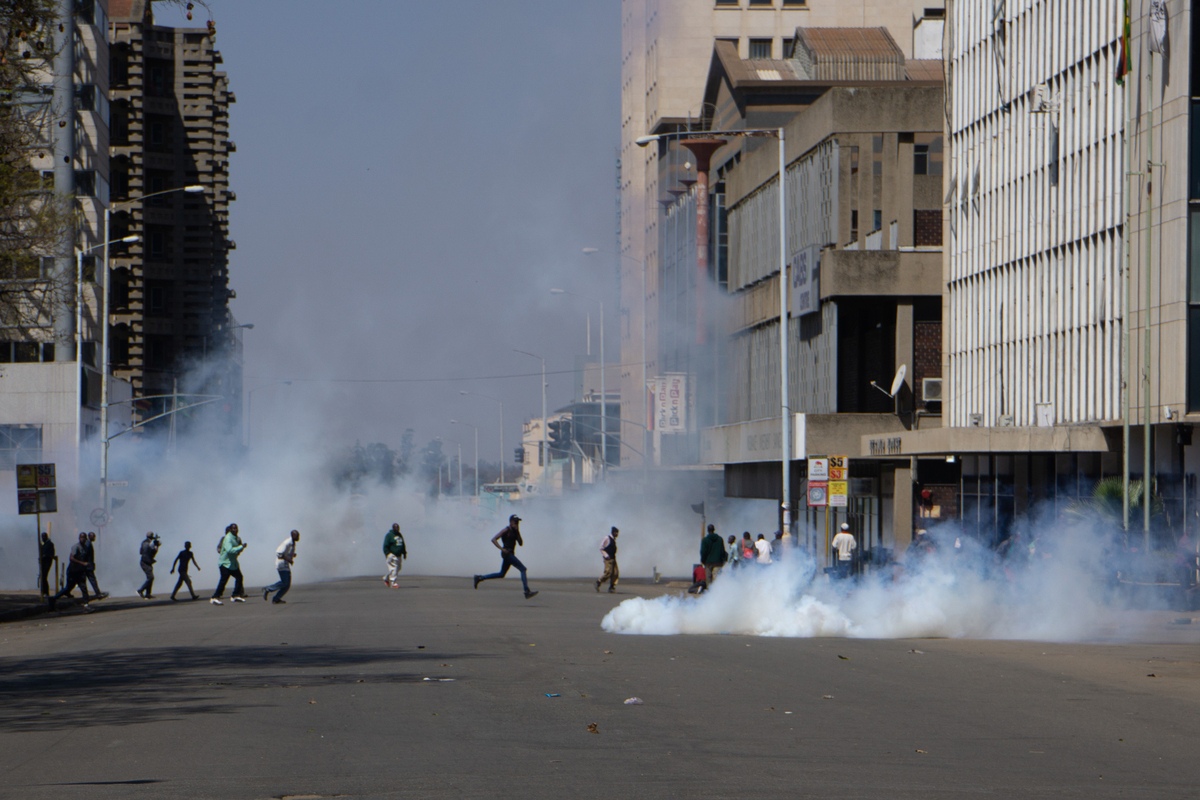 Tear gas and truncheons returned to Zimbabwe’s cities in recent days, as protesters took to the streets to express their discontent at the deteriorating economy. Protests began on Friday in Harare, the capital, where crowds were dispersed by baton-wielding police. Scores were arrested and up to a dozen were injured.

Zimbabwe faces its worst cash crunch in a decade, and some fear the threat of more anti-government protests risks pushing the country to the brink of a protracted political crisis.

Rattled by Harare’s protests and flashes of violence over the weekend in Bulawayo, Zimbabwe’s second city, Bulawayo Police Chief Superintendent Elizabeth Phiri issued a prohibition on demonstrations and warned all attempts to demonstrate would be seen as a “breach of peace.”

The presence of armed police across the industrial city stopped a protest planned for Monday, when some in Bulawayo had hoped to voice their frustration at the spiraling cost of living.

Riot police arrest and forcibly apprehend protesters during protests in Harare on Friday. 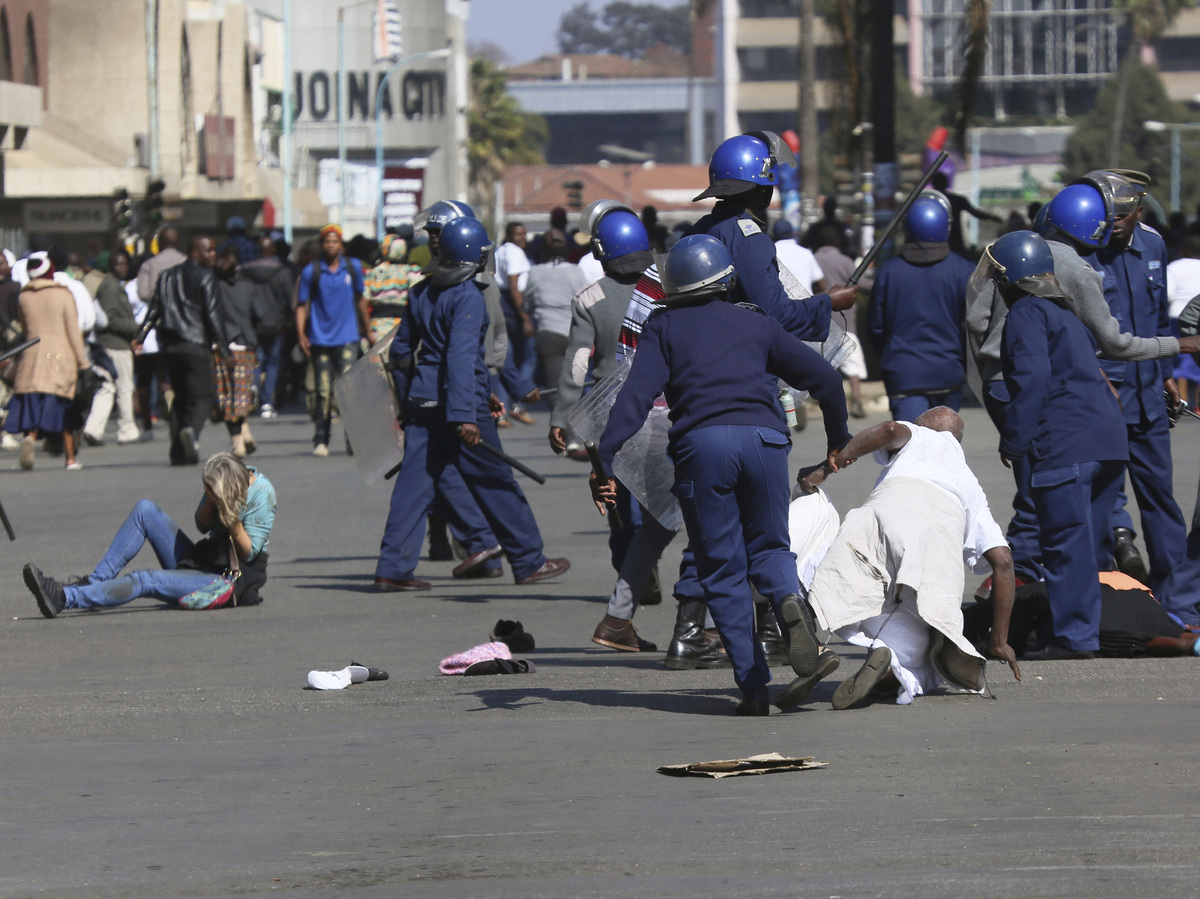 Riot police arrest and forcibly apprehend protesters during protests in Harare on Friday.

For Zororo Mushekwa, a 51-year-old market vendor in Bualwayo, the unaffordability of life is a reason for demonstrations to go on, despite a court ban.

“We are suffering,” he says. “Nowadays I don’t earn much from selling at the market, the money I get can’t even afford me to buy daily basics like bread. So people must go [to] the streets to show the government that we are not happy and they need to fix the situation. I really can’t cope much more.”

In Harare, Godfrey Kamba, 57, a disabled farmer who was beaten by police on Friday, says he is prepared to continue protesting because he feels he’s living in a do-or-die situation.

“The police beat with a baton stick on my arms, my legs and my stomach. I’m struggling to walk, but I have to protest because I’m suffering,” he says. “In my house, my family has so little to eat, so it’s better for me to continue going when others are protesting and die there if I have to.”

Month-on-month inflation has steadily increased since the government of President Emmerson Mnangagwa introduced a series of austerity measures in late 2018. At the end of last year, inflation was recorded at 42% per year. It soared to 175% in June, the most recent figure made public by the government.

About a third of Zimbabwe’s 16 million people need humanitarian food aid due to drought and the worsening economic crisis, according to the United Nations.

The devaluing of the currency, long-term water rationing and 18-hour electricity cuts have all led to various calls by activists and opposition figures to take to the streets.

Back in January, trade union leader Peter Mutasa, together with activist pastor Evan Mawarire, called for a nationwide work “stay-away” to protest a 150% fuel price hike.

People turned out for the demonstration, but the situation quickly deteriorated as security forces responded with tear gas and crowds looted and burned shops in anger at that response. Demonstrations went on for days amid an Internet shutdown by the government.

According to the Zimbabwe Human Rights NGO Forum, at least 17 were killed in the January fuel protests and more than 70 people reported gunshot injuries, allegedly at the hands of security forces.

Since Mnangagwa became president in November 2017, seizing power from his mentor, the longtime dictator Robert Mugabe, up to 24 people have been killed in confrontations between the security forces and the public.

Violence against political opponents of the ruling ZANU-PF party was a hallmark of Mugabe’s 37 years of authoritarian rule. In 2008, close to 200 supporters of the opposition Movement for Democratic Change were killed in the midst of a hotly contested presidential run-off election.

A decade later, Mnangagwa ran against a younger, popular rival, Nelson Chamisa, the leader of the MDC. He narrowly won a disputed election, which was followed by a deadly military crackdown on street protests.

The July 2018 poll was expected to give Mugabe’s successor political legitimacy and international credibility, but the continued use of force and the deteriorating economy have fostered public anger.

“We urge the government to find ways to continuously engage with the population about their legitimate grievances on the economic situation, and to stop cracking down on peaceful protesters,” Rupert Colville, the spokesperson for the U.N. High Commissioner for Human Rights, said on Friday.

The U.S. Embassy in Zimbabwe expressed “deep concern” over the alleged assault, abduction and torture of several opposition activists in the lead-up to this month’s protests. In March, the U.S. extended targeted sanctions on officials and entities connected with ZANU-PF.

“The edge of a major political crisis”

Dewa Mavhinga, the Southern Africa director of Human Rights Watch, describes the government’s crackdown strategy as akin to “putting a lid on a boiling pot.”

“Zimbabwe stands on the edge of a major political crisis, because use of police violence will not make the problems go away and people will continue to find ways to assert their constitutional rights and to show displeasure with the authorities,” he says.

However, Minister of Home Affairs and Cultural Heritage Cain Mathema insists the government’s approach is the best way to deal with civil discontent.

“No one is above the law, especially when it comes to the maintenance of law and order in the country. Those activists who decided to be confrontational and openly disregard police orders will be dealt with in accordance with the law,” he said in a statement.

Nkululeko Sibanda, an MDC spokesperson, tells NPR the opposition party will re-strategize if the government continues to block its scheduled protests.