In California, Agreement On New Rules For When Police Can Use Deadly Force

California Highway Patrol officers block an interstate entrance as protesters march. Police use of deadly force became a focus for advocates in California after the district attorney declined to prosecute the officers who fatally shot Stephon Clark, an unarmed black man whose death sparked demonstrations in the state and across the country. 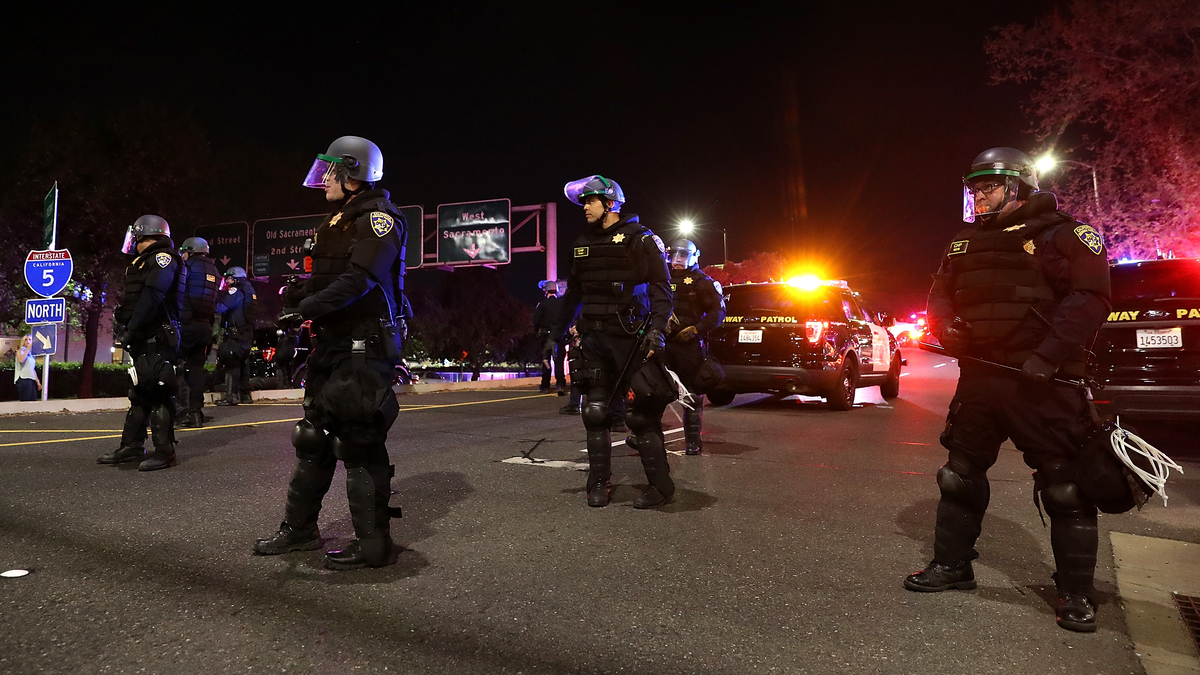 California Highway Patrol officers block an interstate entrance as protesters march. Police use of deadly force became a focus for advocates in California after the district attorney declined to prosecute the officers who fatally shot Stephon Clark, an unarmed black man whose death sparked demonstrations in the state and across the country.

Civil rights advocates and law enforcement groups have reached an agreement in the California legislature on new rules for when police can use deadly force.

The issue has been a focus for many social justice advocates in California this spring after Sacramento’s district attorney declined to prosecute the officers who fatally shot Stephon Clark, an unarmed black man whose death sparked headlines and demonstrations across the country.

Under the agreement made public Thursday, officers will only be able to use lethal force when it is “necessary” and if there are no other options.

That’s widely viewed as higher than the existing legal standard: that the use of deadly force is legal if a “reasonable” officer would have acted similarly in that situation.

But the bill language leaves out a specific definition of “necessary,” which would leave interpretation up to the legal system to figure out on a case-by-case basis.

The measure is now expected to pass the assembly before next week.

“We can now move a policy forward that will save lives and change the culture of policing in California,” Assemblywoman Shirley Weber, who introduced the bill, wrote in a statement.

Law enforcement groups have dropped their opposition and are now neutral on the bill. “We appreciate your consideration of our concerns and thank you and your staff for working with CPCA on this critical issue,” the California Police Chiefs Association wrote in a letter to Weber Thursday.

The American Civil Liberties Union, a leading advocate that helped negotiate the bill, praised the agreement. “If this bill passes and is signed by the governor, California will have one of the most restrictive use-of-force laws in the nation — if not the most restrictive,” said the ACLU’s Lizzie Buchen.

The proposed law also states that an officer’s conduct leading up to the shooting will be considered — but so too will the suspect’s behavior. And there’s language in the bill that requires police to use other alternatives, such as de-escalation or “less lethal” options, before using deadly force. But these requirements are a statement of intent, not a specific checklist.

“The general idea is, we want the police to see if they can avoid the fatal encounter,” said Robert Weisberg, a professor of criminal law at Stanford Law School.

He says the agreement struck by the two sides represents the middle ground he suspected they would inevitably reach.

He added that defining the new “necessary” legal standard “is going to be very, very difficult for the courts” — and for officers, too.

For instance, an officer may second-guess their decision-making. “‘If I let this person go, what is the risk?'” Weisberg said of an officer’s thought process. “‘Sure, I’m legally allowed to restrain him, and I might be worried that he might commit another crime. But let’s do a tradeoff here. If I persist in the arrest, this may escalate into something fatal.'”

The deal also includes an accompanying bill backed by law enforcement that sets new statewide “best practices” and training for use of force standards. The state budget under negotiation is expected to provide new money to pay for that training.

The two sides have been negotiating since a previous use of force bill failed last summer, and Senate President pro Tem Toni Atkins called them to the bargaining table in the subsequent months. Talks paused in February as each side introduced its own measure. But they resumed in recent weeks as it became clear that neither bill had enough support to pass on its own.

Atkins says she made a commitment to her colleague Weber to not stop working on use of force legislation. “We spent countless hours as soon as session ended last year right up to today bringing the different groups together so we could begin the difficult conversations needed to arrive at a negotiated agreement,” she said. “Doing nothing was not an option.”

It took the active involvement of Atkins’ office, and those of Assembly Speaker Anthony Rendon and Gov. Gavin Newsom, to secure the deal. Atkins and Rendon are now lead co-authors of AB 392.

“This is an important bill, one that will help restore community trust in our criminal justice system,” the governor wrote in a statement.

Rendon commended the moral strength of Weber in moving the bill to this point. “”We need this resolution to save lives, protect public safety, and guarantee justice in every community,” he wrote.

The bill still may receive minor amendments in the Senate, but the agreement reached Thursday is seen by all sides as the final framework — not an incremental deal to move the bill forward for future debate.