These greens are among the hydroponic crops grown by students at Brownsville Collaborative Middle School, in Brooklyn, N.Y. In June, the students started to sell discounted boxes of the fresh produce to community members. 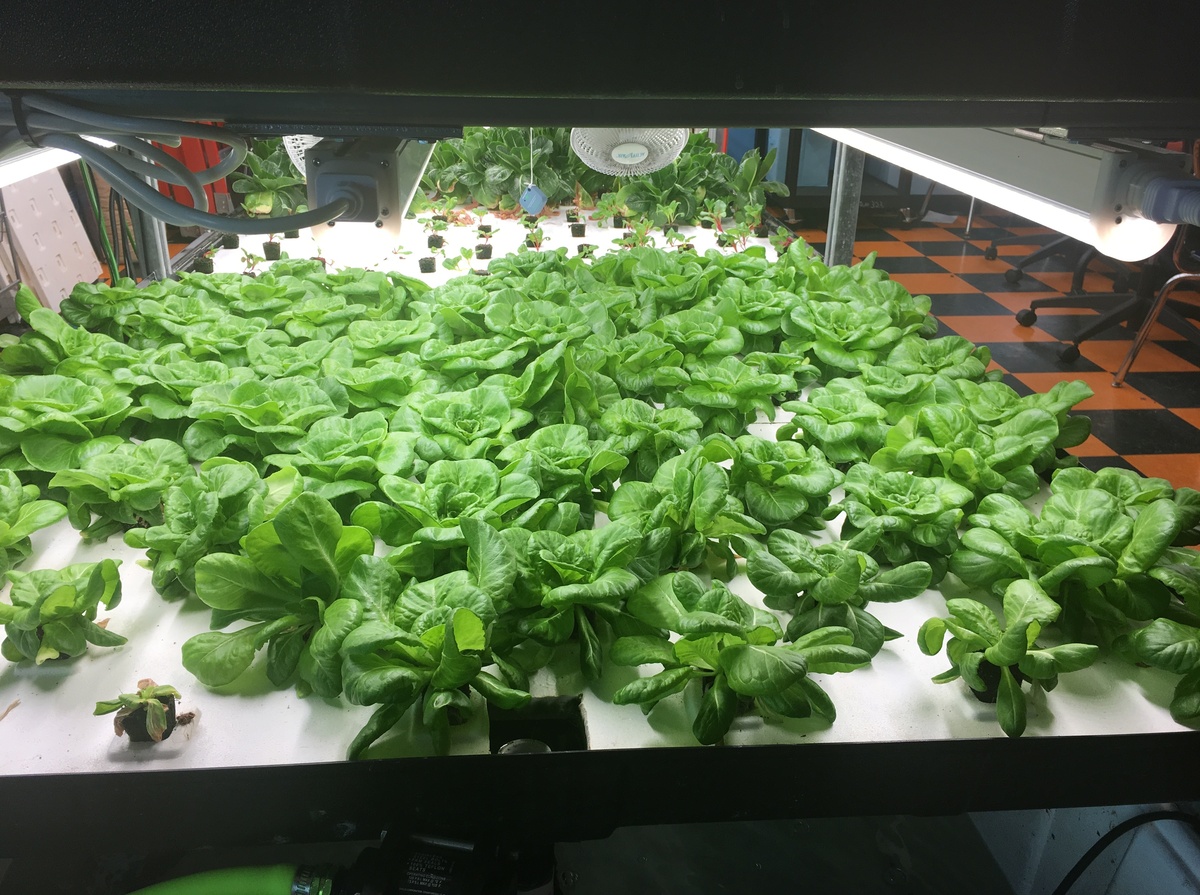 These greens are among the hydroponic crops grown by students at Brownsville Collaborative Middle School, in Brooklyn, N.Y. In June, the students started to sell discounted boxes of the fresh produce to community members.

After a full day of school a few weeks ago, 12-year-old Rose Quigley donned gloves and quickly picked bunches of fresh lettuce, Swiss chard, kale, mint and oregano. But she didn’t have to leave her school in Brooklyn, N.Y., or even go outdoors to do it.

Quigley is one of dozens of students at Brownsville Collaborative Middle School who in the past year built a high-tech, high-yield farm inside a third-floor classroom. They decided what to grow, then planted seeds and harvested dozens of pounds of produce weekly.

The vegetables never stop coming because the crops are grown hydroponically — indoors, on floor-to-ceiling shelves that hold seedlings and plants sprouting from fiber plugs stuck in trays, each fed by nutrient-enriched water and lit by LED lamps. The students provide weekly produce for their cafeteria’s salad bar and other dishes.

Later that same day, for the first time, Quigley and several of her schoolmates also sold some of their harvest — at a discount from market rates — to community members. It’s part of a new weekly “food box” service set up in the school’s foyer. Each of 34 customers receive an allotment of fresh produce intended to feed two people for a week. Three students, paid as interns, used digital tablets to process orders, while peers handed out free samples of a pasta salad featuring produce from the farm.

Quigley’s passion for farming stems from Teens for Food Justice, a 6-year-old nonprofit organization that has worked with community partners to train students at Brownsville Collaborative and two other schools in low-income neighborhoods in New York City to become savvy urban farmers and consumers.

Quigley calls the farm experience fun. But she also credits it with teaching her the term “food desert,” improving her community’s health — and giving her the opportunity to discover her love of kale. “We could have been stuck eating chicken nuggets every day,” she says. Now, thanks to the onsite farm, students have daily access to salad greens, cooking greens, and other fruits and vegetables such as cucumbers.

Her principal, Gregory Jackson, Jr., in announcing the food box service at a news conference, said that he recently counted more than 20 fast-food restaurants within a few hundred yards of the school. A typical student might eat three fast-food meals daily, he said.

“That’s why I have so many students now who are pre-diabetic already. If you don’t have any healthy food options, then how can you blame them?” he added.

The pattern repeats in communities nationwide: Grocery stores move to wealthier areas and corner fruit stands close under competition with big box grocery stores. As Mary Rogers, a horticultural science researcher at the University of Minnesota, puts it, “Food goes where the money is.”

In June, youths at Brownsville Collaborative Middle School, in Brooklyn, started to provide discounted boxes of fresh produce, grown in a student-built hydroponic farm in a classroom, to community members.

Programs such as the hydroponic farm and food box service at Brownsville aim to help close that healthy food gap. Of course, urban community farms, including those at schools, cannot single-handedly fix the nation’s food system — a system characterized by diets that are low in fruits and vegetables and high in sugar and other simple carbs. A shortage of healthy, affordable, accessible and reliable food options particularly affects urban residents who live below or close to the federal poverty line. And decades of discriminatory pay rates, banking practices and real-estate policies, among other factors, have prevented many black and Latino Americans from accumulating wealth, which fuels a correlation between race and income — and thus, food injustice.

But local networks of small urban farms, grassroots community organizations and partnerships with nonprofits and for-profit businesses nationwide are growing stronger. That’s changing how people in underserved neighborhoods think about their food choices and consolidating their voices and power as they demand better.

Progress surrounding urban food justice has been incremental. “This hasn’t been an overnight sensation,” says Dr. K. Torian Easterling, an assistant commissioner at the New York City Department of Health. Easterling serves on a food advisory council that works on food and nutrition-related issues in Brownsville and East New York, another community in Brooklyn. “There’s been a lot of organizing and community building that’s been happening. In particular, a lot of the community garden farmers and urban agriculturists have been doing a lot of great work,” he says.

School-based urban farms are one part of the food justice solution, Easterling says. A 2015 U.S. Department of Agriculture census of about 18,000 public, private and charter school districts found 7,101 gardens based in schools. The survey did not ask if gardens were traditional or hydroponic. However, close to half of all the surveyed districts reported participating in some kind of agronomic activities, such as tending campus gardens, promoting locally grown products in schools or taking field trips to local farms. Teachers participate by integrating plant biology, nutrition, cooking and business marketing into the curriculum.

Schools can then serve as hubs in community efforts to surmount some of the systemic barriers to eating healthy, such as absent or unaffordable produce in neighborhoods, a lack of reliable transportation, and cramped or non-existent kitchens in small apartments. It’s a little early for significant impact data from the Brownsville farm, but it has already so transformed the school’s culture and conversations surrounding healthy food access that it recently changed its name to the Brownsville Collaborative Middle School of Agriculture and Technology.

Dozens of studies cited by the National Farm to School Network, established in 2007 to support such efforts, reveal the public health and educational benefits of exposing children to healthy, appealing food. For instance, in one nationally representative survey, 42 percent of school nutrition directors reported that students ate more fruits and vegetables after the school added a garden. Similarly, a 2017 evaluation of 24 schools reported that students in schools with more hands-on learning, including cooking and gardening activities, ate triple the amount of fruits and vegetables as students did in schools with less of this kind of learning.

Communities seem to benefit, too. For example, a 2006 study of efforts to address food insecurity in Burlington, Vt., and integrate more local foods into school meals found that many schools started gardens to help accomplish this goal. Community awareness of food and nutrition issues also increased, the study found: The city school board passed a school food action plan, and the state legislature passed a wellness and nutrition policy.

Hydroponic and aquaponic systems (which receive nutrients derived from the waste of fish living in the water that feeds plants) have cropped up at hundreds of schools in New York City and beyond. NY Sun Works, a nonprofit that was involved in building Teens for Food Justice’s first farm in the Big Apple, has built a total of 96 hydroponic greenhouses that serve as sustainability science labs for students at schools in New York and New Jersey. And Spark-Y — a Minneapolis-based nonprofit focused on sustainability and youth entrepreneurship — has built about 30 large-scale aquaponic systems, as well as 100 smaller such systems, in Twin City schools.

Hydroponic farms come with added benefits. For starters, yields can be 10 times as much as those of a traditional farm, according to a 2015 study. That study also found that hydroponic greenhouse farms use 10 times less water than conventional ones, but the greenhouses do require significantly more energy.

However, startup costs for hydroponic farms can be high — especially for school districts. But companies that make and sell equipment for hydroponic farms, such as lighting companies, as well as medical and wellness centers, often help by donating funds or equipment to programs or systems in schools, says Heather Kolakowski. She teaches a food justice and nonprofit social enterprise course at the Hotel School at the Cornell SC Johnson College of Business.

And unlike most traditional farms, which yield little to nothing during the months that school typically is in session, hydroponic farms can operate year-round, giving school kids continuous access to produce. “Hydroponic farms in schools help to increase children’s willingness to try fresh fruits and vegetables because they are learning about it and involved in growing it,” Kolakowski says. “It has a more positive impact than saying, ‘Here, try this salad.'”

School is now out in Brownsville and throughout New York City’s public schools, but the farm — and the new weekly food box service — will keep running through the summer, manned by a farm manager, four paid student interns and five student volunteers.

Rose Quigley, the kid who now loves kale, will be one of the summer volunteers. And the big picture of the impact of her school’s hydroponic farm and produce is not lost on her. “We actually like it to get to take it home,” she says, “and maybe even parents get to take it to their friends and spread the word.”

Robin Lloyd is a freelance reporter and editor, and a faculty member at New York University’s Science, Health and Environmental Reporting Program.