How An ‘International Price Index’ Might Help Reduce Drug Prices

A pharmacist collects packets of boxed medication from the shelves of a pharmacy in London, U.K. A proposal announced by House Speaker Nancy Pelosi Thursday would allow the government to directly negotiate the price of 250 U.S. drugs, using what the drugs cost in Australia, Canada, France, Germany, Japan, and the United Kingdom as a baseline. 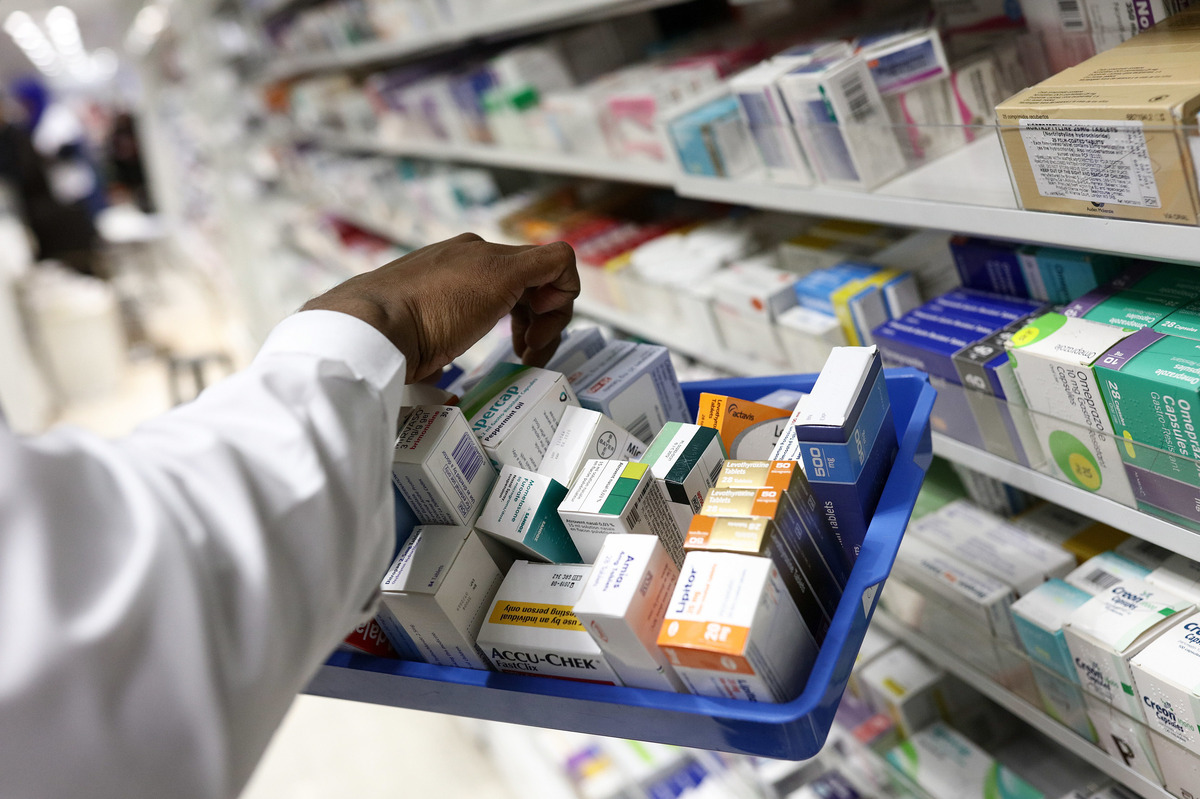 A pharmacist collects packets of boxed medication from the shelves of a pharmacy in London, U.K. A proposal announced by House Speaker Nancy Pelosi Thursday would allow the government to directly negotiate the price of 250 U.S. drugs, using what the drugs cost in Australia, Canada, France, Germany, Japan, and the United Kingdom as a baseline.

In gridlocked Washington, both Democrats and Republicans have signaled there’s potential for a deal when it comes to lowering prescription drug prices. Now, there’s an idea both Congressional Democrats and the White House seem to like: They want to base U.S. prices on something called an international price index.

“The basic idea is to peg what the United States pays for a particular drug to the price paid in some set of other countries,” says Rachel Sachs, an associate professor of law at Washington University in St. Louis who specializes in drug pricing policy. “There are many different ways to identify other countries, and there are many different ways in which that international reference price could be used to negotiate for a price here.”

House Speaker Nancy Pelosi unveiled her sweeping plan to reduce drug prices Thursday, which included an international price index. There are lots of differences between that plan and the one the White House floated last fall, but the basics — and the appeal of the concept — are the same.

“It stops drug companies from ripping off Americans while charging other countries less for the drug,” Pelosi said in a press conference announcing the House plan, which would use drug prices in Australia, Canada, France, Germany, Japan, and the United Kingdom to create a baseline in negotiating prices.

Earlier this summer, the Department of Health and Human Services sent its own IPI proposal to the White House for review, though the details haven’t been made public. The idea of establishing an IPI is the only element of the administration’s plan to lower prescription drug prices still on the table — other ideas, like displaying list prices in TV ads and ending secret rebates for middlemen have been withdrawn or blocked in the courts.

A glimpse of what the HHS proposal might look like can be found in the outline of a Medicare model HHS released last fall. Like the House Democrats’ plan, the HHS model uses an index of countries to generate an average price. But, unlike the House plan, it would not let the secretary of HHS use that average to negotiate directly with drugmakers.

The HHS outline is also more limited in the drugs that would be eligible for this sort of price-setting. Medications eligible would be only a subset of drugs used by Medicare patients — mostly injections given in doctor’s offices — whereas the House plan would extend to a wider group of 250 brand-name drugs.

Another difference? “The House Democrats’ proposal envisions a non-compliance fee that would financially penalize drug companies who won’t bargain in a good-faith way with the administration,” Sachs says. “There’s no such enforcement mechanism in the administration’s IPI proposal.”

Both plans would use the average price internationally for each drug as a benchmark in negotiations, so that Americans don’t pay more than about 20% above what people in other countries pay. That’s still more than what people pay outside the U.S., but less than they pay now.

“The prices the U.S. is currently paying today can be two or three times as much, [though it] varies a lot by product,” says Stacie Dusetzina, a professor of health policy at Vanderbilt University School of Medicine. “This would be a major price reduction.”

One example of a drug priced much higher in the U.S. than elsewhere is Humira, a brand name rheumatoid arthritis drug. In 2015, it cost $2,669 a month in the U.S., while the list price in the U.K. was about half that — $1,362. The same drug cost only $552 in South Africa, according to the International Federation of Health Plans.

“I believe that the price of Humira now in the U.S. is about $63,000 a year,” says Ben Wakana, executive director of the advocacy group Patients for Affordable Drugs. “And [the drugmaker] AbbVie has raised the price eleven times between 2014 and 2018.” Wakana has a personal connection to Humira — his brother. In the U.S., there’s no generic competition that might push the price down, he notes.

“For patients like my brother and like the thousands of people who take Humira every year, that price is simply too high,” Wakana says. “We need competition. And if we can’t get competition, then we need to be able to negotiate with AbbVie for a fair price — like they are offering in other countries.”

So, would establishing an international price index actually work to lower drug prices?

The Trump administration projects that, in five years, using its IPI would save Medicare patients $3.4 billion. Policy analysts have argued that the amount patients would save is actually a bit murkier because many Medicare patients who use these drugs also have supplemental insurance. In addition, because so many countries — 24 in Europe alone — use this kind of indexing, there’s the risk of a circular effect, with everybody looking to their neighbor instead of basing the cost of the drug on concrete measures of the medicine’s clinical value or the costs of developing and producing it.

In Canada, the government already uses international drug list prices in negotiations, and has recently made moves to go even further.

“The comparison of our list prices in Canada to the list prices in other countries has proven to be not very effective at controlling the real price of medicines in this country,” says Steve Morgan, a professor of health policy at the University of British Columbia. One reason for that, he says, is that list prices don’t reflect real prices after drugmaker rebates. So now, he says, “Canada is trying to implement further price regulations that would make sure that the final negotiated prices are reasonable.”

In the United States, many Republican lawmakers and conservative groups have opposed the idea of an international index — arguing that it runs against free market principles.

Unsurprisingly, drugmakers also object. “Speaker Pelosi’s radical plan would end the current market-based system that has made the United States the global leader in developing innovative, lifesaving treatments and cures,” Stephen Ubl, CEO of lobbying group PhRMA, says in a written statement. “We do not need to blow up the current system to make medicines more affordable.”

But Pelosi and her allies seem to be betting there is political will to go against drugmakers this time. Despite the huge sums spent on lobbying, the pharmaceutical industry is now the most unpopular industry in the country, according to a recent Gallup poll. And with a presidential election coming up, Americans polled say lowering drug prices is a top priority.

This could mean there’s room for the House and the White House to work together, especially on an idea like an international price index that they’ve both proposed.

“We do hope to have White House buy-in,” Pelosi said Thursday. “That seems to be the route to getting any votes in the United States Senate, and certainly we want as strong a bipartisan vote as we can in the House and the Senate. So we would hope that they would support this.”