Economy Probably Rebounded In First Quarter, Thanks To Strong Spending

Shoppers wait in line at a Target store in Newport, Ky., on Nov. 29, 2018. Strong consumer spending boosted analysts’ economic growth forecasts for the first quarter of 2019. 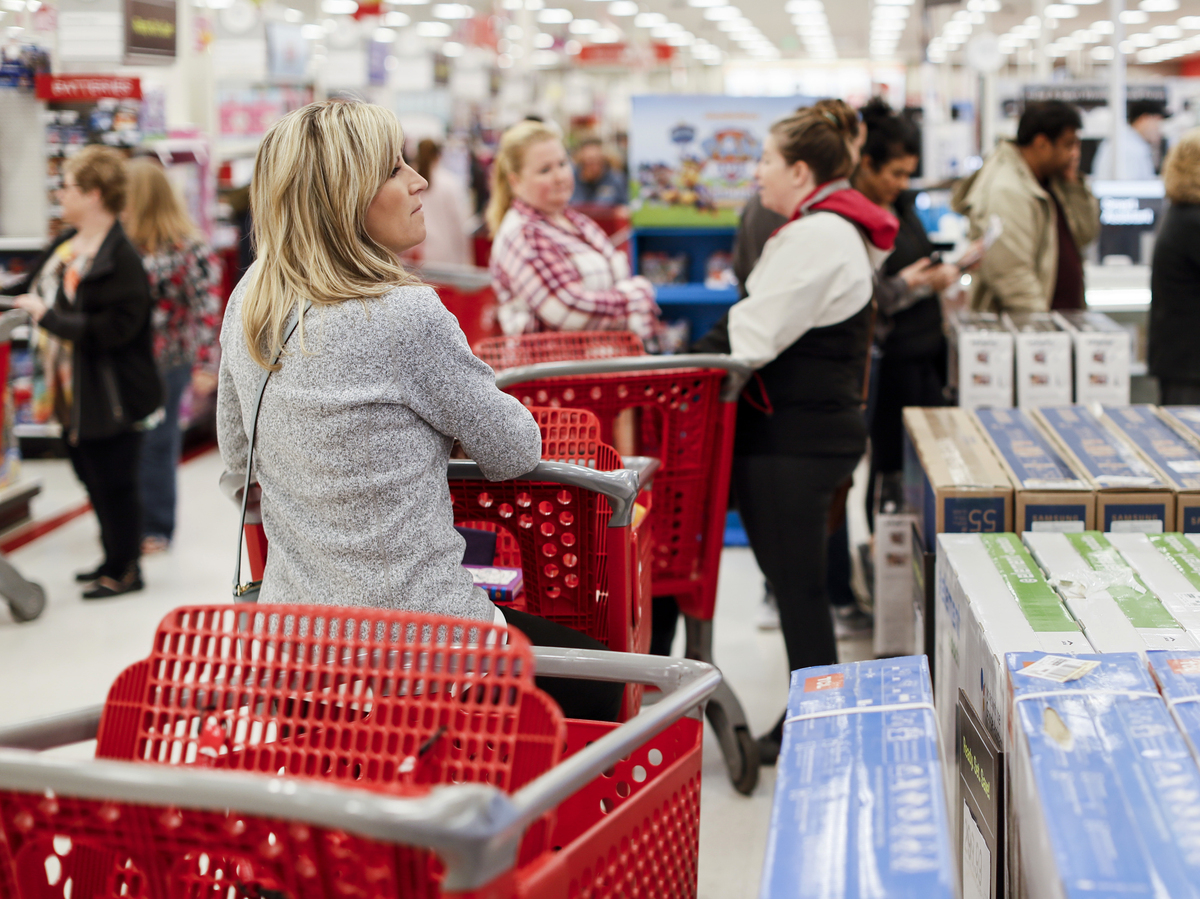 Shoppers wait in line at a Target store in Newport, Ky., on Nov. 29, 2018. Strong consumer spending boosted analysts’ economic growth forecasts for the first quarter of 2019.

Consumers are “hanging tough,” and because they mean so much to the economy, analysts are boosting their growth forecasts.

The Commerce Department releases a snapshot of first-quarter economic growth Friday. It’s expected to show that the U.S. economy picked up steam during the first three months of the year, after a rocky finish to 2018.

Forecasters anticipate that gross domestic product grew at an annual rate of 2.5% to 2.9% in the first quarter, up from a pace of 2.2% at the end of last year. That’s a significant turnaround from six weeks ago, when many analysts expected a slump in GDP growth to just 2% or less.

A pickup in consumer spending contributed to the improved outlook. Retailers enjoyed strong sales gains in March after a lackluster February.

“I think there’s a sign of relief,” said Jack Kleinhenz, chief economist for the National Retail Federation. “Not only retailers but the overall view of the economy.”

Earlier in the year, shoppers seemed worried about the stock market slump, the government shutdown and trade tensions with China. But by the end of the first quarter, they seemed ready to put those fears aside and resume spending.

There are still some yellow caution flags. Economist Ben Herzon of IHS Markit predicts robust first-quarter growth of 2.9% but only because of temporary factors such as a boost in inventories and a slowdown in imports. Once those wear off, he expects GDP growth for all of 2019 will cool to about 2%, down from around 3% last year.

Many independent forecasters share that view. But the Trump administration continues to project confidence that last year’s 3% growth rate can be sustained.

“I know I may be at loggerheads with some of the forecasters and maybe even the consensus,” White House economic adviser Larry Kudlow told reporters at the National Press Club on Tuesday. “But I really think this is going to turn out to be a pretty strong first half and a pretty strong year.”

The administration argues that last year’s tax cuts sparked a surge in business investment that will continue to pay off with stronger output in the years to come.

“Business investment, which is a key part of our tax and regulatory reforms, will outperform most expectations in 2019 and beyond,” Kudlow said.

Others are skeptical. A report from the Commerce Department on Thursday showed a decline in shipments of core capital goods last month. That’s an indication of slowing business investment, although there were also signs of a possible rebound later this year.

“There’s certainly no game-changing event here,” Zandi said. “The tax cuts don’t seem to have jump-started a significant boost in investment — at least not one that’s sustainable.”

The White House would welcome a headline number showing that the economy grew close to 3%, however transient the expansion might be. But some observers say that just focusing on GDP isn’t enough.

“That gives us one snapshot of what’s happening in the economy,” said Heather Boushey, executive director of the Washington Center for Equitable Growth. “It doesn’t actually tell us how that national income — all the income that comes from all the goods and services that we produce in our economy — where it goes.”

Democratic leaders in Congress have asked the Commerce Department to report not only the size of the nation’s economic pie but also how it’s sliced up.

“In the early part of the recovery, it was certainly people at the very top that recovered the fastest,” Boushey said. “We’re now seeing indications that those income gains are more widely spread.”

Last year, workers at the bottom of the income ladder saw some of the fastest wage gains, thanks to a strong job market as well as increases in state and local minimum wages.