Rep. Adam Schiff (D-Calif.), chairman of the House Intelligence Committee, speaks with reporters about a whistleblower complaint on Thursday. 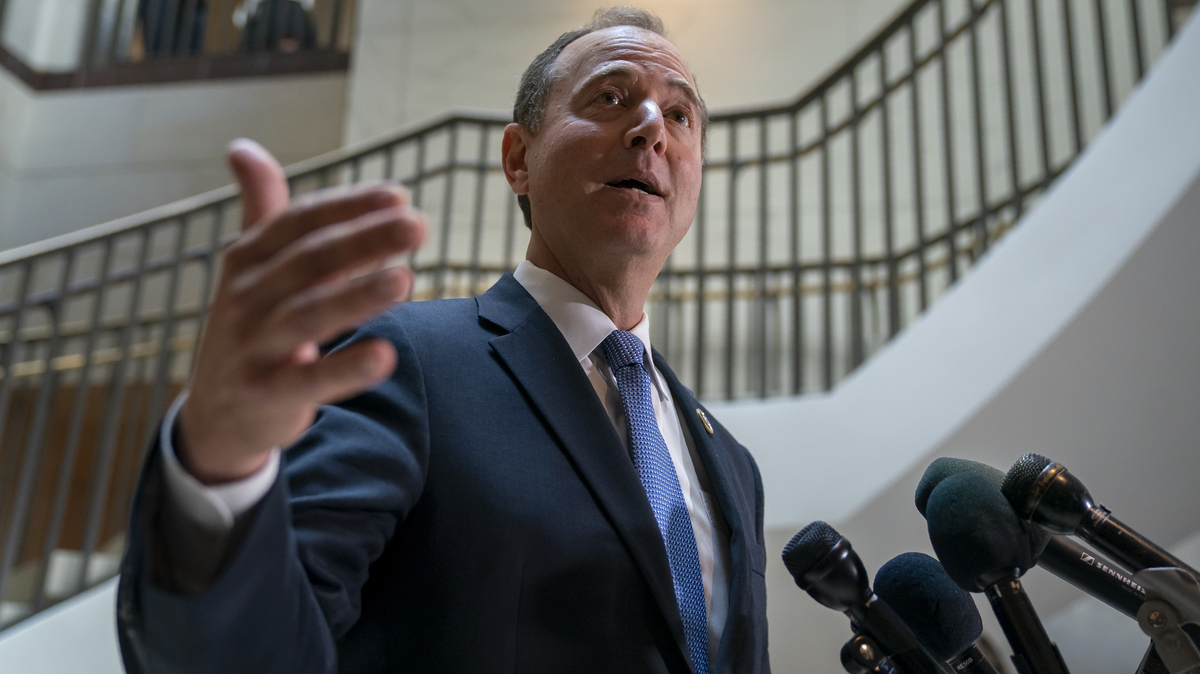 Rep. Adam Schiff (D-Calif.), chairman of the House Intelligence Committee, speaks with reporters about a whistleblower complaint on Thursday.

Ahead of a week when President Trump will have his first face-to-face meeting with the Ukrainian president, Democratic calls for investigation of Trump’s communications with Ukraine have intensified.

Acting Director of National Intelligence Joseph Maguire has agreed to testify in open session before the House Intelligence Committee on Thursday about a whistleblower complaint that the intelligence community inspector general has deemed “credible and urgent.” Multiple news outlets have reported that the complaint concerns Trump’s communications with Ukraine.

Trump urged Ukrainian President Volodymyr Zelensky to investigate Joe Biden’s son Hunter “about eight times” in a July phone call, according to reporting in the Wall Street Journal. House Democrats are also investigating whether that pressure coincided with the withholding of military aid from Ukraine.

The Trump administration approved $250 million in military aid to Ukraine this month, but lawmakers on both sides of the aisle had expressed concern about the administration’s delay in approving that money.

The Trump administration has doubled down on its insistence that Trump did nothing wrong, but the allegations about Trump’s requests of Ukrainian leadership have led some Democrats to reaffirm calls for impeachment.

“By failing to act, Congress is complicit in Trump’s latest attempt to solicit foreign interference to aid him in US elections,” presidential candidate Elizabeth Warren tweeted on Friday. “Do your constitutional duty and impeach the president.”

House Intelligence Committee Chairman Adam Schiff (D-Calif.) told CNN on Sunday that he has previously been hesitant to advocate for impeaching Trump. Schiff said he thinks it’s important to make clear to the public that impeachment is something Democrats pursue “reluctantly.”

But Schiff said if Trump did pressure Ukraine into investigating a political opponent, impeachment could be appropriate.

“This would be, I think, the most profound violation of the presidential oath of office certainly during this presidency, which says a lot, but perhaps during just about any presidency,” Schiff said.

Notably, House Speaker Nancy Pelosi still has not called for impeachment. Pelosi did, however, issue a statement on Sunday warning the administration against withholding the full contents of the whistleblower complaint.

“If the Administration persists in blocking this whistleblower from disclosing to Congress a serious possible breach of constitutional duties by the President, they will be entering a grave new chapter of lawlessness which will take us into a whole new stage of investigation,” Pelosi wrote.

House Democrats say they are legally entitled to see the full complaint. In remarks delivered Thursday, Schiff said the director of national intelligence is supposed to provide that information to Congress but so far has not.

“We do not have the complaint. We do not know whether the press reports are accurate or inaccurate about the contents of that complaint,” said Schiff.

Constitutional law expert Jonathan Turley told NPR’s Rachel Martin that there could be a “court fight” over whether the Trump administration is required to disclose to Congress the substance of the whistleblower complaint.

“There’s good arguments on both sides,” Turley said. “But Congress clearly has legitimate interest in finding greater details as to what was said to this Ukrainian figure.”

Trump told reporters on Sunday that his phone call with Zelensky was “absolutely perfect” and that he “did absolutely nothing wrong.”

Trump said his conversation with Zelensky focused on corruption and on “the fact that we don’t want our people, like Vice President Biden and his son, [contributing to] the corruption already in Ukraine.”

When asked whether his administration would release a transcript of his conversation with Zelensky, Trump said he’s “going to talk about it.”

“I love it,” he said, referring to the contents of the conversation. “But you have to be a little bit shy about doing that.” Trump emphasized his belief that world leaders should be able to speak freely in conversations with each other.

Trump also told reporters that he would have “no problem” with his personal attorney, Rudy Giuliani, testifying before Congress. (Asked late Thursday night whether he asked Ukraine to look into Joe Biden, Giuliani responded, “Of course I did.”)

Trump and his allies claim that while Joe Biden was vice president, he inappropriately sought to have a Ukrainian prosecutor fired. The prosecutor was reportedly looking into Biden’s son Hunter’s business affairs — because in 2014, Hunter Biden served on the board of a Ukrainian energy company. Ukraine’s prosecutor general has said there was no evidence that either Biden had done anything improper.

“I do not want Ukraine to again be the subject of U.S. presidential elections,” Ukrainian Prosecutor General Yuriy Lutsenko told Bloomberg News in May. “Hunter Biden did not violate any Ukrainian laws — at least as of now, we do not see any wrongdoing.”

It seems that for the moment, Ukraine is very much again the subject of a U.S. presidential election. At the Polk Country, Iowa, steak fry on Saturday, Joe Biden said, “Trump’s doing this because he knows I’ll beat him like a drum.”

“He’s using the abuse of power and every element of the presidency to try to do something to smear me,” Biden said.

Trump confirmed Sunday that he will meet with Zelensky, the Ukrainian president, this week at the U.N. General Assembly in New York. When asked by reporters Sunday whether he will mention Joe Biden at that meeting, Trump said, “I won’t be mentioning much.”