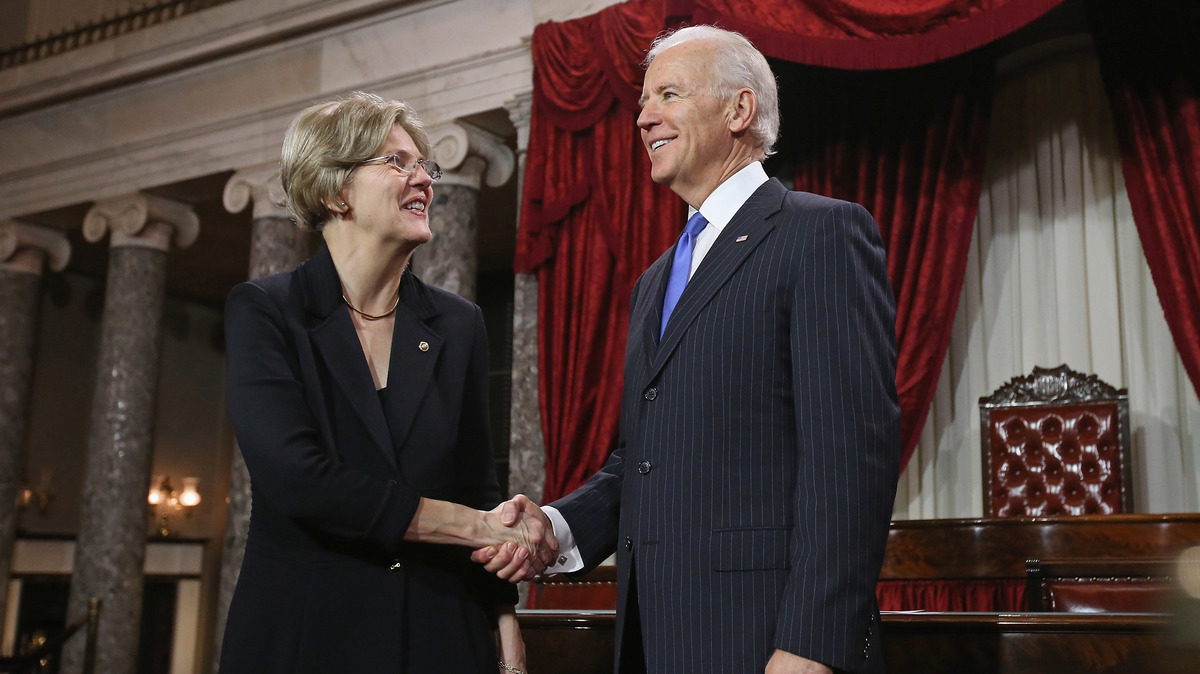 In 2005, bankruptcy was on the rise and had been for years.

Lawmakers were pondering why, exactly, that was happening — and what, if anything, they should do about it — when two future presidential rivals squared off over a bankruptcy overhaul bill that would restrict who could write off their personal debts.

In one corner, Joe Biden — one of the staunchest Democratic advocates for the bill and a senator from Delaware, home to several large credit card companies. He was also the ranking member of the Judiciary Committee, which was debating the bill.

In the other corner, Elizabeth Warren, a Harvard Law professor who had fought against this type of bankruptcy overhaul for years, and who was on a panel convened for a hearing over the bill.

Their conversation started off with a testy (but weedy) exchange about bankruptcy courts. And it escalated from there, with plenty of interruptions and the occasional barb — Biden at one point cast Warren’s arguments as “mildly demagogic.” It ended with a tense dispute over what, exactly, the dispute ought to be.

WARREN: [Credit card companies] have squeezed enough out of these families in interest and fees and payments that never pay down principle.

BIDEN: Maybe should talk about usury rates. That maybe, that’s what we should be talking about; not bankruptcy.

WARREN: Senator, I’ll be the first. Invite me.

BIDEN: Now, I know you will, but let’s call a spade a spade. Your problem with the credit-card companies is usury rates, from your position. It’s not about the bankruptcy bill.

WARREN: But senator, if you’re not going to fix that problem, you can’t take away the last shred of protection for these families.

BIDEN: OK, I get it. [pause] You’re very good, professor.

It was heated debate with a polite, even charming end — complete with laughter throughout the hearing room, but the stakes are higher now, with both Warren and Biden potentially poised to share a debate stage.

And while debate over a 14-year-old bankruptcy bill might otherwise be largely forgotten by now, the 2020 presidential election has made the disagreements between Biden and Warren relevant again — and shows how their exchange over that 2005 bill show up in their current presidential campaign strategies.

With Democrats in the minority in the Senate in 2005, Biden argues he was trying to make a Republican bill better. Warren thought, even then, it was fundamentally flawed and bad for consumers.

What the bill did

A major question at the heart of the 2005 bankruptcy bill was why bankruptcies were on the rise.

One side — including Warren and many Democrats — said it was because people were financially strapped due to major obligations like medical debt, and that credit card companies were exacerbating the problem.

Others — largely Republicans, but also some Democrats, like Biden — said that it was a combination of irresponsible spending and a system that made it too easy to apply for bankruptcy, leading to abuse. That abuse, these lawmakers argued, leads to higher costs for other people seeking credit.

The 2005 bill restricted who could discharge their debts via Chapter 7 bankruptcy, and also made the process more difficult. It included a means test, in the form of comparing a person’s income with their state’s median income. The goal, proponents argued, was to make sure that people who could still pay their debts weren’t able to unfairly escape their debts, while also ensuring that people who couldn’t pay were able to get relief.

The bill also said that a person had to go through credit counseling before obtaining bankruptcy.

Opponents, however, cast bankruptcy as an important financial protection that the legal system provides to people in difficult circumstances. They thought that the bill would make it unduly hard to file, enriching credit card companies in the process. And indeed, as they argued, credit card companies themselves had lobbied for it.

Warren and her fellow opponents also argued that bankruptcy was a women’s issue, as single and divorced women were disproportionately represented among bankruptcy filers. Passing this type of reform would therefore disproportionately hurt women and children, they said (an argument that Warren pointedly made in a 2002 Harvard Women’s Law Review essay that focuses heavily on Biden).

This was not new legislation. Similar bills had been proposed in Congress several times — it even reached the Oval Office in the final days of Bill Clinton’s presidency, but he declined to sign it.

Biden and Warren had been on opposite sides during that period, as well — Biden voted for that 2000 bill, and Warren had counseled Hillary Clinton that it would be bad for consumers.

And that was the lay of the land when they met on Capitol Hill.

“This is one of those situations where the current story is not misleading. They were both very key players in this,” said David Skeel, professor at the University of Pennsylvania law school and the author of a history of bankruptcy.

“Elizabeth Warren was the most important critic of the legislation, and she spent years fighting it. That’s what really first got her into the into the public eye,” he said. “And Joe Biden was critically important to passing the legislation because credit card companies are very important to Delaware. And that’s where he was coming from.”

In the end, the bill passed. And as for the effects, they’re complicated.

One outcome: the bill included a provision that made obligations like child support and alimony a top priority for debtors to pay off — which addressed one concern of the bill’s opponents.

And another, overarching result: bankruptcies fell sharply afterward. And that’s linked to one other effect of the bill, according to Skeel.

“The biggest effect is that it is now more expensive to file for bankruptcy than it used to be,” Skeel said, “because of the the so-called means test that was put into the 2005 amendments that requires that debtors fill out forms to determine whether they would be capable of repaying some of what they owe.”

But, crucially, it’s not totally clear that that shows a reduction in bankruptcy abuse, he added.

Research on the bill also doesn’t hand either side a total win. On the one hand, the reform was associated with lower interest rates on credit cards, as Vox’s Matthew Yglesias pointed out in an article on the Warren-Biden debate.

But, Yglesias argued, studies also suggested that the law meant less access to credit and lower credit scores for some borrowers, not to mention a potentially slower bounce back from the Great Recession.

Potential 2020 voters have already had a preview of Warren’s attacks on Biden. In 2016, Sen. Bernie Sanders, I-Vt., attacked Hillary Clinton’s vote for a similar 2001 bankruptcy bill — a vote she took after Warren convinced her it was a bad bill. Sanders used Warren’s criticisms as part of his attacks.

Warren talked about her disappointment in a 2004 interview with journalist Bill Moyers:

WARREN: She voted in favor of it.

WARREN: As Sen. Clinton, the pressures are very different. It’s a well-financed industry. You know, a lot of people don’t realize that the industry that gave the most money to Washington over the past few years was not the oil industry. It was not pharmaceuticals. It was consumer credit products. Credit card companies have been giving money, and they have influence.

MOYERS: And Mrs. Clinton was one of them as senator.

WARREN: She has taken money from the groups and more to the point, she worries about them as a constituency.

For her part, Clinton argued that she was able to support the bill because it, at that point, included better protections for women seeking child support and alimony.

That whole dynamic surrounding the law is repeating itself in this election.

“If you talk to many independent voters, they worry that both parties are funded by the same corporate interests,” said Adam Green, co-founder of the Progressive Change Campaign Committee, which has endorsed Warren ahead of 2020. “Elizabeth Warren has been part of the solution trying to re-brand the Democratic Party as being of the people. The credit card fight was just one chapter of that ongoing struggle.”

While Warren uses the fight as evidence of her willingness to fight corporations on behalf of everyday Americans, Biden and his supporters frame the bankruptcy bill as evidence of his practicality — and they also emphasize protections in the bill like those prioritizing child support.

“Sen. Biden, knowing essentially that the bill was likely to make it through a Republican-led Congress to a Republican-controlled White House, really worked hard to make sure that bill protected middle-class families,” said Terrell McSweeney, who worked as a Biden staffer just after the bill’s passage.

And that plays into a larger narrative from the Biden campaign.

Democratic voters are concerned with far different topics than the bankruptcy bill, like climate change and a health care overhaul.

But then, if both candidates remain key contenders for the nomination — and if they share a debate stage — there’s a good chance the topic will come up again, as a symbol of the differences between the two candidates.

And while bankruptcy expert Skeel acknowledges that he’s not a political strategist, he does have one political prediction based on the Biden-Warren bankruptcy fight.

“It strikes me that one potential implication,” he said, “is it’s highly unlikely you will see a Democratic ticket with both of them on it.”