A suicidal depression almost ended Ella Risbridger’s life, but the London poet and journalist instead ended up writing an uplifting cookbook that promises to “make you fall in love with the world again.” 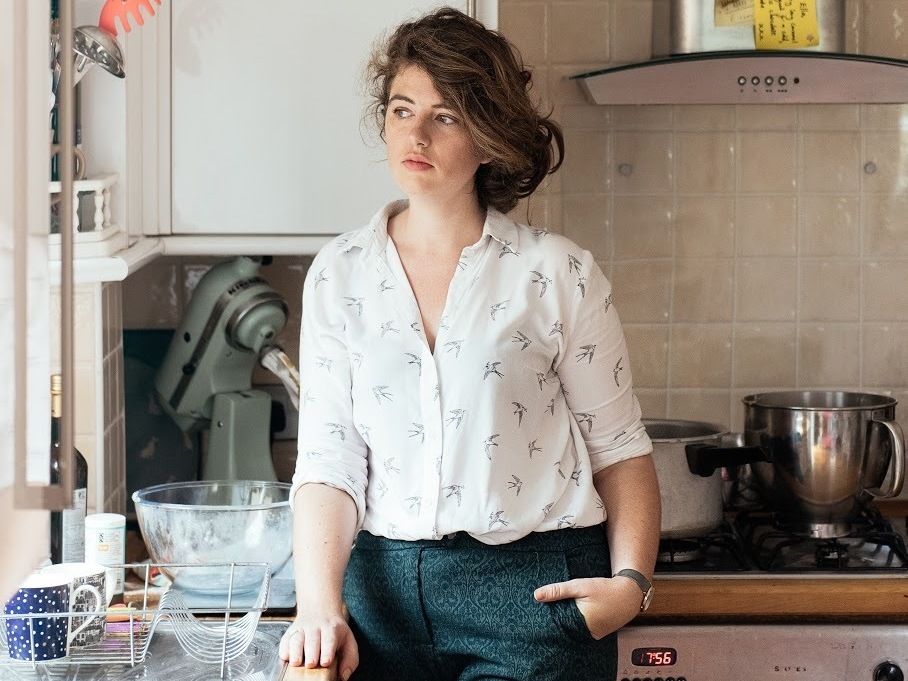 A suicidal depression almost ended Ella Risbridger’s life, but the London poet and journalist instead ended up writing an uplifting cookbook that promises to “make you fall in love with the world again.”

Five years ago, Ella Risbridger found herself lying on the floor of her London apartment, staring at a bag of chicken hanging from the back of a kitchen chair. The poet and journalist, then 21, was deeply, suicidally depressed. But instead of ending her life, she ended up roasting that bird — and writing Midnight Chicken, an uplifting cookbook that promises “to make you fall in love with the world again.”

Perhaps even more remarkable is that she finished writing the book, a project she ultimately credits with lifting her out of depression, in the dying days of her romantic partner and writing champion.

Such Messianic promises may be the stuff of antidepressant commercials. But this heartfelt collection of recipes and reflections on moments worth living is stirring real hope, joy and glowing reviews from cookbook authors, home cooks and even non-cooks.

Only time will tell if Midnight Chicken becomes a No. 1 Amazon bestseller in the U.S. this summer, as it did last winter in the U.K., where Bloomsbury Publishing first released Risbridger’s debut cookbook. (It’s coming to American bookstores June 11.)

Having cooked Midnight Chicken and other signature recipes — Life-Affirming Mussels, Uplifting Chilli Lemon Spaghetti (aka Flatly Suicidal Spaghetti) — I considered doing what reviewers have already done: telling you why a little-known cookbook by a no-name author is selling like Ecstasy-spiked kombucha. OK, I also considered spelling out the universal appeal of this diet-free cookbook. In addition to the dramatic back story, the author’s culinary composition echoes Bridget Jones’ self-effacing wittiness, Julia Child’s companionable forgiveness and Sylvia Plath’s poetic prose. The recipes are truly tasty, but the healing nourishment is in the details, from the cozy illustrations to the pink ribbon bookmark to the annotated list of things worth living for.

Or perhaps it’s best to let Risbridger tell you in her own words what the little inspirations are behind her book, as captured in this excerpt:

“Dinner parties, and Saturday afternoons in the kitchen, and lazy breakfasts, and picnics on the heath; evenings alone with a bowl of soup, or a heavy pot of clams for one. The bright clean song of life and salt, and the smoky hum of caramel-edged onions. Soft goat’s cheese and crispy pastry. A six-hour ragù simmering on the stove, a glass of wine in your hand. Moments, hours, mornings, afternoons, days. And days worth living for add up to weeks, and weeks worth living for add up to months, and so on and so on, until you’ve unexpectedly built yourself a life worth having: a life worth living.”

Ultimately, I decided to convey the life-affirming, mood-lifting magic of Risbridger’s food writing via our recent email exchange, which has been edited for length and clarity.

Your transformation from suicidal poet to humble author of a life-affirming cookbook is the stuff that rom-coms are made of. Whatever moved you to write a cookbook?

I wrote a cookbook sort of by accident. I always planned to be a writer, but assumed I’d write novels. My partner [writer John Underwood] taught me to cook in the early days of our relationship. While he was at work, I would send him long emails about what I was cooking. He bought me a blog domain (maybe so he could actually get some work done?), which very quickly became a book proposal, which very slowly (five years!) became a book.

You’ve written a genre-bending cookbook that reads like a good novel and inspires better than the best self-help book. It defies categorization, and yet, Midnight Chicken is an Amazon bestseller in three categories: food writers, depression and party planning. It’s right up there with Nigella Lawson’s Nigella Bites, Sylvia Plath’s The Bell Jar and Mary Berry’s Quick Cooking. How do you categorize your cookbook?

Oh, man. I have no idea how to categorize Midnight Chicken. It’s a cookbook first — a helpful and practical guide to making stuff. The memoir and self-help elements crept in. I couldn’t write about food without also writing about myself. I don’t think anyone can write about food without it being a bit autobiographical. Writing about food — my life, my people — has helped me so much. That’s where the self-help gets in.

The moral of your story echoes research conclusions on cooking’s psychological benefits, with one important distinction. When you write about cooking, you’re not writing about cooking by rote, but cooking with love. What’s love got to do with the healing power of cooking?

There are very few ways to write about love that don’t feel clichéd, and few ways to write about the practical changes love has made to your life without wanting to turn yourself inside out with embarrassment. Maybe this is an English thing, but I’ll try to overcome it long enough to say I cook for the people I love because it’s like giving someone a birthday present every day. It makes them happy, and that makes me happy. That (over the last five years) I have learned to love myself enough to believe I, too, deserved to be happy has been revolutionary. So much of love feels revolutionary to me.

Your views of comfort food are refreshingly un-American. In fact, you’ve adopted the German concept of kummerspeck, or comfort eating, as your own. How did you do what dieters only dream of doing: ditch dieting and permit yourself the guilt-free pleasure of emotional eating?

I don’t think I’ll ever be done with dieting or guilt, not really. At this point in time, I can’t imagine many women being completely done with dieting, with guilt, with shame around what they eat, how they eat and how they look. But it’s true, I mostly eat what I want. This isn’t effortless! How could it be? I have Instagram. I read magazines. I see adverts. I spent years of my life dieting off and on. I tried crash diets, fad diets, anything I thought would make me thin, which would in turn make me happy if only I stuck at it. This did not happen! I stayed pretty much the same size, give or take a few kilos, and was so unhappy. I don’t do that anymore. Now I try to eat what I want, when I want; I try to eat when I’m hungry and stop when I’m full. I am not especially thin, and don’t suppose I ever will be, but I am happy. I am definitely happy.

I kept writing because John, the “Tall Man,” [as she refers to him in the book] told me to. He read every draft and every recipe. He was my biggest champion [and an autobiographical writer himself.] We had a pact that we would keep writing about our lives together whatever happened; we talked a lot about what should happen if one of us died. We both believed in the Power of Art. He would be furious with me for saying something so fundamentally, embarrassingly uncool, but that’s the truth: I kept writing because it mattered so much to him that I did.

Also, we needed the money. Even with the National Health Service, cancer is expensive. Bills don’t go away just because one of the people responsible for paying them hasn’t been to work in two years. And writing was my job: a job that let us be together as much as we needed, a job that gave us the time together while we still had it, a job that let me record the good years in case we should ever need to find our way home. And when it became clear we were never going home, the book became a place where he could be alive again; a place where we could be together.

What’s next? Midnight Chicken: The Movie? Another cookbook? Something else?

I have a real butterfly mind; I’m absolutely unable to settle on anything for too long. I’m just putting the final touches on a poetry anthology for Doubleday, Set Me On Fire: A Poem For Every Feeling. It’s poetry for people who thought they hated poetry. I’m also working on some fiction projects, mostly for fun. Who knows, maybe I’ll end up at novels after all. And yes, I’m thinking about a second cookbook. I’ve got so many more recipes, and so many more stories — so many more love stories of a kind. A side-effect of John’s death has been to show me both how very loved he was, and how very loved and lucky I still am. I want to tell those stories, too. Fingers crossed.

Jean Fain is a Harvard Medical School-affiliated psychotherapist and the author of The Self-Compassion Diet.