Snow falls on Saturday in Kansas City before a game between the Chiefs and the Indianapolis Colts at Arrowhead Stadium. More than a foot of snow fell in some regions of the Midwest. 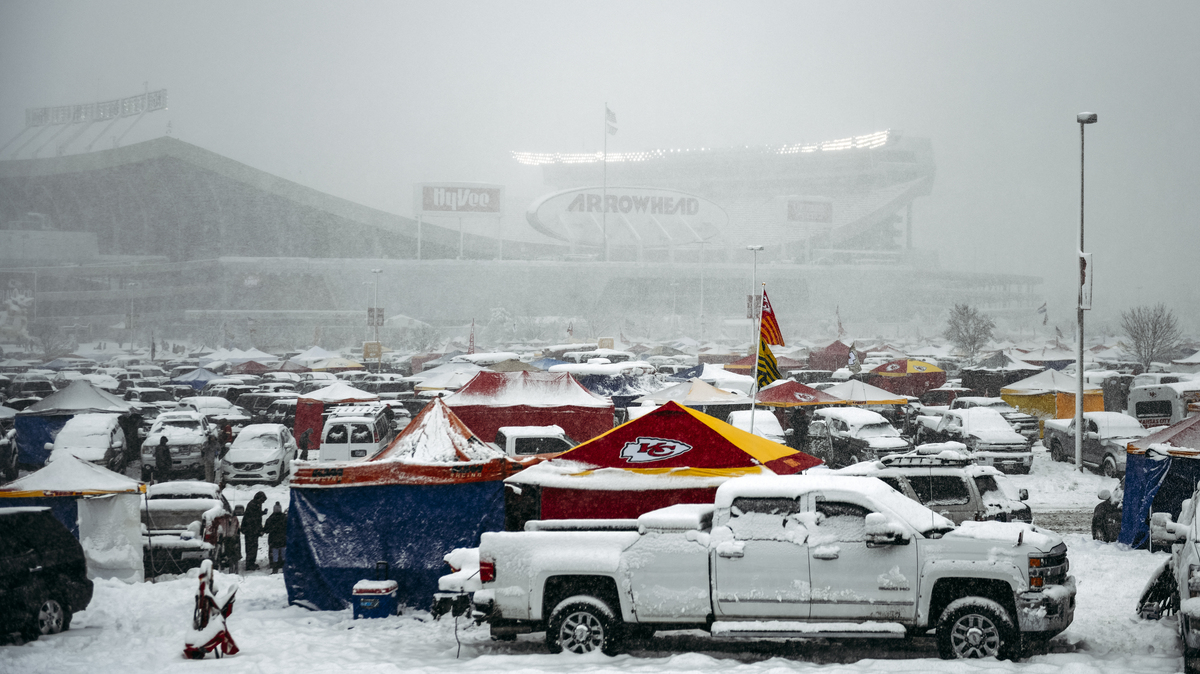 Snow falls on Saturday in Kansas City before a game between the Chiefs and the Indianapolis Colts at Arrowhead Stadium. More than a foot of snow fell in some regions of the Midwest.

Power outages, cancelled flights and hazardous driving conditions continue to plague the Midwest and East Coast as a winter storm sweeps across the country, dumping more than a foot of snow in some areas and causing at least five traffic fatalities.

The storm traveled from the Rockies to pummel the Midwest on Friday and Saturday, before reaching Washington, D.C., Maryland and Virginia, which has declared a state of emergency. Officials are warning of downed trees, power outages and impacts on transportation.

The mid-Atlantic has seen about half a foot of snow and can expect another 7 to 8 inches, in addition to freezing rain and sleet, according to David Roth, a forecaster with the Weather Prediction Center. He attributes the extended intensity of the storm to its shape.

“It’s elongated, that can lead to longer duration events,” Roth tells NPR. “D.C. will end up having at least a day and a half [of snow] … we don’t have that many snow events that last that long.”

Missouri and Kansas took the brunt of the storm on Friday and Saturday, while snow also fell steadily across Iowa, Illinois, Indiana and Ohio. Tens of thousands of households across the Midwest lost power, according to PowerOutage.US.

St. Louis registered just over a foot of snow, and the city of Columbia saw more than 2 feet of precipitation, according to the National Weather Service.

The storm froze bridges, knocked down trees and stranded drivers on blocked highways, including I-65 in Indiana and I-44 in Missouri.

Officials across the region urged travelers to stay off the roads, warning of delays up to eight hours.

Troopers in Missouri responded to nearly 4,000 calls for service and rescued 1,790 stranded motorists, as of Saturday afternoon. There were four fatalities and 57 injuries across the state during the storm.

Deann M. Phillips, 53, and Olivia Phillips, 14, died near Clinton, Mo., after losing control on the snow-covered roadway and travelling into the path of a Freightliner truck, according to highway patrol.

Another Missouri driver, Hope Wilson, 32, died after sliding sideways across US-24 and hitting a car moving in the opposite direction.

In Kansas, a collision of semitrailers caused the death of a 41-year-old driver from Mexico, The Associated Press reports.

On Saturday, Kansas and Missouri officials took to social media to ask residents to watch the weekend’s football attraction – the Kansas City Chiefs hosting the Indianapolis Colts – from home.

In a lighter storm-related moment, the Chiefs released a video of quarterback Patrick Mahomes strolling through the snow at Arrowhead Stadium. The team commented on Twitter, “There’s snow time like Showtime!” Crews worked for hours to clear the field of snow of its coat of snow before the NFL divisional playoff game.

The storm disrupted air travelers as well as those on the road. Dozens of flights were cancelled or delayed at St. Louis Lambert International Airport over the weekend, while United Airlines offered travel waivers for passengers changing flights across the path of the storm. In Columbia, Mo., an American Airlines flight slid off the runway, one Twitter user reported.

As light snow falls are expected to continue in the Midwest, the National Weather Service has issued a winter storm warning for areas in the mid-Atlantic until Sunday afternoon.

Virginia Gov. Ralph Northam declared a state of emergency on Saturday in order to mitigate damage from snowfall, ice and high winds. More than 30,000 people in the state are currently without power, according to PowerOutage.US.

Meanwhile, government employees on social media have commented on the concurrence of the physical storm with the political storm keeping the government locked in a partial shutdown.

“Yes- we have decided the unofficial name of this storm is indeed #snurlough,” Capital Weather Gang wrote on Twitter.