President Donald Trump and French President Emmanuel Macron greet a U.S. veteran during the commemoration marking the 75th anniversary of the Allied landings on D-Day at the Normandy American Cemetery and Memorial in Colleville-sur-Mer. 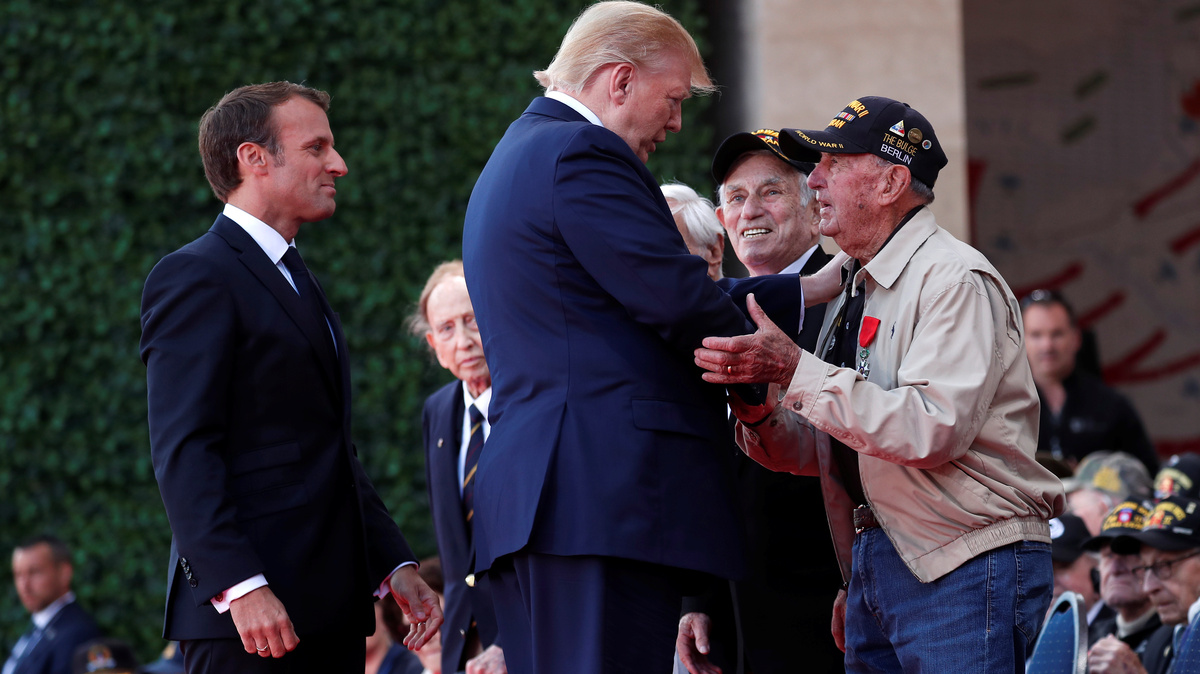 President Donald Trump and French President Emmanuel Macron greet a U.S. veteran during the commemoration marking the 75th anniversary of the Allied landings on D-Day at the Normandy American Cemetery and Memorial in Colleville-sur-Mer.

“They won back this ground for civilization,” President Trump said of the Allied troops who took part in the massive D-Day invasion 75 years ago. Trump stood on a stage near Omaha Beach, alongside French President Emmanuel Macron and other leaders who thanked U.S. veterans and their allies for preserving liberty.

The commemoration in Normandy, France, marks the 75th anniversary of the massive amphibious invasion, in which more than 150,000 U.S., British and Canadian troops forced their way onto France’s coast to bring the fight to Adolf Hitler. They were supported by nearly 7,000 naval vessels and more than 11,000 aircraft, in one of the most important operations of World War II

More than 160 World War II veterans sat in rows on a red-carpeted stage during the ceremony at the Normandy American Cemetery and Memorial in Colleville-sur-Mer. They included dozens of men who landed on France’s shore on June 6, 1944.

“You are the pride of our nation, you are the glory of the republic, and we thank you from the bottom of our hearts,” Trump told the veterans.

In addition to U.S. and French soldiers, Trump noted, Allied fighters also came from Poland, Norway, Australia and other countries. The president said, “They were the citizens of free and independent nations, united by their duty to their compatriots and to millions yet unborn.”

Trump told the stories of several veterans, including former Army medic Ray Lambert, 98, who sat on the stage behind him as the president recounted Lambert’s bravery and fortitude while serving in the 16th Infantry Regiment of the U.S. Army’s First Division, known as “The Big Red One.”

Both Lambert and his brother, Bill, survived a day that began with the massacre of thousands of U.S. soldiers on the beach, the victims of artillery and intense German machine gun fire. Lambert is credited with saving at least 15 men. Despite suffering his own wounds, he repeatedly pulled men out of the water and to safety. He stopped only when a landing craft’s ramp broke his back, forcing him to crawl back onto the sand.

“Ray, the free world salutes you,” Trump said, leading a long round of applause. Both Trump and Macron walked over to Lambert to shake his hand.

Macron spoke of the masses of soldiers who followed, who came ashore in Europe to face battle-hardened troops from Nazi Germany, fighting to win the Battle of Normandy in Operation Overlord. Within three months of the D-Day landing, Allied forces liberated Paris from German occupation.

In English, Macron turned to the veterans on the stage and said, “We know that we owe to you, veterans, our freedom. On behalf of my nation, I just want to say thank you.”

Both Macron and Trump spoke of the young men who did not make it home, after being pulled from their communities to face a global menace. Trump mentioned the nearly 10,000 young Americans who are buried near the beach that was code-named Omaha.

“Each one has been adopted by a French family that thinks of him as their own,” Trump said. “They come from all over France to look after our boys. They kneel, they cry, they pray, they place flowers, and they never forget. Today, America embraces the French people and thanks you for honoring our beloved dead.”

Amid the talk of courage and historic alliances and epic conflict, the ceremony included subtle hints of the complicated political and social dynamics that are reshaping relationships between the U.S., the U.K., and their European allies.

In his speech, Macron pointedly linked the fight for freedom in World War II to longstanding alliances that have recently come under new stress.

“We shall never cease to perpetuate the alliance of free people,” Macron said, citing the creation of the United Nations at the end of the war. He added, “That is what the United States did when it created the North Atlantic Treaty Organization. That is what, a few years later, the leaders of Europe did in bringing about the European Union.”

The lessons of Colleville-sur-mer and of World War II, Macron said, have taught us that liberty and democracy are inseparable.

Macron and Trump left the ceremony together, visiting the nearby cemetery with their wives. The two leaders are scheduled to meet again later today for lunch.

There were at least seven flyovers to mark the D-Day anniversary. According to a pool report, the aircraft included 12 U.S. C-47 Skytrains and two P-51 fighters, along with modern transports and jets — including four F-15s that flew in a missing man formation.

“Despite the forecast of rain, the sun is shining on the American cemetery on the bluffs overlooking Omaha beach,” NPR’s Eleanor Beardsley reports. “There will be 10 ceremonies all along the coast today. Security is tight, with 6,000 police patrolling on land and sea, and drones and helicopters in the skies above.”