John Kelly took over as chief of staff six months into the Trump presidency, and he initially helped bring military discipline to a sometimes chaotic White House. 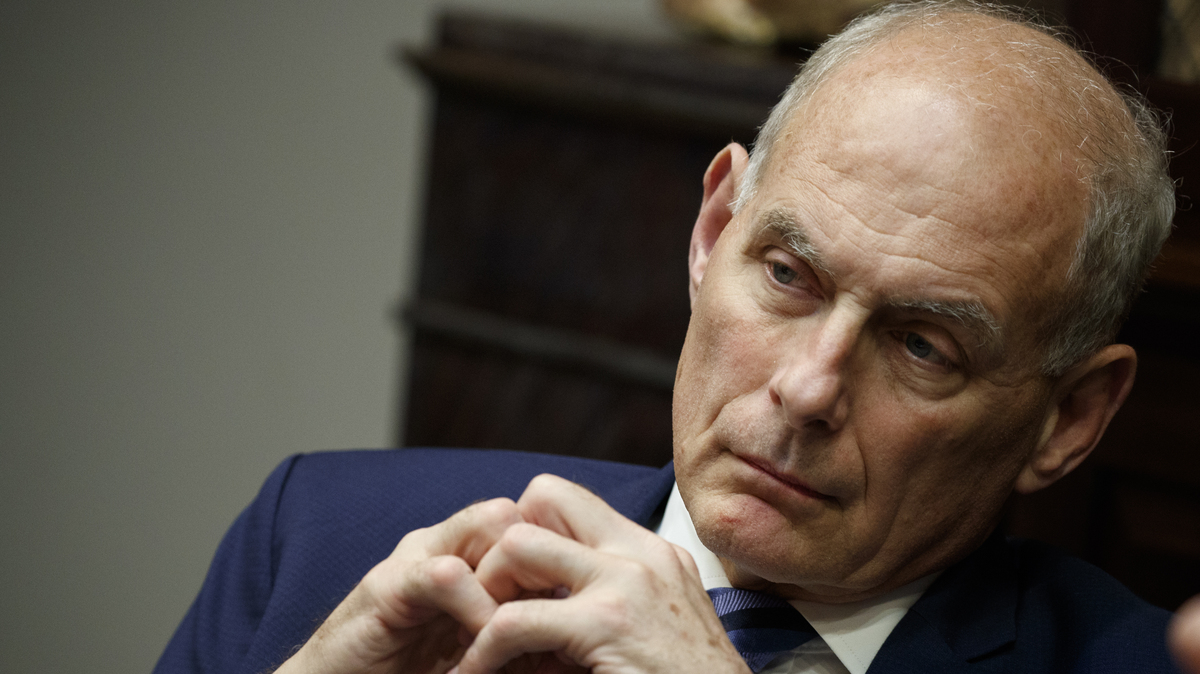 John Kelly took over as chief of staff six months into the Trump presidency, and he initially helped bring military discipline to a sometimes chaotic White House.

White House chief of staff John Kelly will leave “toward the end of the year,” President Trump said on Saturday. It is the latest administration shakeup as Trump makes adjustments following the recent midterm elections.

“John Kelly will be leaving — I don’t know if I can say ‘retiring.’ But, he’s a great guy,” Trump told reporters on the South Lawn of the White House.

Trump did not announce who would replace Kelly but said that would come in a day or two.

Kelly took over as chief of staff six months into Trump’s presidency, and he initially helped bring military discipline to a sometimes chaotic White House. But Kelly ran afoul of the president, who doesn’t like feeling “managed,” and gradually relaxed his grip on the West Wing. As frustrations mounted over the rising level of illegal immigration, Kelly reportedly suffered a bruising public battle with national security adviser John Bolton.

“The last thing you can afford to do as chief of staff to the president is become the headline rather than the person working in the background,” said Leon Panetta, who served as former President Bill Clinton’s chief of staff and worked with Kelly at the Pentagon.

Controlling immigration was at first a source of praise for Kelly, who presided over a dramatic drop in illicit southern border crossings while serving as homeland security secretary at the start of the Trump administration. When Trump decided to ditch his first chief of staff, Reince Priebus, he tapped the retired Marine general to take over.

From the beginning, they made an odd couple: the career military man who spoke of women as “sacred” and the freewheeling businessman president who never served in uniform and was caught on tape discussing women in crude terms.

“Working in the White House is the hardest thing I’ve ever done,” Kelly told NPR in May 2018.

Kelly saw his role in the White House as Trump’s gatekeeper, even if the president didn’t want one. He stopped aides from wandering freely in and out of the Oval Office. And he insisted that any news clippings or other paperwork go through him before reaching the president’s desk. 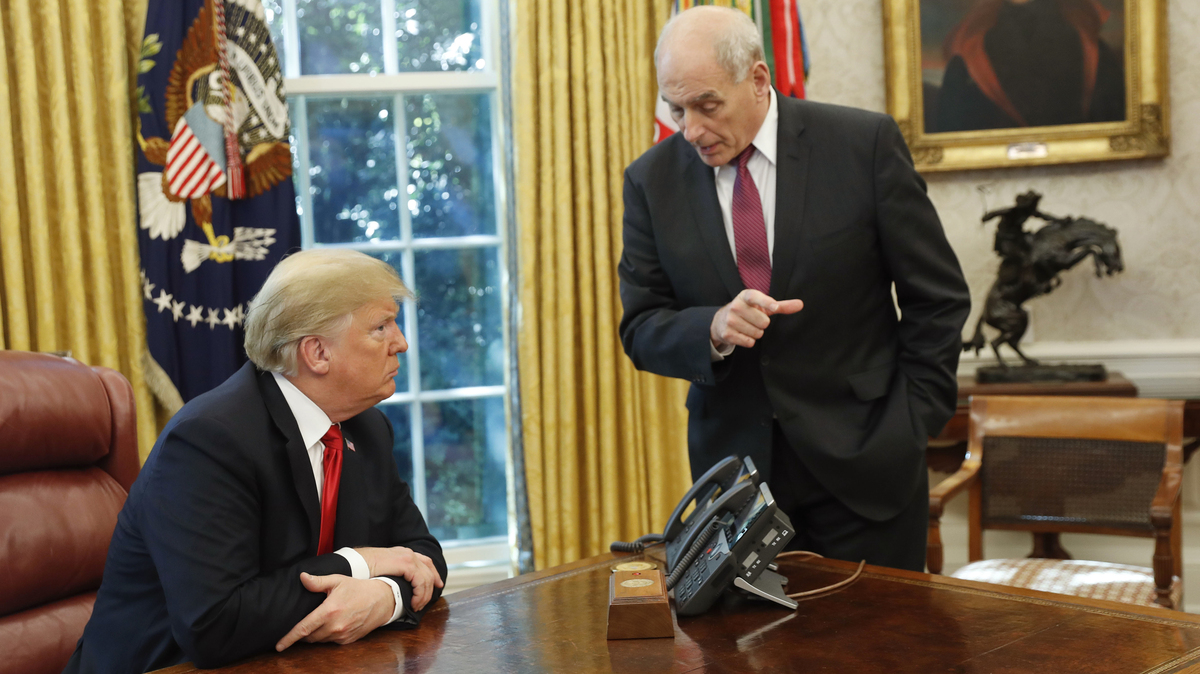 Kelly couldn’t stop Trump from tweeting, though, nor from speaking off the cuff. Cameras sometimes caught the chief of staff with a seemingly pained expression after one of Trump’s more provocative remarks. (Kelly has argued, “You guys with the cameras always catch me when I’m thinking hard, and it looks like I’m frustrated and mad.”)

Kelly told Fox News, “I was not put in this job to change the way the president of the United States does business. I was put in the job to make sure the staff process better informs him on a range of issues.”

Trump reportedly bristled at any hint that Kelly was the power behind the president. After Kelly told lawmakers in January 2018 that Trump’s position on the border wall had evolved with his coaching, Trump tweeted, “The Wall is the Wall, it has never changed or evolved from the first day I conceived of it.”

Kelly reportedly soured on the president as well. NBC reported in the spring of 2018 that Kelly called Trump “an idiot” on more than one occasion — a charge that Kelly described in a statement as “total BS.”

While Kelly was initially seen as an apolitical manager, he shared Trump’s get-tough philosophy on immigration, and some saw his position as hardening the president’s own.

Kelly endorsed the controversial and short-lived policy of separating immigrant parents and children in an effort to deter illegal crossings at the southern border. But he did not echo the president’s ill-founded claim that immigrants who illegally cross the border spread crime or violence.

“The vast majority of the people that move illegally into the United States are not bad people. They’re not criminals. They’re not MS-13,” Kelly told NPR. “But they’re also not people that would easily assimilate into the United States, into our modern society. They’re overwhelmingly rural people in the countries they come from — fourth-, fifth-, sixth-grade educations are kind of the norm. They don’t speak English. Obviously that’s a big thing.”

Some trace Kelly’s attitude on immigration to the years he spent in Latin America as head of U.S. Southern Command.

It was the capstone to a 45-year military career that also included combat service in Iraq.

“When I was a kid, every man in my life was a veteran,” Kelly told reporters in 2017. “We don’t look down upon those of you that haven’t served. In fact, in a way we’re a little bit sorry because you’ll never have experienced the wonderful joy you get in your heart when you do the kinds of things our service men and women do — not for any other reason than they love this country.”

Then-head of the U.S. Southern Command Gen. John Kelly arrives at the Guatemalan air force base in Guatemala City in March 2015.

Kelly’s son Robert, a Marine lieutenant, was killed by a landmine while serving in Afghanistan. Kelly spoke proudly of the men and women in the military, even if he sounded almost contemptuous of the country they were sworn to defend.

“They are the very best this country produces,” Kelly said. “When I was a kid growing up, a lot of things were sacred in our country. Women were sacred, looked upon with great honor. That’s obviously not the case anymore as we see from recent cases. Life — the dignity of life — is sacred. That’s gone. Religion, that seems to be gone as well.”

Kelly vigorously defended a former White House staffer who was accused of domestic violence by two ex-wives — a charge the former staffer denies. The chief of staff also became a lightning rod when he described some young immigrants as “lazy.”

“I think a lot of what he is confronting, very frankly, involves political judgment,” Panetta said. “He is first and foremost a Marine. He is not a politician.”