California Says Its Cannabis Revenue Has Fallen Short Of Estimates, Despite Gains

California says revenue from marijuana sales has risen — but analysts say the illegal market is still thriving. Here, an employee puts down an eighth of marijuana after letting a customer smell it at the Magnolia cannabis lounge in Oakland. 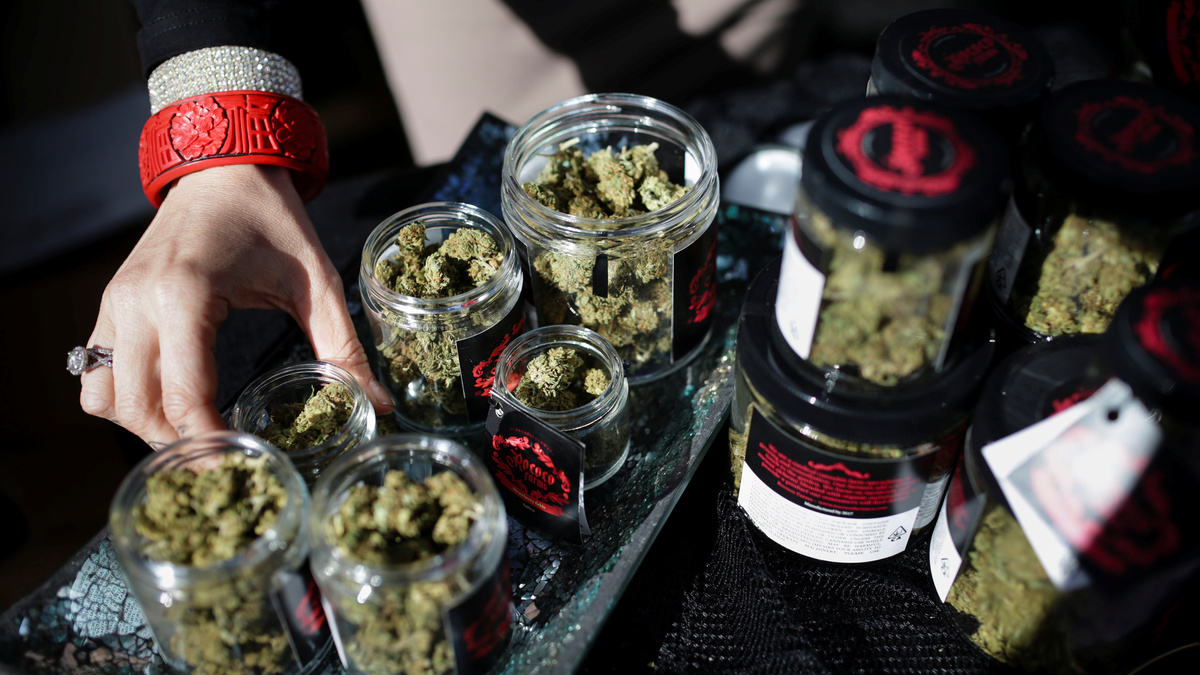 California says revenue from marijuana sales has risen — but analysts say the illegal market is still thriving. Here, an employee puts down an eighth of marijuana after letting a customer smell it at the Magnolia cannabis lounge in Oakland.

California’s cannabis excise tax generated only $74.2 million in the second quarter of 2019, the state says, announcing numbers that are short of projections that were set months ago. It’s the latest sign that the country’s largest marijuana market has struggled to take off since sales of recreational pot became legal last year.

The second-quarter figure reflected a gain over the $63.1 million excise revenue from the first three months of 2019. But earlier this year, the results prompted Gov. Gavin Newsom to revise his office’s estimates of how much money the state would net from its cannabis industry.

In May, Newsom’s budget lowered its expectations for the cannabis excise tax, to $288 million in the current fiscal year and to $359 million in 2020.

Compared to other states, California’s legal cannabis market has stumbled rather than soared. When California moved from a loosely regulated medical marijuana system to a fully regulated retail system in 2018, it watched legal sales drop to $2.5 billion, from around $3 billion the year before.

“After adjusting for population, the Golden State raised the second-least amount of revenue from cannabis taxes during the second quarter among states with legal sales, ahead of only Massachusetts,” according to the Institute on Taxation and Economic Policy.

The result was a departure from the spikes seen in states such as Colorado, Washington and Oregon after those states legalized recreational markets.

“What had happened was that those markets typically doubled in the first year,” says Tom Adams, of the cannabis industry research firm BDS Analytics. In those three states, he adds, they “posted 50 to 90 percent compound annual growth for three years straight.”

As for what’s holding California back, Adams says licensed stores can be hard to find, because many local areas have refused to allow retailers to open. And then there are the tax and regulatory costs: In addition to requiring wholesale distribution, California imposes a number of levies on the cannabis industry.

“It’s typically 9% to 11% retail sales tax” in California, Adams says. But local city and county governments can impose their own taxes on cannabis products, and those rates vary widely.

California also imposes a 15% excise tax, along with a cultivation tax of $9.25 that growers must pay for each ounce of dried cannabis flowers.

Of the decision to levy a set tax that’s based on weight rather than on a fluctuating market price, Adams says that if “instead of going with a percentage of revenue tax you go with a per ounce tax, that gets painful really quickly.”

Confronted with high taxes in the legal market and new requirements for getting an annual medical marijuana card, many cannabis users in California have turned to the illegal market. The number of medicinal customers has shrunk drastically in the past year, Adams notes. And he says the state’s rules about keeping inventories separate for recreational and medicinal sales have either increased costs or prompted some retailers to abandon the medical market altogether.

In addition to the state excise tax, California’s cultivation tax pulled in $22.6 million and its state sales tax totaled $47.4 million, for a total cannabis revenue boost of $144.2 million for the second quarter, the California Department of Tax and Fee Administration reported this week. The state’s figures do not include taxes collected at the local level.

Despite the market’s challenges, BDS Analytics released a report earlier this month that predicts California’s legal cannabis sales will grow by 23% in 2019 to $3.1 billion, and will rise to $7.2 billion in 2024. But the firm also believes that even five years from now, the illicit market will still account for 53% of all cannabis sales in California.

By contrast, the firm says, “States with more supportive regulatory regimes are expecting illicit sales to make up less than 30%” of all sales.