A Push To Have Cars Say ‘No’ To Drunk Drivers

The Driver Alcohol Detection System for Safety Program, funded largely by the federal government, seeks to develop devices that will automatically detect when a driver is intoxicated with a blood-alcohol concentration over the legal limit. 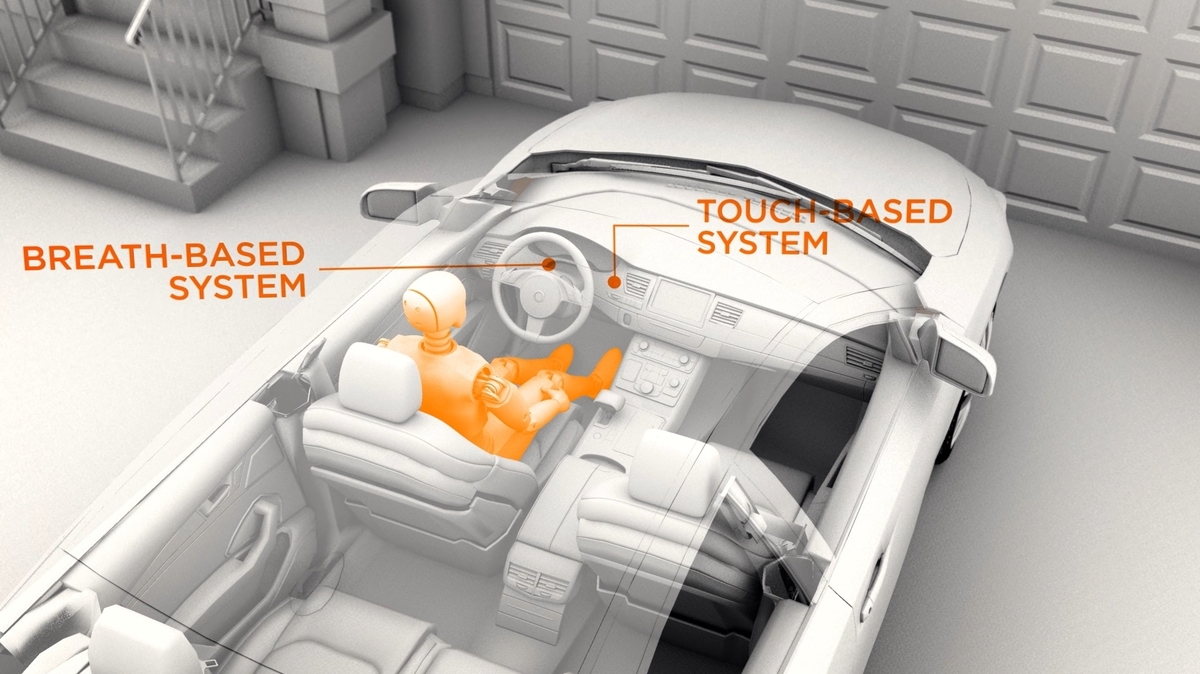 The Driver Alcohol Detection System for Safety Program, funded largely by the federal government, seeks to develop devices that will automatically detect when a driver is intoxicated with a blood-alcohol concentration over the legal limit.

As cars become smarter and safer, some members of Congress want to require them to be built to prevent drunk driving.

The Reduce Impaired Driving for Everyone Act of 2019, called the RIDE Act, would also allocate $10 million to continue government-funded research into new breath and touch-based sensors designed to monitor a driver’s blood alcohol level in real-time, without having the driver do anything. The measure would set aside another $25 million to install and test the technology in government-owned fleets.

The bill follows a similar effort in the House by Rep. Debbie Dingell, a Democrat from Michigan.

Udall said he’s been haunted by the pain and havoc drunk driving accidents wreak on families for decades. “When you meet with families, and when you see the devastation that this causes, it’s something that really moves you,” he said in an interview.

During the 1990s, when Udall was New Mexico’s attorney general, he agonized over how to reduce the state’s drunk driving related crashes, which at the time were the highest in the country per capita.

“We kept trying to wonder, how do we get out of this?” he recalled.

The answer, at least in part, was technology. New Mexico became one of the first states to require convicted drunk drivers to use a breathalyzer to start a car.

But in a world where driverless cars are being tested, Udall said he’s become exasperated by the lack of innovation and buy-in from the auto industry. He is urging auto manufacturers to partner and fellow lawmakers to commit to a five-year plan to develop less cumbersome and more consumer friendly devices.

“I don’t think the industry wanted to put in airbags or seat belts,” Witty said. “Think about how those … were a fight to get through.”

But now, she said, several companies have cameras that warn drivers if they appear impaired or have taken their eyes off the road. Those types of advances have given Witty hope that automakers will be persuaded by consumers, who want more safety features.

But she is impatient for that to happen. In 2000, Witty’s 16-year-old daughter was killed by another teen who’d had too many tequila shots and was driving 65 miles per hour in a 30 mph zone. According to Witty, the young driver, who was drunk and high on marijuana, “lost control of her car and spun off the road onto the bike path” where her daughter was rollerblading.

“And so my daughter, Helen Marie, looked up and saw the car coming toward her and there was nothing she could do at all but die,” Witty said.

It’s a tragic story that Witty has been telling for years to educate the public. She’s hopes the message will help spare other families the pain of her own.

“Not only did her life end, the life that we had as a family ended. … We had to figure out how to live again,” she added.

Drunk driving fatalities have declined significantly since the 1980s. But according to the National Highway Traffic Safety Administration they still account for about a third of all traffic deaths. In 2017, more than 10,800 people were killed in drunk driving incidents.

Since 2008, the federal government has spent $50 million on a project between NHTSA and an automaker group called Automotive Coalition for Traffic Safety to develop the Driver Alcohol Detection System for Safety.

The endeavor is overseen by Robert Strassburger, who represents the automakers. He expects a breathalyzer-type product to be ready for licensing by next year. While the ultimate goal of the project is aimed at creating something that detects alcohol without the driver doing anything, Strassburger said, they’re not there yet. After more than a decade of work, researchers have managed to develop a more streamlined version of a breathalyzer — a small device built into the driver-side door that the driver blows into.

However, the device is can’t detect a precise blood alcohol level yet. Instead, it can only determine the presence of alcohol, Strassburger said.

So it can’t tell the difference between someone who’s had one glass of wine and someone who’s had four shots of whiskey. Still, Strassburger said, there’s already a market for the device, including trucking companies with a zero-tolerance policy for their drivers or parents with underage children.

Strassburger says there’s plenty of momentum to make vehicles with technology that keeps dangerous drivers off the road.

The question is how that will happen and when.