A Fugitive In His Own Country, Venezuela’s Juan Guaidó Insists His Movement Is Strong 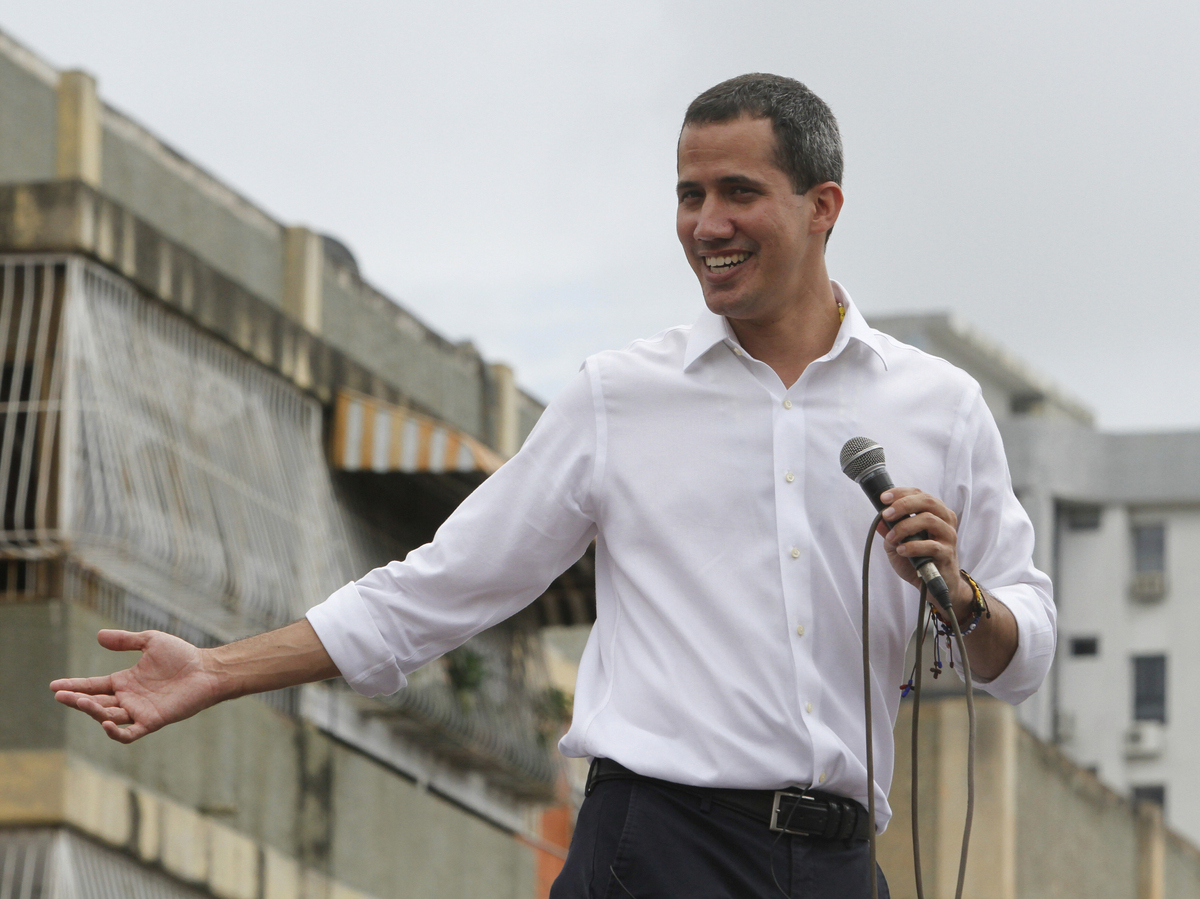 Juan Guaidó’s war room is a kind of no man’s land.

The opposition leader, who is recognized by dozens of countries as Venezuela’s rightful head of state, works out of a mostly vacant office in a Caracas high-rise that features a couple of sofas, broken swivel chairs and carpet that could use a cleaning.

Guaidó has spent the past five months moving between safe houses and borrowed office space to keep government security agents, who have arrested dozens of opposition leaders, off balance. No one bothers to fix things up as his team may be moving on soon.

Seated at a table nursing a glass of water, Guaidó, 35, seems tired. His eyes are intense — and bloodshot. He’s dealing with multiple challenges, including on-again, off-again negotiations in Norway between the opposition and representatives for authoritarian President Nicolás Maduro. He is just off the phone with U.S. Vice President Mike Pence, one of his most vocal supporters.

During a break on Wednesday afternoon, he sat down for an interview with NPR to discuss his efforts to bring about regime change in Venezuela, which is suffering from hyperinflation, power outages, and chronic shortages of food, medicine and fuel.

Here are the highlights:

On recent negotiations in Oslo, Norway: Guaidó said two rounds of talks this month had yielded no concrete results. The Norwegian government also brokered a 2016 peace deal between neighboring Colombia and Marxist guerrillas which took four years. But Guaidó said Venezuelans don’t have the luxury to take so long because people are dying by the day.

“Time is not on our side,” he said. “Time is running against all Venezuelans.”

Still, he said the opposition remains open to more talks.

On what the opposition demands: Guaidó said that Maduro must leave office and that Venezuela could then hold free and fair elections.

Asked if a Maduro government could oversee new elections, Guaidó referred to fraud-marred balloting last year and said, “We can’t have another false election. Maduro, as president would manipulate the elections. We need an impartial electoral council and international observation.”

Asked if Maduro should be allowed to participate in new elections, he didn’t answer, but said that given the president’s low job-approval rating, Maduro would be “the worst candidate that the ruling Socialist Party could field.”

On why his April 30 call for a military rebellion fell on deaf ears: Guaidó claimed most military officers do not support Maduro, but fear reprisals should they be caught conspiring with the opposition. He added that Cuban counterintelligence agents keep a close watch on the barracks.

“The main factor is fear and we have to figure out a way to overcome the fear,” Guaidó said. He denied that the April 30 uprising was a mistake and declared, “I would do it again.”

On his close ties to U.S. officials and the possibility of a foreign invasion: Referring to what he described as the presence of Colombian guerrillas and Cuban agents in Venezuela, Guaidó said, “we already have foreign military intervention.”

He said he would prefer a peaceful solution to the country’s problems, but said that throngs of Venezuelans are already dying on a daily basis thanks to shortages of food and medicine.

“If you ask any Venezuelan, ‘How do you think we should get out of this crisis?’ They will say: ‘By any means necessary.’ Kids are dying, so the [military] option could be a way to stop the tragedy and the humanitarian catastrophe.”

On where the opposition goes from here: Guaidó said, “We can’t be afraid to maintain hope” for a better future. He claims the opposition remains united and is far stronger than it was six months ago, thanks to international recognition, growing foreign pressure on Maduro, and efforts by Norway and other countries to promote a negotiated solution.

On the risks he faces: Guaidó noted that his chief of staff was recently jailed and that his brother has gone into exile to avoid an arrest. But the Maduro government has been warned by U.S. officials not to touch Guaidó and he says he is taking advantage by traveling the country and speaking to large crowds. By contrast, he said Maduro would get shouted down.

“I go everywhere, unlike Maduro, who can’t show his face to the Venezuelan people,” he said.