Why Suburban Moms Are Delivering Your Groceries

“I had one day, I worked six hours and made $50. It really wasn’t worth it. … But it doesn’t happen that often,” says Hilary Gordon, who works as a shopper for the grocery-delivery app Instacart in Sacramento, Calif. “The other day I worked 11-and-a-half hours and made $265. Great? No. But good.” 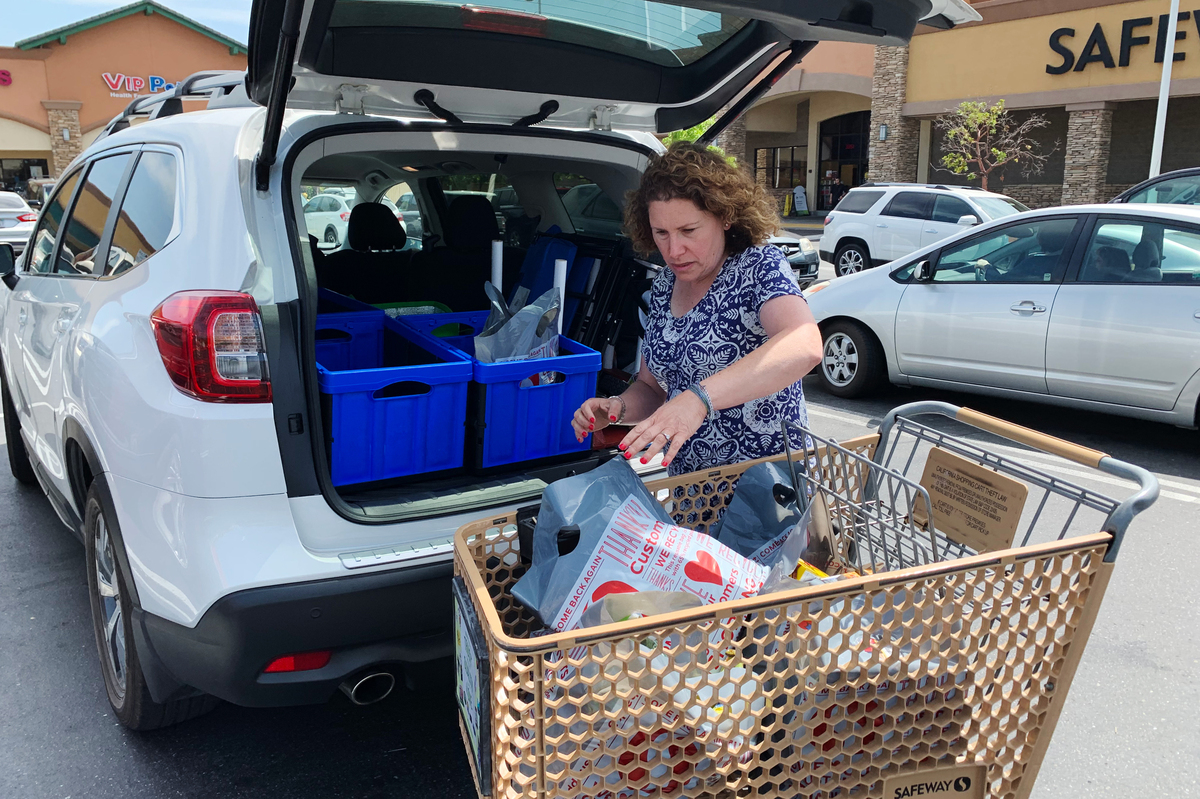 “I had one day, I worked six hours and made $50. It really wasn’t worth it. … But it doesn’t happen that often,” says Hilary Gordon, who works as a shopper for the grocery-delivery app Instacart in Sacramento, Calif. “The other day I worked 11-and-a-half hours and made $265. Great? No. But good.”

At 6:30 am, four of five Gordon family members are roaming around their suburban Sacramento house — if you only count the humans. There’s also four dogs, a bunny, a tortoise, chickens, ducks, goats, and a not-so-miniature miniature pig named Squiggy.

Hilary Gordon is discussing the day’s schedule with her husband in the middle of wrapping a breakfast sandwich for their 14-year-old, checking on cereal for their 17-year-old, and staring down their 11-year-old who just realized he forgot to finish today’s math homework.

Having time like this with her family is a major reason why Gordon, 47, works as a shopper for the grocery-delivery app Instacart, in a suburb of Sacramento. “I find it fun. It gives me something to do, I’m not out spending money. And I love the flexibility,” she says.

Instacart is one of a slew of similar apps — DoorDash, Postmates, Shipt — paying tens of thousands of workers like Gordon to deliver packages, food or groceries to strangers. Similar to those who drive for rideshare apps Uber and Lyft, delivery workers can choose when to work. But they don’t have to invite strangers into their cars.

This draws women — often in their 40s and 50s — who now make up more than half of the contractors working for major food delivery apps.

Instacart told NPR more than 50% of people who shop for the app are women. DoorDash said women make up more than 50% of its “dashers” in rural and suburban areas, and more than 60% in urban areas. Target’s Shipt declined to share this statistic. Postmates said an April survey of its workers showed 48% were female, and 38% had a child at home.

Gordon and a half-dozen other women shared details of working for delivery apps to NPR, which paint a picture of the epitome of gig work: Accessible but high-intensity, with pay that’s quick but unpredictable and hours that are flexible but unreliable.

“I tell people, it’s a great thing to have, if you’re looking for extra money but you don’t really need it,” said Christina Lewkowitz, 50, who works for Instacart, DoorDash, Shipt, Deliv and a vineyard in Sacramento.

‘I will not work for free’

After splitting up school drop-offs with her husband, Hilary Gordon parks her Subaru SUV in a grocery store parking lot. Her Instacart shift today is 8 am to 6 pm. She’s got her shopping sneakers on and a fully charged phone — watching the screen for incoming grocery orders, which she will both shop and deliver.

The first “batch,” as they call it, is a bust: $8 with no tip, for seven items, to be taken 4 miles. But the store is 8 miles away. Instacart says it pays 60 cents per mile for delivery to the customer, but doesn’t pay for the drive to the store in the first place. The company explains that it can’t be sure that the worker, for example, isn’t doing a non-Instacart gig until they begin shopping.

Before accepting an orders, Gordon estimates the cost of gas for the drive to and from the store. She looks out for addresses known to require climbing stairs and very heavy items like a 50-pound bag of dog food or 13 cases of water. 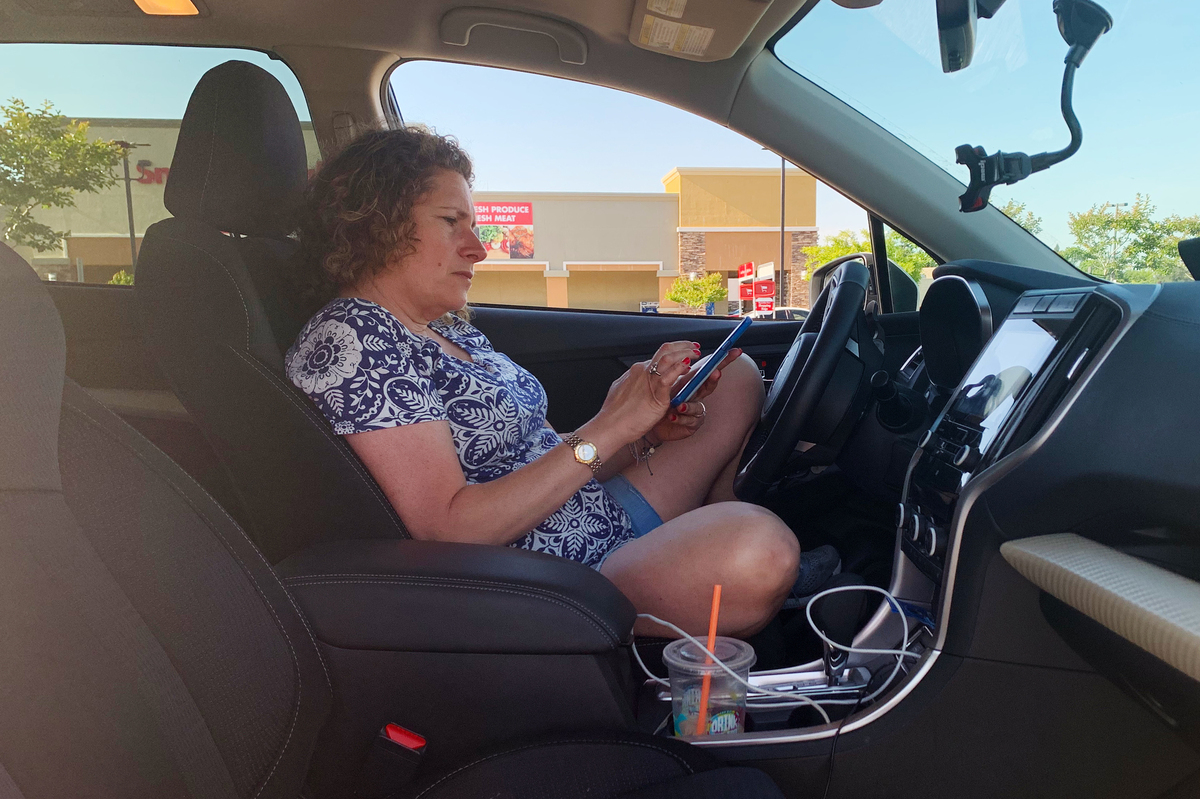 Before accepting an orders, Gordon estimates the cost of gas for the drive to and from the store. She looks out for addresses known to require climbing stairs and very heavy items like a 50-pound bag of dog food or 13 cases of water.

Logging miles is a big cost of the job. Some days Gordon might drive a hundred miles, filling up the tank at least once a day. For every order, she does quick math to calculate the gas expense. This $8 order doesn’t cut it. Gordon picks one of her canned responses to Instacart: “Pay too low. I will not work for free!”

“It’s really hard to say yes to that, because you feel like, then they’re thinking, ‘Oh, well, see, they’ll work for that’ — and I don’t want to work for that,” Gordon says.

But you can’t skip too many orders — the app will think you stopped working. Gordon gets a good one: eight items, for $9.87 plus a promise of a $6 tip. But most importantly, it’s only 1.5 miles of driving. She can knock it out in about 20 minutes.

Shopping for other people is a bit like a scavenger hunt, except the app is timing you. You rush through the whole store, scanning every item that goes in the basket and messaging the customer with updates.

Gordon checks each bell pepper for blemishes, throws a hail-mary on the ripeness of avocados, tells Instacart that “organic celery” is out of stock. The app suggests she grab “spring water” instead. Gordon laughs out loud.

After almost a year and a half with Instacart, Gordon says she still loves grocery shopping. And she especially loves meeting new people — chatting up store workers for help and playing with friendly pets she meets at customers’ homes.

Like a lot of gig workers, this is not a career Gordon pictured for herself. She has two master’s degrees — in counseling and family therapy.

She worked as a therapist in other states, but a move to California required more classes and exams, right as her oldest was born. Gordon became a social worker, until she made the calculation familiar to many working women: Her job took up mornings and evenings, with a not-so-great salary.

“When you’re going to pay the majority of it to let someone else raise your kids? Just didn’t make any sense,” Gordon says.

After a week off for college visits, Gordon is hustling to keep up the number of hours worked for Instacart. She has to log at least 90 hours in three weeks to get “early access” to the app’s schedule of shifts. It’s the only way she can get predictable and long enough hours to make the gig worth it for her. 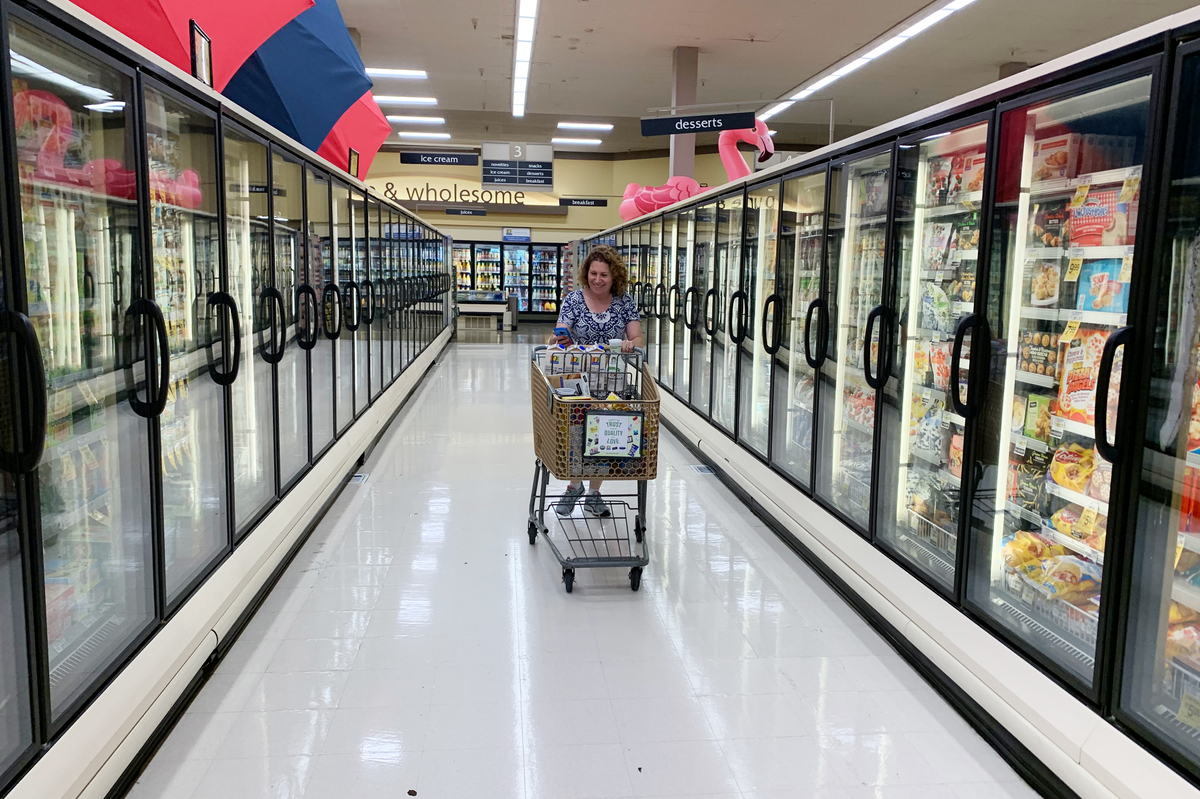 After a week off for college visits, Gordon is hustling to keep up the number of hours worked for Instacart. She has to log at least 90 hours in three weeks to get “early access” to the app’s schedule of shifts. It’s the only way she can get predictable and long enough hours to make the gig worth it for her.

This rhythm is all-too familiar for women doing app work. Gigs help cover some expenses of child and health care — an opportunity for side-income on top of a steadier job, either the deliverer’s or their partner’s. Workers who do app-based jobs to supplement income is a growing cohort within the gig economy, says Shelly Steward of the Future of Work Initiative at the Aspen Institute.

Gig workers are often “independent contractors” who don’t get benefits like health insurance or sick leave. And when families piece together multiple jobs and gigs to make a living, “the system of workplace benefits that’s been in place does not adequately cover nearly as many workers,” Steward says.

Stacie Ballard, 43, pieces together work for at least seven apps while building her own business in Atlanta. She keeps a stack of t-shirts in her trunk — green for Instacart, green and white to walk dogs for Wag, green and grey to deliver packages for Shipt — changing between gigs as she earns extra cash for her teenager’s graduation and other expenses.

“If you’re a mom or a caregiver or something, it’s really flexible,” Ballard said. “It can be frustrating when you know you have certain bills that are coming up, and you’re like, ‘Ok, I need to make this much money. Hopefully tomorrow is better,’ But so far it’s always worked out.”

All the things to consider

Ballard, like many women in the gig economy, works for apps part time. For one, hustling full-time is exhausting. But also, hours can be hard to get.

On Instacart, available hour-long shifts get claimed within seconds, workers said. Part-time workers like Ballard and Lewkowitz often stalk the app all day, hoping to grab some.

Instacart says it’s announced a pilot of a new way to qualify, which would encourage good customer ratings instead of long hours.

Even for full-timers like Gordon, signing up for shifts is “anxiety-inducing.” She describes frantic clicking on Sunday mornings, when the schedule opens, selecting all the hour-slots before they get claimed, within minutes.

And after all that, as any gig worker knows, having more hours doesn’t assure a huge paycheck bump. It might be a slow day, or long distances might make orders not worth the cost of gas. Workers also consider less obvious cost of these jobs. Is the order too complicated and time consuming? Too heavy?

Once, Gordon accidentally accepted a Costco batch with 81 cases of water. She says Instacart told her she could do multiple trips, but she refused and had to return — and ultimately give up — the whole order. So today, Gordon is eagle-eyed, spotting 13 cases of water in an otherwise appealing $32 batch.

One final thing she always checks is whether she knows the delivery address. Many delivery workers keep a mental track of locations that require climbing stairs, like apartments without elevators. On Gordon’s mental list are also a house with the guy who greeted her in a robe, and an older man who pressured her into bringing his groceries inside and said he’d been tracking her.

And then there’s the matter of tipping. Orders from businesses are notorious for being large and lacking tips. Workers say they wish the apps more aggressively encouraged their users to tip. Instacart recently changed its tipping system and retroactively compensated workers after workers and labor advocates fought a policy that counted tips toward base payments that Instacart promised for deliveries — sometimes offsetting what Instacart paid out of its own pocket.

Today, Gordon delivered eight orders in 10 hours, and made $133, before extra bumps for heavy orders and good reviews. Today was okay. There was one day when she made $50 in six hours. That wasn’t worth it. Gordon’s best day’s haul was $255 — when she worked almost 12 hours.