Why A $790 Balenciaga Hoodie Has A World Food Programme Logo

Kanye West wore a Balenciaga shirt with the World Food Programme’s logo on it while visiting an orphanage near Kampala, Uganda, in October 2018. On this trip, he gifted bags full of his $220 Yeezy sneakers to the children. 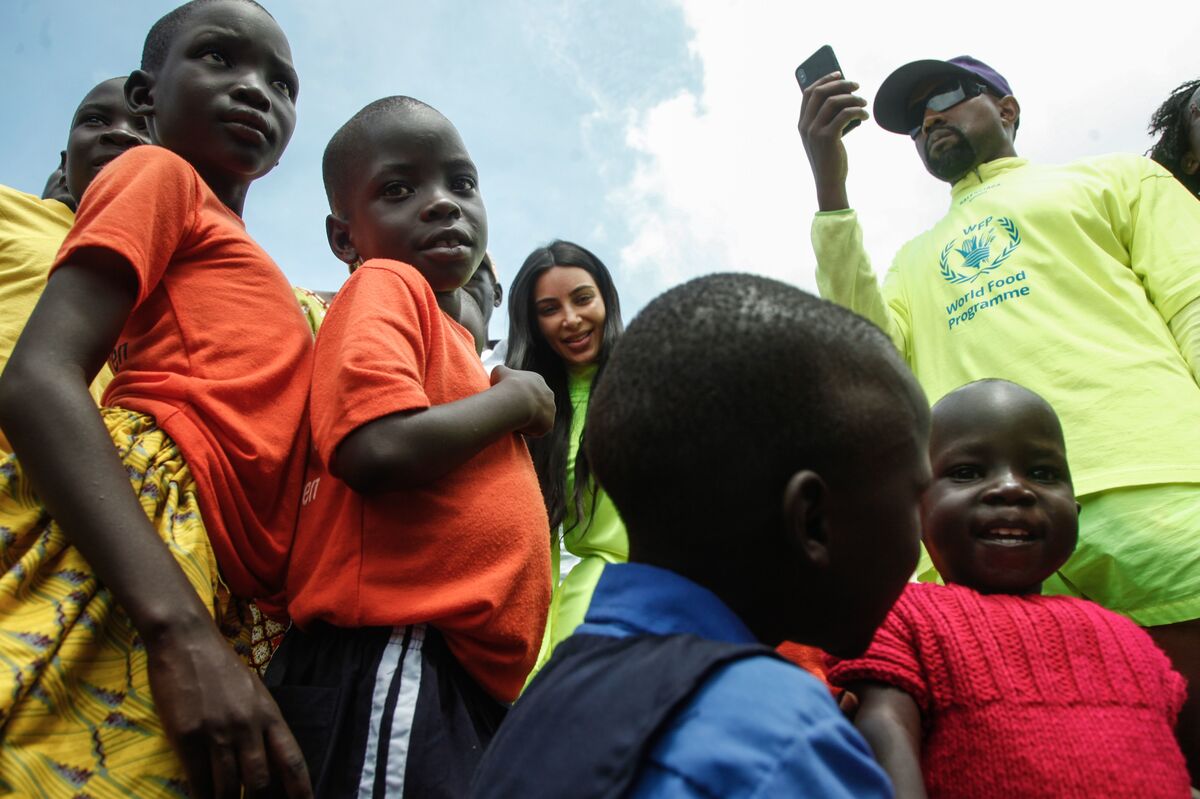 Kanye West wore a Balenciaga shirt with the World Food Programme’s logo on it while visiting an orphanage near Kampala, Uganda, in October 2018. On this trip, he gifted bags full of his $220 Yeezy sneakers to the children.

It’s a cotton T-shirt. It costs $395. It’s from Balenciaga, the luxury brand. And it bears the logo of the World Food Programme, the U.N. agency that provides food aid to disaster zones.

The shirt is part of a line of WFP-emblazoned streetwear, with some of the proceeds going to the charity. The collection, which also includes a $790 sweatshirt and $850 fanny pack, launched last year, and people in the aid community are debating: Is this a good way for a charity to promote itself?

The idea of buying an item of clothing, with a portion of the purchase price donated to a good cause, has been around for a while. Since 2006, (RED) has teamed up with brands like Apple, Gap and Emporio Armani, selling everything from iPhones to lip balm and donating $600 million from the purchases to the Global Fund to Fight AIDS, Tuberculosis and Malaria. In 2013, Gucci sold a $1,000-plus leather bag to benefit UNICEF. And Bulgari sells jewelry items like a $770 silver necklace with the Save the Children logo — and some proceeds going to the charity.

Balenciaga’s collaboration with the WFP has brought renewed attention to this type of charity partnership. Partly it’s because of the high prices charged for items that usually sell for far, far less. And partly it’s because of the desire of WFP to have their logo displayed on the bodies of celebrities and “influencers” — people who have huge followings on social media.

The charity and fashion house are transparent about the financial arrangement — up to a point. According to Balenciaga, 10% of the sale price of each item in the collection — sold online and at retail stores like Barneys New York and Saks Fifth Avenue — goes to the U.N. agency. In addition, Balenciaga donated $250,000 to the U.N. agency when the collaboration was set up.

NPR asked Balenciaga how much the partnership has raised. Lionel Vermeil, a spokesman for Balenciaga, wrote in an email: “We never break down our sales figures.”

McDonough, however, says the collection has been “very successful” and that the 10%-per-item contribution has brought in “a significantly larger contribution than the initial donation” from Balenciaga of a quarter of a million.

Still, it’s not much compared to what the U.N. agency normally gets from its big funders, says Jason Wojciechowski, a fellow at the Center for Impact Communication and the creative director of Corelab, an agency that has worked on digital campaigns for U.N. agencies and aid groups such as Oxfam and Save the Children. The WFP raised $7.4 billion in contributions last year, with $85 million from private donors.

But the partnership with Balenciaga is “not just a matter of the financial resources,” says Challiss McDonough, senior communications officer for the World Food Programme. As global crises become longer and more complicated, the demand for food aid is going up — and so is the cost. McDonough says WFP is looking to all kinds of ways to bring attention to the charity’s work. “WFP has relatively limited name recognition” in high-income countries, she says.

The goal of the partnership is to expose the U.N. agency to a wider network of influencers, adds McDonough. “Balenciaga could offer reach and visibility in a way that [WFP has] not tried.”

Indeed, the brand is a favorite among high-profile celebrities like Kylie Jenner and Kim Kardashian and uses its powerful social media presence to spark fashion trends (its $1,290 T-shirt shirt — a shirt, sewed onto another shirt — became a viral meme). And this year, the brand is on track to make more than $1.1 billion in sales.

Wojciechowski, who has worked on developing corporate partnerships for U.N. agencies, says that the World Food Programme’s strategy has potential. “In the attention economy, where eyeballs and media coverage are the ultimate currency, working with a brand that influencers already wear has value.”

Indeed, there are benefits when a star wears a WFP logo. In December, for example, Christina Aguilera was pictured in The Daily Mail in what was described as “an all-black outfit complete with a Balenciaga World Food Programme baseball cap which supports the World Food Programme.”

And the garb is certainly getting eyeballs: This Instagram video of the rapper 2 Chainz in his WFP sweatshirt has half a million views.

But the clothing has also worn by celebrities who bring controversy along with attention. Unlike the carefully vetted U.N. ambassadors that are selected to represent the agency, the World Food Programme has no control over who buys and wears items from the collection in public settings.

In October, for example, the rapper Kanye West was photographed in his logo shirt on a visit to an orphanage in Uganda, where he gave away bags full of $220 Yeezy sneakers to the kids. West was slammed on social media for giving the children luxury items instead of more practical goods.

In a statement to NPR in October, McDonough wrote: “It should be noted that Kanye West is not in a formal partnership with the World Food Programme and his activities in Uganda were not organized or funded by WFP.”

A March post from the hip hop artist Chris Brown, in the white logo WFP hoodie, garnered nearly half a million likes on Instagram. But Brown comes with a criminal history. In 2009, he pleaded guilty to felony assault for attacking his then-partner, the pop star Rihanna.

NPR asked McDonough of WFP if she felt the image of Brown was problematic for the organization. She declined to comment.

Balenciaga did not respond to multiple requests for comment on Brown’s social media appearance in the WFP sweatshirt.

The associations with controversial public figures could hurt the World Food Programme’s image, says Brad J. Bushman, a professor of communication and psychology at the Ohio State University. He is the coauthor of a 2014 study that looks at whether sex and violence affect buying intentions.

“You want your brand to be associated with positive things. When it’s not, people come to associate your brand with negative things,” he says.

There’s another concern raised by aid specialists. Some researchers take issue with the message that buying products can help the world. For Lisa Ann Richey, the Balenciaga partnership continues the “commodification of compassion,” which she wrote about in the 2011 book she co-authored, “Brand Aid: Shopping Well to Save The World.”

In the book, Richey critiqued (RED)’s corporate strategy in the 2000s. She argued that it promotes the idea that products are “good” just as long as they contribute to a good cause, which can distract consumers from a more critical question: Was the product produced ethically?

“Do not get sucked into the marketing that this choice makes you a hero,” Richey told AidEx, an organization that supports humanitarian workers, in an online interview in May.

“This goes to the core of the debate on what the whole development industry is about,” says Savina Tessitore, who’s worked at the Food and Agriculture Organization of the U.N. and gone on humanitarian missions to Ghana, Nigeria, Sudan and Thailand. “Whether it’s changing the structural conditions of poverty and vulnerability or giving crumbs that fall off the table to the poor and hungry.”

“Who can buy [$850] fanny packs?” Tessitore asks. “Very rich people who are such because so many more are very poor, some to the extent that they cannot survive without some form of foreign aid. It’s downright obscene.”

Others in the aid community share her perspective. “What is gained by co-opting your logo to clientele that, if able to afford a $800 hoodie, should frankly be doing a hell of a lot more [for charity]?” says Patrick McGrann, who has been employed by various aid organizations and U.N. agencies over a span of 15 years. He is currently working on a Ph.D. on humanitarian aid at the University of London. “[It’s] a pretty lame way to broaden partnerships.”

Despite the criticisms, there is some indication that people want to buy from companies that support philanthropic causes.

Shawn Grain Carter is a professor at the Fashion Institute of Technology and a luxury branding consultant at the FIT’s fashion business management department. She says that increasingly, consumers want the brands they love to engage in social justice causes. “They want brands to demonstrate that they have a triple bottom line for people, planet and profit.”

Indeed, a 2017 study from the public relations research group Cone Communications found that 87 percent of 1,000 survey participants said they would purchase a product “because that company advocated for an issue they cared about.”

At the moment, Balenciaga and World Food Programme in talks to continue “a more long-term commitment,” according to Vermeil — but nothing has been confirmed yet.