Demonstrators ransacked this Ebola transit center in Beni in the Democratic Republic of Congo, where the struggle to control the disease — and the protests it has sparked — will be part of the global health landscape in 2019. 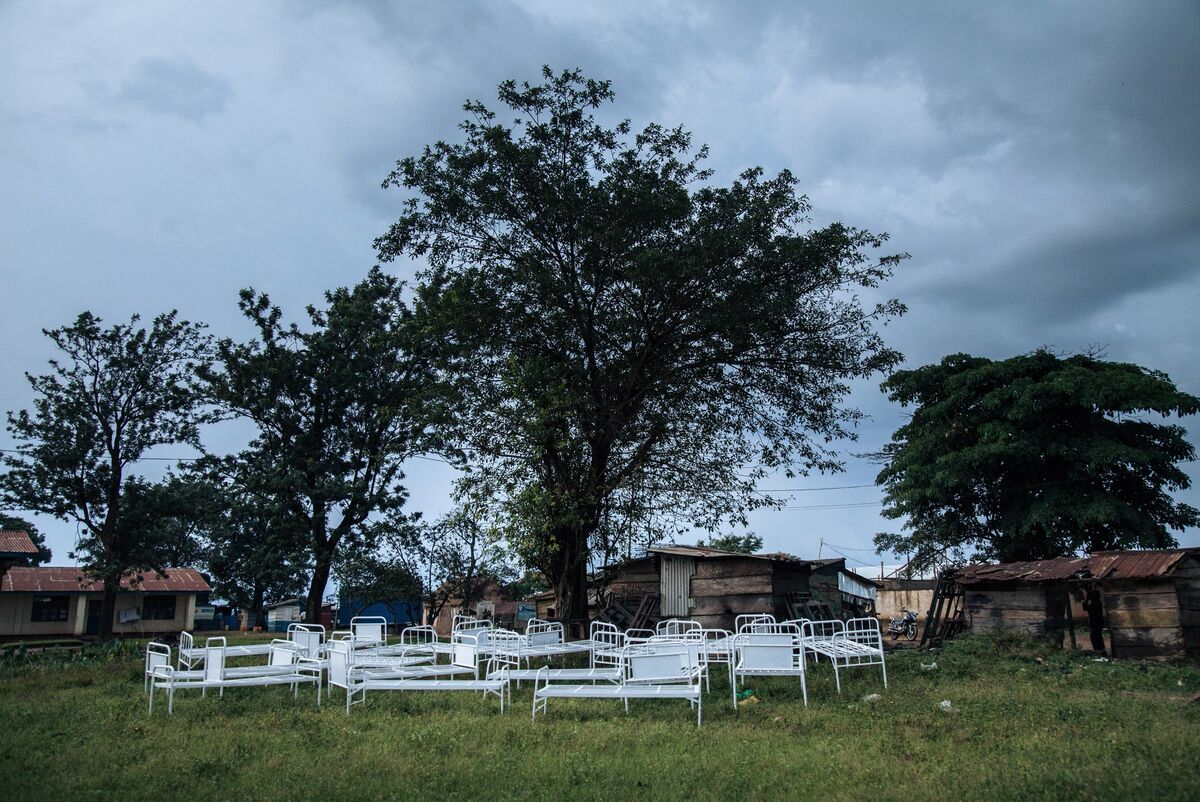 Demonstrators ransacked this Ebola transit center in Beni in the Democratic Republic of Congo, where the struggle to control the disease — and the protests it has sparked — will be part of the global health landscape in 2019.

At the beginning of 2018, we made predictions about what the year in global health and development might look like in the countries we cover.

The pundits we interviewed forecast that 2018 would bring a decline in the number of health workers around the world, inspire more humanitarians to share their #MeToo stories and see more conflict that would drive the world’s humanitarian crises.

Our predictors didn’t do too badly. The Lancet’s latest Global Burden of Disease study noted: “The global shortage and unequal distribution of health workers requires urgent attention.” In October, international charities gathered in London to try to tackle sexual harassment in the aid sector. And a 2018 report from UNOCHA found that “conflict remains the main driver of humanitarian needs.”

So what should we expect in 2019? We reached out to pundits in global health and development and they came up with nine bold predictions.

1. Positive social change will be contagious in Africa.

Over the past year, Ethiopia has gone through a historic transformation at breakneck speed, reports NPR correspondent Eyder Peralta. The country welcomed a new reformist prime minister, who forged peace with former enemy Eritrea and freed thousands of political prisoners.

Tobias Denskus, a professor of international development communications at Malmo University and the founder of Aidnography, a global health and development blog, thinks that could inspire other African countries. “Eritrea is one of the most isolated, autocratic and dictatorial nations,” he says. “I’m hoping that positive social change in neighboring countries like Ethiopia will lead Eritrea to do the same.” – Malaka Gharib

The majority of Africa’s population is young — and that so-called youth bulge will mean “more and more people will make the shift from rural to urban centers in search of jobs and opportunity and driven by changing climate,” says Kennedy Odede, co-founder and CEO of the nonprofit SHOFCO, which provides education, grassroots organizing and services like health care and water in the slums of Kenya.

The changing urban landscape will be a challenge for governments. They “will have to be responsive to rapid change or risk humanitarian crises and destabilization,” Odede says. If governments do not provide better services for this new urban population, Odede says there could be an “urban spring” — protests and chaos from angry, uneducated, marginalized youth. But he is an optimist: “There is opportunity in this to harness the energy and intellect of young people.” – Marc Silver

3. More countries will follow the U.S. example of pulling out of U.N. funding.

On January 1, the U.S. formally left UNESCO, the United Nations Education, Science and Cultural Organization. At the end of World War II, the United States helped found UNESCO to preserve the world’s heritage sites and promote the flow of ideas to prevent future conflicts. But then, UNESCO granted full membership to the Palestinians, and the U.S. stopped funding it, NPR reported.

This is not the first time that the U.S. has left the U.N. heritage agency. It withdrew once before, in 1984, citing corruption and an ideological tilt toward the Soviet Union against the West, according to Foreign Policy.

Tobias Denskus of Malmo University predicts that the U.S. will make further cuts: “I’m worried that as we move closer to U.S. elections, U.N. funding will suffer even more and ultimately weaken [the U.N.].” And he worries the U.S. precedent will cause other countries to reduce their contributions based on their political agenda. – Malaka Gharib

4. There will be more significant infectious disease outbreaks — maybe even a pandemic …

“We’re seeing a global increase in the spread of infectious diseases,” says Jennifer Nuzzo, a senior scholar at the Johns Hopkins Center for Health Security who leads the Outbreak Observatory, a group that collects information about outbreaks. And she doesn’t expect a change in that pattern.

“In fact,” she says, “there are worrying signs that the conditions favoring the emergence of a pandemic — and the impact it would have — are ever more present and possibly getting worse.”

5. … but the odds are good we can beat back a bad outbreak.

The ability to respond quickly to pandemics is also increasing, says Nuzzo. For example, the DRC was able to control the first phase of its Ebola outbreak in a couple of months, and there’s now an Ebola vaccine that didn’t exist four years ago when the virus swept West Africa.

Still, the second phase of the outbreak – which is now the second largest and second deadliest in history – shows that political instability can stand in the way of such advances.

“The case for optimism is that the emergence and spread of diseases may be inevitable, but the impacts that they have on society aren’t,” she says. “We should count on there being very significant outbreaks. Whether they become pandemics is up to us.” – Joanne Lu

6. People who need mental health help will find it on their phone.

The fields of mental health and substance abuse treatments are about to take a great leap forward into the digital world, predicts psychiatrist Vikram Patel, professor of global health and social medicine at Harvard University. The solution to fighting stigma and the lack of trained counselors could be right in your pocket – a smartphone or even a plain old flip phone.

Counselors with a web connection could learn about effective diagnosis and treatment online. They could ping their patients with online tips. People with depression or schizophrenia or substance abuse in rich and poor countries could use their phones to check in with a counselor, receive guidance or touch base with others facing the same issues.

Researchers around the world are also testing a variety of apps. The University of Washington is working on a variety of cellphone-based training and treatment programs in Ghana, where cellphones are common and there’s a broad 3G network. The FDA is working on ways to approve digital programs for cognitive behavioral therapy. And the National Institute of Mental Health in the U.S., which is also predicting greater use of digital technology in the future, already provides a guide for finding effective mental health apps. – Joanne Silberner

Bullying, sexual harassment and sex scandals in the humanitarian industry made headlines in 2018, from big aid agencies like UNAIDS to small nonprofits like More Than Me.

One solution to this, critics have said, is to hire more diverse and qualified candidates. “Many organizations are realizing that they should diversify to represent views that have been traditionally sidelined,” says Tobias Denskus of Malmo University. “The pressure is increasing to hire more female leaders and hire capable managers from the global south, from the LGBT community who haven’t been included before.”

“More qualified, diverse candidates from Africa and beyond are knocking at the door,” adds Denskus — now it’s up to the aid organizations to let them in. – Malaka Gharib

8. There will be fewer food crises.

Dry season has begun in sub-Saharan Africa — the period from roughly November through April or May when the rains stop. As climate change has affected weather patterns, droughts have become increasingly severe.

By February, “you see the faces of hungry people from Ethiopia to Kenya to South Sudan,” says Esther Ngumbi, a researcher at the University of Illinois and an Aspen Institute New Voices food security fellow.

But in 2019, she is hopeful that the impact of the dry season will not be as dramatic. The reason, she says, is that countries are doing a better job equipping their farmers with water storage systems and encouraging them to plant drought-resistant crops like millet and sorghum, both highly nutritional grains, and cowpeas (aka black-eyed peas), whose seeds are high in protein.

Famine and food insecurity will still be part of the 2019 landscape, especially in conflict-torn areas. But Ngumbi is predicts fewer hunger emergencies: “It’s already January, and we haven’t seen new calls for emergency relief.” – Marc Silver

Paul Spiegel, director of the Center for Humanitarian Health at Johns Hopkins Bloomberg School of Public Health, worries that there will be “an increase in denial for people seeking asylum in high-income countries.”

As a result of increasing anti-immigration and anti-refugee sentiment, some countries in Europe have begun to “pay off” lower-income countries to shoulder the burden of taking in refugees, he says. In 2016, for example, Germany struck a deal with Turkey to quell the flow of refugees from Syria. In exchange for $6.8 billion, Turkey created facilities to detain refugees in camps while their asylum claims in Germany were being processed. In 2017, Italy followed suit, establishing a similar deal with Libya.

Spiegel worries that programs like these will ramp up in 2019 in the U.S. and beyond. “In the U.S., we’re already having trouble with the Mexican border. What’s going to happen when Venezuelans start making their way over here?” he says. For U.S. government officials to stay in power, he predicts they too will take a tougher stance on immigration policy — adopting the idea that the U.S. must “be strong at the borders.” – Malaka Gharib

Got a big, bold prediction for global health and development in 2019? Reply to this Twitter thread with your thoughts, and we’ll share a few in Goats and Soda’s newsletter next week.