What A Midwife Wishes People Knew About Her Job

Selamawit Lake Fenta of Ethiopia was named one of five midwife champions this year by the International Confederation of Midwives. 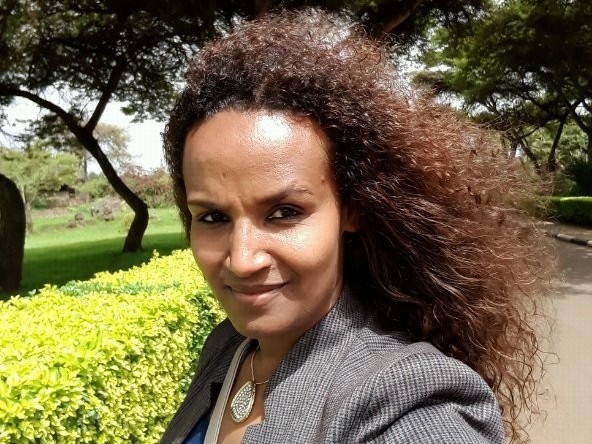 Selamawit Lake Fenta of Ethiopia was named one of five midwife champions this year by the International Confederation of Midwives.

Selamawit Lake Fenta, a midwife from Ethiopia, would like to change a lot of things about her profession — including its name in her country.

And she has made an impact in another crusade: fair pay.

This week, Fenta was one of five midwife champions selected by the International Confederation of Midwives for the International Day of the Midwife on May 5. The group picked the five from nominations submitted by members from 122 countries. The goal was to honor midwives who’ve made an impact in their community.

Sagal Ali, who organized the survey for the group, says she “was drawn to Selamawit’s story because she had shown results from lobbying for midwives’ rights.”

The other champions include Maryam Ama Buba, a midwife who fights female genital mutilation in Nigeria, and Lennie Adeline Kamwendo from Malawi, who started the country’s first association for midwives.

One reason for the survey was the lack of respect for midwives in many parts of the world, especially among their health-care peers, says Ali. According to a World Health Organization survey of 2,400 midwives in 2016, they face discrimination, harassment, low pay and poor working conditions despite their critical work of delivering babies and providing other types of care for women, like gynecological exams and family planning information.

Fenta, 30, works at the Tibebe Ghion Hospital in Bahir Dar City in Ethiopia and is the department head and a lecturer of midwifery at Bahir Dar University. She recorded responses to NPR via WhatsApp.

What inspired you to become a midwife?

I’m from a very remote area in the northern part of Ethiopia. I remember in my early childhood, there was a woman who was one of my uncle’s wives, who was facing labor. She was home alone, laboring for several hours. It was her sixth or seventh child. And after long hours of labor, she was having excessive bleeding vaginally because there was nobody to help her. She was found nearly dead.

[People tried to] help her by pouring cold water on her body. They thought that they could “awaken her from her sleep” because she was unconscious. Finally around midnight, she passed away. That was horrible.

My mother is 63. At age 41, she gave birth to her tenth child. All ten of us were born at home. The first and last child died. There was no midwife at that time. She had traditional birth attendants with her, but they did not have the training that midwives have. [In Ethiopia, midwives must complete a 3-year bachelor degree in midwifery].

In 2011, when you were just 22, you led a crusade for higher pay for midwives in your country. Data from a 2012 report found that a majority of midwives in Ethiopia made about $56 to $84 a month. By contrast, nurses make an estimated $140 a month.

We are not paid fairly.

One reason you cited in lobbying the Ministry of Health were occupational hazards, like possible exposure to infected blood. What other points did you make?

We are forced to cover many [geographical] areas. The midwife-to-patient ratio is small — in one case, a midwife was forced to work 36 continuous hours because [she was the only one available in her area].

And after four years, the Ministry of Health made it a requirement for employers to pay midwives more because of the job’s demands. Your reaction?

It’s a matter of fairness. Riskier jobs should have higher salaries.

There are 12,500 registered midwives in Ethiopia. What are some of the challenges they face?

There are lots of challenges for midwives in Ethiopia. Starting with the naming. The name of the professional — awalaj in Amharic — means “a professional only attending births.” I’m uncomfortable with that. The name doesn’t include antenatal care, postnatal care, newborn care and other competencies, like family planning and vaccinations that midwifery includes. It undermines the profession.

The professional association of midwives in Ethiopia is working to change the Amharic name — and people’s attitudes — of midwifery. [They are now using an Amharic transliteration of the English word for midwife]. We have even informed the press about the proper naming.

In addition, midwives in Ethiopia are often undermined and called incompetent by doctors and nurses.

Why are midwives important?

Midwives save double lives at a time. They have good passion. Caring for the mom is caring for the family. And they advocate for natural births.

How do you convince young Ethiopians to become midwives?

If you want innocent babies to be born healthy, then be a midwife. Serve the mother, serve the family. That’s how I say it usually for students.

What would surprise people about midwives in Ethiopia?

It’s men and women who are joining the midwifery profession, not just females. When I was in school, out of a total of 40 — there were only four male midwives. Nowadays, the ratio is almost one to one. That shows good improvement.