Writers Guild of America West President David Goodman speaks in Los Angeles at the 2019 union award ceremony. The WGA instructed is writers to fire their agents on Friday. 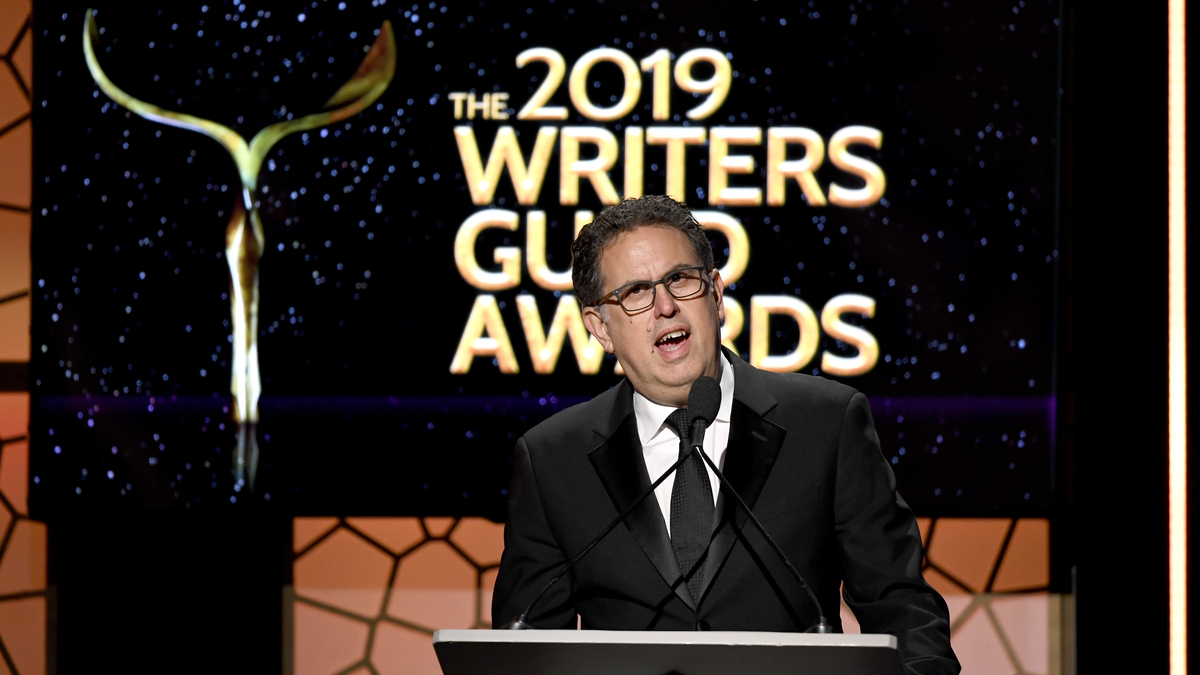 Writers Guild of America West President David Goodman speaks in Los Angeles at the 2019 union award ceremony. The WGA instructed is writers to fire their agents on Friday.

Thousands of Hollywood writers have been told by the Writers Guild of America to fire their agents — a drastic move that could impinge the production of new TV shows and films.

The abrupt directive on Friday followed a breakdown in negotiations over proposed changes to the agreement that has guided the basic business relationship between writers and agents for the past 43 years.

With talks stalled ahead of a midnight deadline, the WGA sent its 13,000 writers an email with instructions to notify their agents in writing that they cannot represent them until signing a new code of conduct.

“We know that, together, we are about to enter uncharted waters,” the message stated. “Life that deviates from the current system might be various degrees of disorienting. But it has become clear that a big change is necessary.”

It was a bold move for a group accustomed to writing its own scripts. “I guess the idea of taking on our agents is something people never thought we would do,” said David Goodman, the president of the Writers Guild of America West, in an interview with NPR.

“Studios and networks still need writers to do the work so until agents figure out that they need us more than we need them, we will carry this out,” said Goodman.

At the center of the conflict is a complaint among writers that their agents are not just drastically out-earning them, but preventing them from receiving better pay. The dispute threatens to hinder production at a time when the major broadcast networks are typically staffing up for their fall lineups. It could also lead to job losses in the industry.

“This whole fight is really about the fact that in a period of unprecedented profits and growth of our business … writers themselves are actually earning less,” said Goodman.

A main point of contention involves what are known as packaging fees, the money that agents get from a studio when they provide a roster of talent for a film or TV project. Traditionally, agents would earn a 10 percent commission for the work their clients receive from a studio. But with packaging fees, they are compensated by the studios directly. “They are not incentivized to increase the income of those writers,” Goodman said.

Writers are also protesting a shift in the business model in recent years at some of Hollywood’s largest talent agencies. Agents have increasingly entered the film and TV businesses as producers, and writers contend that such a dual-hat arrangement represents a conflict of interest.

Goodman said that in order to break the impasse, the industry needs to return “to the traditional agent-writer relationship” where an agent takes 10 percent of a writer’s income.

On Saturday, some writers posted images of the letters they had signed and sent to their agents, showing solidarity if not total support.

“I have an amazing agency that represents me,” screenwriter, actor and comedian Patton Oswalt said on Twitter. “But I have an even better guild which stands for me.”

“Dammit,” wrote David Simon, a Baltimore-based author and television writer best known for The Wire. “Just realized that the [agency agreement] midnight deadline is PST. So I have to stay up another three hours and one minute to send a pic of my naked a** to [the Creative Artists Agency].”

The Association of Talent Agents, which represents the agencies, has promised more transparency when agencies are involved in the production of a film or TV show. The association committed to reopening talks on the issue after two years if the Writers Guild determines that members aren’t benefiting.

The association also offered concessions leading up to Friday’s breakdown, including a chance to share 80 percent of “a percentage” of their profits when packaging fees for a television series are involved.

The guild said that based on the offer they received from agents, that “percentage” amounted to 0.8 percent of the money agents make from packaging fees.

ATA also said agencies would spend $6 million over six years to foster a more inclusive environment and insisted they “are, and always have been, on the side of the writer.”

In a statement, Karen Stuart, the executive director of the ATA, said Friday’s failure “was driven by the Guild’s predetermined course for chaos.” She said it would ultimately harm artists.

“The WGA is mandating a ‘Code of Conduct’ that will hurt all artists, delivering an especially painful blow to mid-level and emerging writers, while dictating how agencies of all sizes should function.”

Goodman said writers are already hurt. He called the proposal “a ridiculous offer given the fact that the writers are the reason that any television show succeeds.”

Until the impasse is solved, members of the guild have told writers they could turn to managers or lawyers to handle their business affairs.

Lawyers for the ATA threatened to sue the guild, contending that the union was violating California and New York licensing laws. As part of its argument, it said in a letter that the union “cannot ‘delegate’ authority it does not have.”

Friday’s breakdown in negotiations marked just the latest chapter in the Writers Guild’s longstanding aversion to packaging fees. Goodman said the union sought reforms as far back as the 1970s.

“People are saying this is an unprecedented move, but it isn’t in the sense that 43 years ago we tried to get rid of packaging and we failed and now it’s gotten much worse,” Goodman said.