A woman in Johannesburg, South Africa, uses an HIV kit that tests for antibodies in oral fluids. 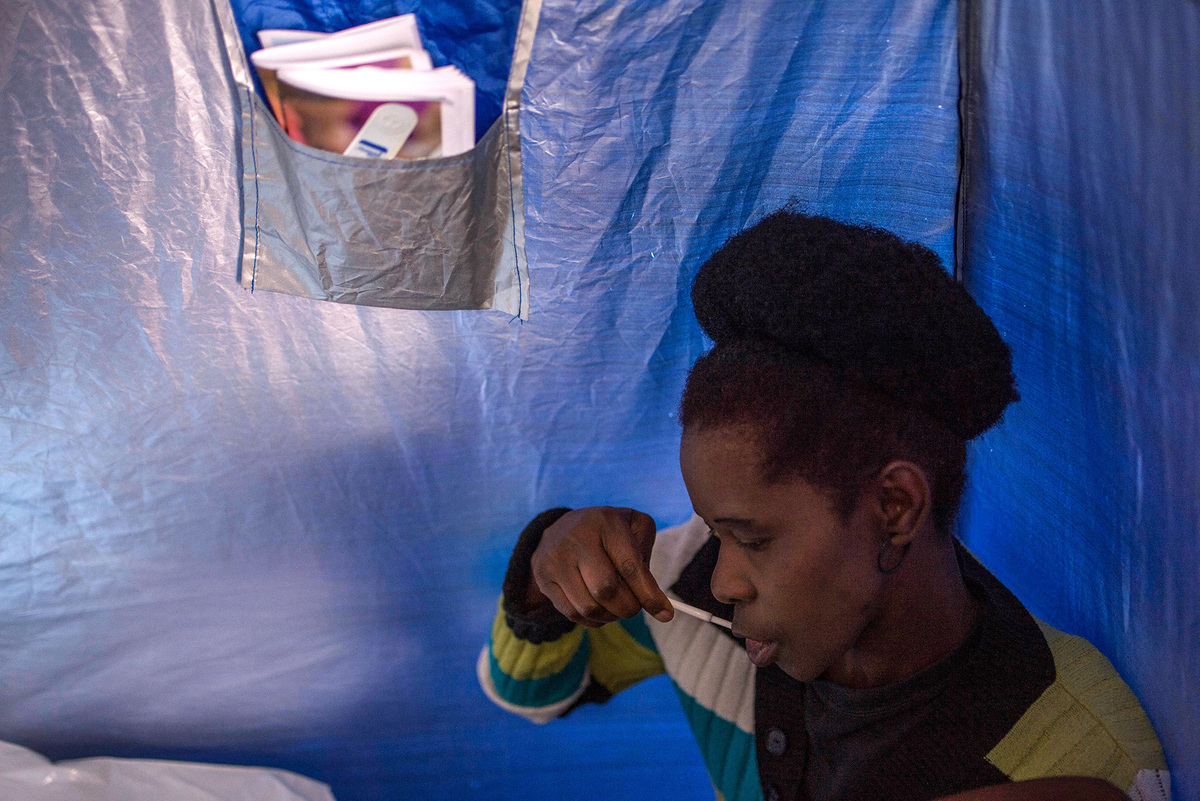 A woman in Johannesburg, South Africa, uses an HIV kit that tests for antibodies in oral fluids.

About 9.4 million people are likely HIV-positive and don’t know it. That’s a key finding from a new report from UNAIDS — and it’s why the theme of this month’s World AIDS Day is “Know your HIV status.”

That’s an important message, HIV/AIDS specialists say, at a time when the disease no longer makes headlines.

“Some people are under the erroneous impression that the epidemic is done,” says Wafaa El-Sadr, global director of the public-health organization ICAP and a professor at Columbia University. But HIV/AIDS remains an enormous problem around the world, she says: “Two million new infections in the past year; still about a million deaths every year.”

Knowing your status, she says, is “the foundation” for preventing new infections.

But simply knowing your status is not enough to stop the HIV/AIDS epidemic, El-Sadr and other global-health specialists say.

“My big issue with just knowing your status as a theme is that it puts all the burden on the individual,” says Chris Beyrer, the Desmond M. Tutu Professor of Public Health at Johns Hopkins University, a past president of the International AIDS Society and a doctor whose research has focused on epidemiology and human rights. While individual responsibility is important, it won’t stop the epidemic on its own, he says.

And the systems are not universally in place to stop new transmissions and improve the health of those who are HIV-positive, Beyrer says.

Coming Up With The 9 Million Estimate

About 37 million people around the world live with HIV, UNAIDS estimates in its new report. About one-quarter of those people, though, don’t know it.

You may wonder how it’s possible to calculate a number of people who have HIV but have not been tested to confirm their status.

UNAIDS estimates this number by collecting data on the rate of infection in a country and then applying it to a country’s total population. The theory is that people in remote areas might not have access to testing and that others avoid testing because of the stigma.

Researchers then make an educated guess for populations that haven’t been tested in each country.

“Estimation methods have been refined over time” by different researchers, Beyrer says, and such estimates are now “well-accepted.”

The State Of Testing

People aren’t being tested for the reasons you’d expect: fear of facing stigma and discrimination if a person learns they are HIV-positive. Then there are more practical concerns: from living far from where testing is offered to long wait times to be tested at health facilities.

Not to mention that some people are nervous about blood draws, part of the standard HIV testing procedure. But there is an alternative to the blood test that’s becoming more common: a test using oral fluids (including saliva).

(He does note that if the test is self-administered the results are slightly less accurate than tests in a lab with “more sophisticated machinery” — and that the oral fluid tests raise some concerns because “there are not as many antibodies in oral fluid as there are in blood.” For example, someone taking preventive PrEP medication is not a good candidate for an oral fluid test to monitor HIV status.)

When a test does come back positive, the subject may have many fears that are rooted in misinformation, says El-Sadr. People worry, she says, that they’ll never be able to have sex again or have children or find a spouse.

Yet as Beyrer puts it: “We’re in a new era, really, where the antiviral therapy, the AIDS treatments, are so good and so powerful that people living with the virus can live essentially normal lives and also not be infectious for partners” or to their children.

The upside of being tested, of course, is that someone who is HIV-positive can take medications to keep AIDS at bay. But that doesn’t always happen.

The Next Step After A Test

“Knowing your status if you don’t have access to drugs is not terribly helpful,” says Beyrer.

“We have a significant problem,” he says — both in the United States and around the world. “We have huge gaps — huge rips in the social safety net for the unstably housed, for the mentally ill, for people with substance use.”

“Knowing your status in that kind of setting?” he asks. “Necessary but insufficient.”

Whether they know their status or not, about half of people living with HIV — more than 19 million people — still do not have the virus under control, the UNAIDS study found. They estimated that number by looking at health data as well as how many HIV drugs are distributed.

Treatment and prevention through medicine are two of the major ways to halt the epidemic, Beyrer explains. Those who test negative for HIV but are at risk of contracting the virus because, for instance, of their sexual activity or drug use, can take PrEP, a pill that lowers the chances of infection.

Many of the same challenges to getting tested exist around prevention and treatment. There may not be a nearby clinic with an ample supply of affordable medication in many places, and stigma and discrimination are still widespread.

Take, for example, the story of Bisi Alimi. The first person in Nigeria to come out as gay on national television, he tested positive for HIV in 2004. But it would be another five years before he had access to life-saving antiviral treatments. It was much easier for heterosexual couples to access HIV care in Nigeria, he says — in large part because of laws against being gay and other forms of discrimination.

After his positive diagnosis, he met with a sexual health counselor. But otherwise, gay men in Nigeria had little support or resources to stay healthy, he says — including access to medical care for HIV.

“I lived five years waiting to die,” he says. By the time he was tested again in 2009 to see how much the virus had progressed, he met the technical definition for advanced AIDS.

But this time, he was living in the U.K. and was immediately linked to health care services and support networks.

“Treatment was the key,” says Alimi, who is now the executive director of the Bisi Alimi Foundation and an Aspen Institute fellow. He began taking antiviral medication and also found support within the HIV-positive community.

“And that was what changed everything for me,” he says. “It wasn’t just the test. It was what happened after the test.”

Melody Schreiber (@m_scribe on Twitter) is a freelance journalist in Washington, D.C.