Trump, Leading Democrats Fault Each Other As Partial Shutdown Heads Into 2019

The U.S. Capitol in Washington, D.C., is shown Monday during a partial shutdown of the federal government. 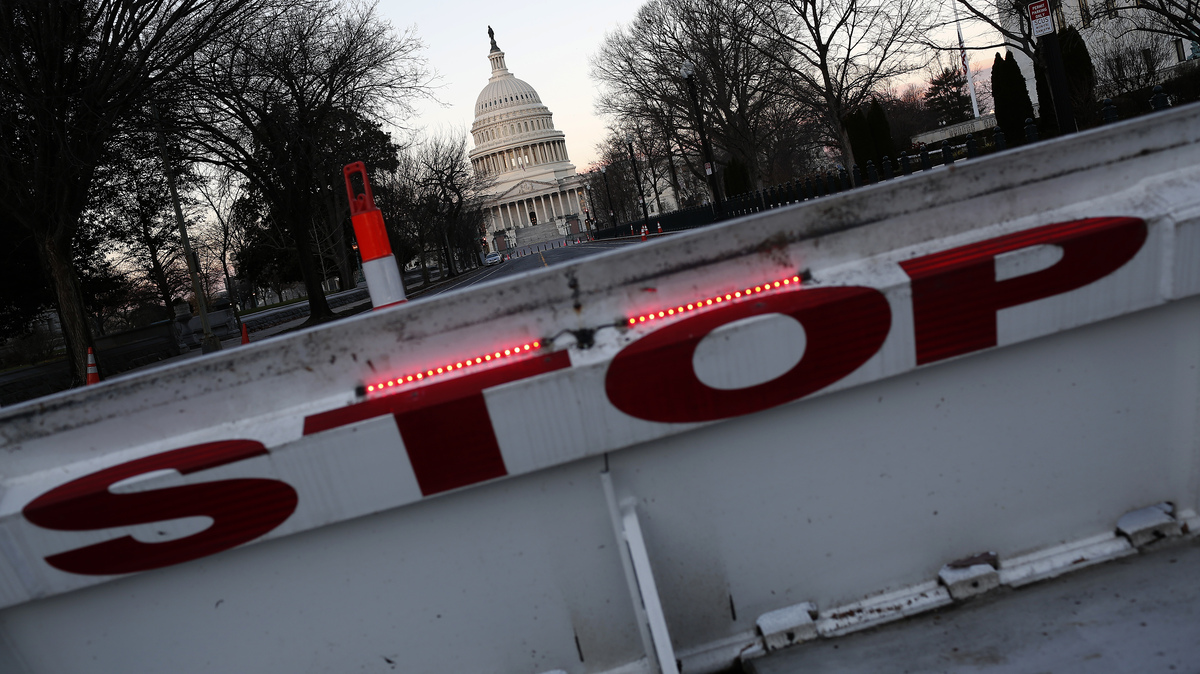 The U.S. Capitol in Washington, D.C., is shown Monday during a partial shutdown of the federal government.

Six days into a partial government shutdown, congressional Democrats and President Trump are showing no signs of reaching a deal to reopen the government. Instead, it appears the shutdown could last until 2019.

The president has only a few more days to advance any spending agreement with the help of full GOP control in Washington. Democrats take control of the House on Jan. 3, giving them significant new leverage over future spending talks.

But on Thursday afternoon, Rep. Steve Scalise, R-La., the House majority whip, advised members that no votes were expected in the House this week. Scalise also told lawmakers that while the House awaits Senate action on a spending bill, he will aim to provide members with 24 hours’ notice before any expected votes in the House.

The House and Senate briefly opened for business Thursday afternoon, but the momentary sessions were hardly a sign of behind-the-scenes negotiation. The halls of Congress have been nearly empty in recent days, save for a skeleton crew of staff and lawmakers. Democrats say they are all waiting for Trump to abandon his demand for $5 billion to build a wall on the border with Mexico.

Trump is showing no signs of backing down. Instead, he is taking to Twitter to blame Democrats for the shutdown.

The Democrats OBSTRUCTION of the desperately needed Wall, where they almost all recently agreed it should be built, is exceeded only by their OBSTRUCTION of 350 great people wanting expecting to come into Government after being delayed for more than two years, a U.S. record!

Trump has refused to sign any spending bill that does not include money for the border wall. Senate leaders have repeatedly said that money for the wall cannot be approved in the Senate, where Democrats have sufficient votes to block the legislation.

“Different people from the same White House are saying different things about what the president would accept or not accept to end his Trump Shutdown, making it impossible to know where they stand at any given moment,” Schumer and Pelosi said in a statement released on Christmas Eve. “The president wanted the shutdown, but he seems not to know how to get himself out of it.”

Trump insists Democrats are to blame, despite an earlier statement that he would personally take credit for a shutdown if one were to occur. He went on to claim without evidence that most of the workers who are being harmed by loss of wages in the shutdown vote for Democrats.

Have the Democrats finally realized that we desperately need Border Security and a Wall on the Southern Border. Need to stop Drugs, Human Trafficking,Gang Members Criminals from coming into our Country. Do the Dems realize that most of the people not getting paid are Democrats?