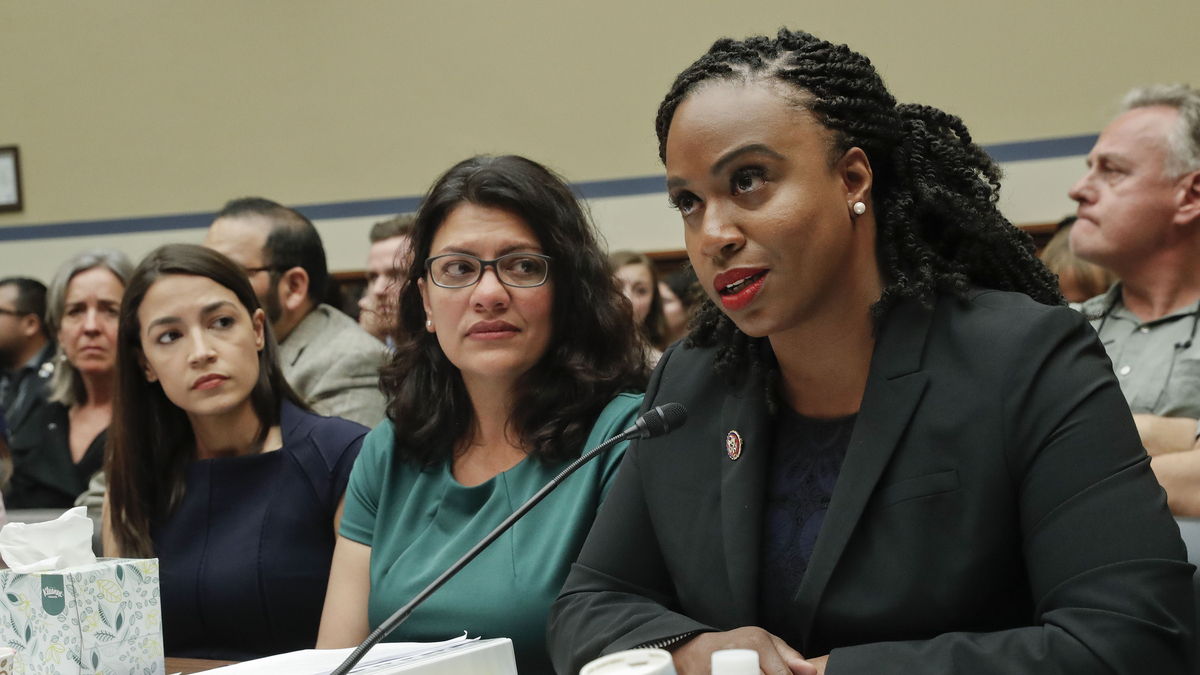 President Trump, a day after using racist language in a tweet directed at four minority members of Congress, dug in further Monday, saying they should apologize “to our Country, the people of Israel and even to the Office of the President.”

When will the Radical Left Congresswomen apologize to our Country, the people of Israel and even to the Office of the President, for the foul language they have used, and the terrible things they have said. So many people are angry at them their horrible disgusting actions!

Trump said “the Radical Left Congresswomen,” should apologize for “the foul language they have used and the terrible things they have said. So many people are angry at them their horrible disgusting actions!”

On Sunday, Trump said the Congresswomen, Reps. Alexandria Ocasio-Cortez, D-N.Y., Ilhan Omar, D-Minn., Rashida Tlaib D-Mich., and Ayanna S. Pressley, D-Mass., should “go back” to their countries of origin (Rep. Omar was born in Somalia, the other three were all born in the United States).

So interesting to see “Progressive” Democrat Congresswomen, who originally came from countries whose governments are a complete and total catastrophe, the worst, most corrupt and inept anywhere in the world (if they even have a functioning government at all), now loudly……

….it is done. These places need your help badly, you can’t leave fast enough. I’m sure that Nancy Pelosi would be very happy to quickly work out free travel arrangements!

It’s important to note that the President’s words yday, telling four American Congresswomen of color “go back to your own country,” is hallmark language of white supremacists.

Trump feels comfortable leading the GOP into outright racism, and that should concern all Americans.

In brief comments to reporters Monday at the White House, Trump denied his tweets were racist. “Not at all,” he said.

House Speaker Nancy Pelosi, who has been at odds with the four members of her caucus, came to their defense Sunday. She tweeted that when Trump “tells four American Congresswomen to go back to their countries, he reaffirms his plan to ‘make America Great Again’ has always been about making America white again.” Pelosi added “Our diversity is our strength and our unity is our power.”

Pelosi also said the House will take up a resolution “condemning the President’s xenophobic tweets,” which she said will be sponsored by Democratic lawmakers who were born overseas.

Republicans stayed mostly quiet about Trump’s tweets on Sunday but several weighed in on Monday, critical of Trump’s language.

In an interview on Fox Friends Monday morning, Sen. Lindsey Graham, R-S.C. said Trump should “Aim higher. They are American citizens. They won an election. Take on their policies.” But Graham added that “We all know that AOC and this crowd are a bunch of communists,” and that “They hate Israel, they hate our own country.”

Rep. Paul Mitchell, R-Mich tweeted at Trump “we must be better than comments like these. I share the political frustrations with some members of the other party, but these comments are beneath leaders.”

Another Michigan GOP lawmaker, Rep. Fred Upton tweeted that he was “appalled by the President’s tweets,” adding “there’s no excuse.” Upton also condemned what he labeled “inflammatory rhetoric from both sides of the aisle that is used to divide us.”

…that we ought to be working on together – immigration, the debt ceiling, the border crisis. The President’s tweets were flat out wrong and uncalled for, and I would encourage my colleagues from both parties to stop talking so much and start governing more.

Sen. Pat Toomey, R-Pa., also issued a statement condemning the tweets. “President Trump was wrong to suggest that four left-wing congresswomen should go back to where they came from. Three of the four were born in America and the citizenship of all four is as valid as mine. I couldn’t disagree more with these congresswomen’s views on immigration, socialism, national security, and virtually every policy issue. But they are entitled to their opinions, however misguided they may be. We should defeat their ideas on the merits, not on the basis of their ancestry.”

Trump, who in a separate tweet Sunday claimed 94% support by Republican party members, seemed to welcome the storm he set off, saying in another tweet that it was “sad” to see Democrats “sticking up for people who speak so badly of our Country and who, in addition, hate Israel with a true and unbridled passion.”