Trade And Economic Tensions Loom Over G-7 Summit In France

U.S. President Trump has lunch with French President Emmanuel Macron in Biarritz, France. Leaders of some of the world’s major economies have arrived in the country for the Group of Seven summit. 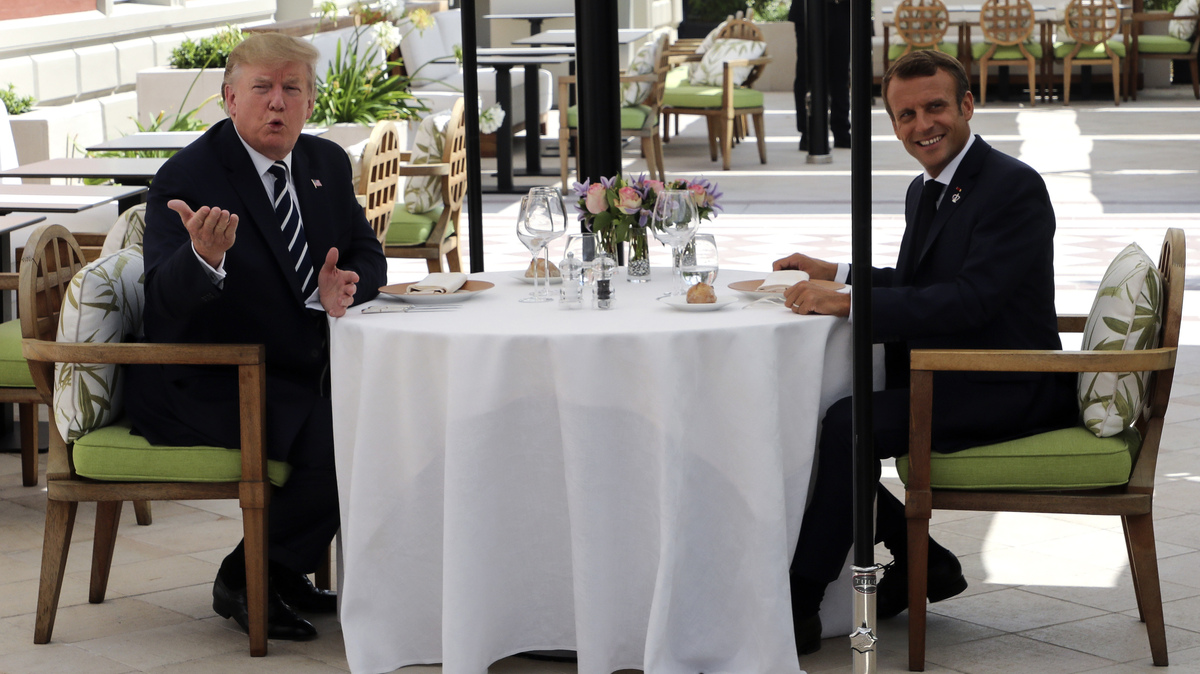 U.S. President Trump has lunch with French President Emmanuel Macron in Biarritz, France. Leaders of some of the world’s major economies have arrived in the country for the Group of Seven summit.

President Trump arrived in France for the annual Group of Seven summit, with the flagging global economy and ongoing trade war with China framing his visit, and the meeting potentially further exposing deep rifts between the U.S. and other countries over trade and climate change.

Just before leaving Washington, D.C., on Friday, Trump increased tariffs on Chinese imports and threatened to force all American companies to leave China. Upon arriving in Biarritz early Saturday, Trump said via Twitter that he had the authority to do so.

For all of the Fake News Reporters that don’t have a clue as to what the law is relative to Presidential powers, China, etc., try looking at the Emergency Economic Powers Act of 1977. Case closed!

Trump has previously threatened to invoke the same act to impose tariffs on Mexican goods.

The increasing trade tensions with China loom over Trump’s visit to France, where he will meet with leaders of the world’s major economies. The G-7 comprises the United States, Germany, France, Japan, Italy, Canada and the United Kingdom.

On Friday, before leaving for France, Trump also threatened to impose levies on French wine. The threat was in response to a French proposal to tax U.S. technology companies.

Speaking to reporters at the White House, Trump said, “Frankly I don’t want France going out and taxing our companies … And if they do that … we’ll be taxing their wine like they’ve never seen before.”

On Saturday, Trump had lunch with French President Emmanuel Macron who said the two would discuss “a lot of crisis.” Top of the agenda would be the “economic global situation,” Macron said, and how to “decrease tensions and fix the situation in terms of trade.”

Macron said that the two also would talk about Libya, Syria, Ukraine, North Korea and Iran and that climate change would be another “hot topic” on the table.

Trump said he anticipated the lunch would go well. “We actually have a lot in common, Emmanuel and I. We’ve been friends for a long time. And every once in a while, we go at it just a little bit — not very much. But we get along very well,” Trump said.

After the lunch Trump tweeted, misspelling Macron’s name and including a link to a parody Twitter account for Macron, “Just had lunch with French President
@EmanuelMacrone. Many good things are happening for both of our countries. Big weekend with other world leaders!”

Upon arriving in France, Trump said the Group of Seven would accomplish a lot this weekend, but what he calls the U.S. “spat” with China may dominate his meetings. Global markets tumbled Friday after Trump’s tweets about new tariffs on Chinese goods.

On Saturday night, Trump will attend a dinner for leaders at a lighthouse overlooking Biarritz. Formal talks are set to begin Sunday morning.