The Midwest Battles Historic Floods In The Aftermath Of ‘Bomb Cyclone’

Tom Wilke, his son Chad, and Nick Kenny launch a boat into the swollen waters of the Elkhorn River to check on Witke’s flooded property, in Norfolk, Neb., on Friday, March 15. 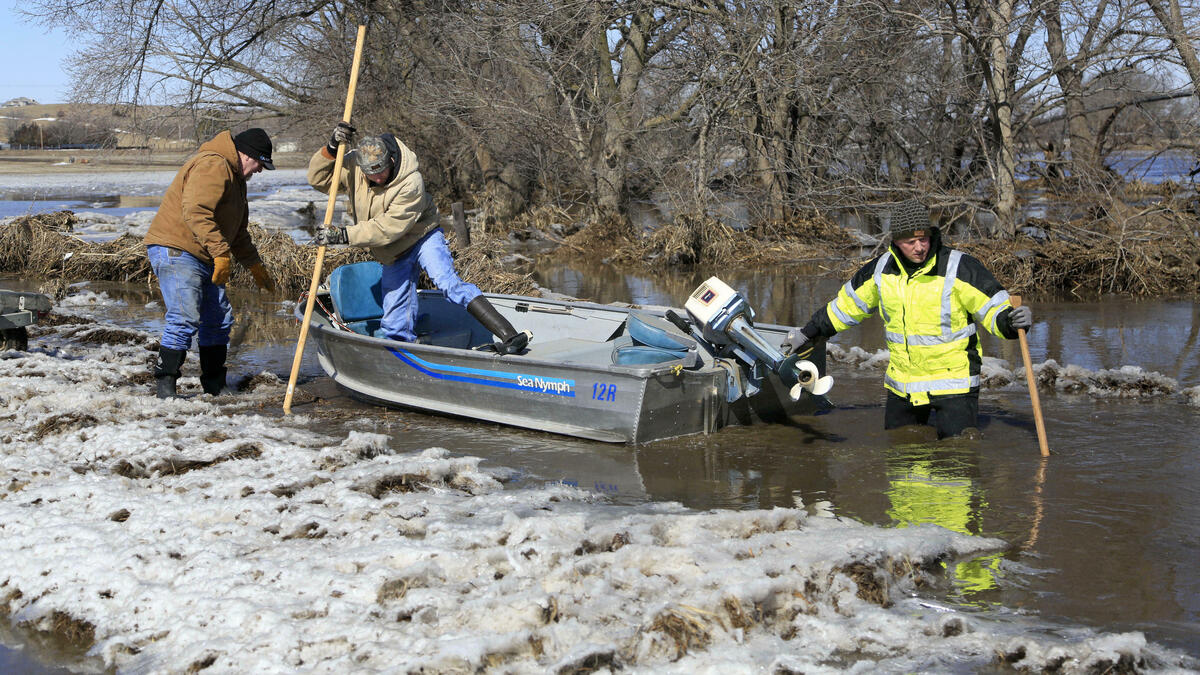 Tom Wilke, his son Chad, and Nick Kenny launch a boat into the swollen waters of the Elkhorn River to check on Witke’s flooded property, in Norfolk, Neb., on Friday, March 15.

It’s the worst flooding parts of the Midwest have seen in decades, where several states are battling the aftermath of a powerful “bomb cyclone” which swept through the region last week, bringing blizzard conditions, hurricane-like winds, snow and heavy rain.

The powerful storm pushed some waterways, including the Missouri River, to record levels in South Dakota, Iowa and Minnesota.

Marc Chenard, a meteorologist with the National Weather Service, told NPR many areas will remain water-logged for days.

“All the rivers respond differently, have different time scales that they flood and then recede. A lot of the rivers are going to remain in flood into the weekend, and some into next week,” Chenard said. “Eventually as we head into next week, we should see more and more of the rivers start to recede below flood stage.”

Iowa, Wisconsin and Nebraska have all declared states of emergencies.

As rivers spill over their banks and through local communities, the rising waters are setting records.

In Nebraska, Gov. Pete Ricketts said nearly every part of the state is experiencing historic flooding.

Nebraska has deployed helicopters to assist in rescuing those trapped by the high waters, and boats for travel across washed out roads. CNN reported that some people who were rescued suffered from hypothermia, and had to be transported to the hospital.

The Omaha-Valley Weather Service office said a levee was breached in Nebraska’s Dodge County. “This is an extremely dangerous and life-threatening situation,” the weather service warned. “Do not attempt to travel unless you are fleeing an area subject to flooding or under an evacuation order.”

With flood waters rising, officials were monitoring for damage at the Cooper Nuclear Station, south of Omaha, which serves about half a million customers. Mark Becker, spokesperson for the Nebraska Public Power District told NPR the plant will continue operating for the foreseeable future. “If we get to the next threshold, the plant would go to a shutdown,” Becker said.

“A week ago, my backyard had a foot of snow in it. It’s warmed up. The ground is frozen still. The snow is melting, and we’ve had some torrential rains, and that’s created torrential flooding,” Becker told NPR.

In Wisconsin, Governor Tony Evers said flooding was impacting “homes, businesses, and cities and towns” across the state.

Lori Getter of the Wisconsin Emergency Management spoke with NPR. “We’re trying to get a handle on the situation with the flooding across the state, but two days ago, and even yesterday, we were evacuating people because of the rising waters,” Getter said.

A bomb cyclone occurs when there is a rapid drop in atmospheric pressure. The massive storm moved into Canada on Friday.