Tensions Continue High Over Kashmir, With 500 Arrests And A Communications Blackout

Indian security forces check the identity of a motorist in Srinagar, Indian-controlled Kashmir, on Thursday. 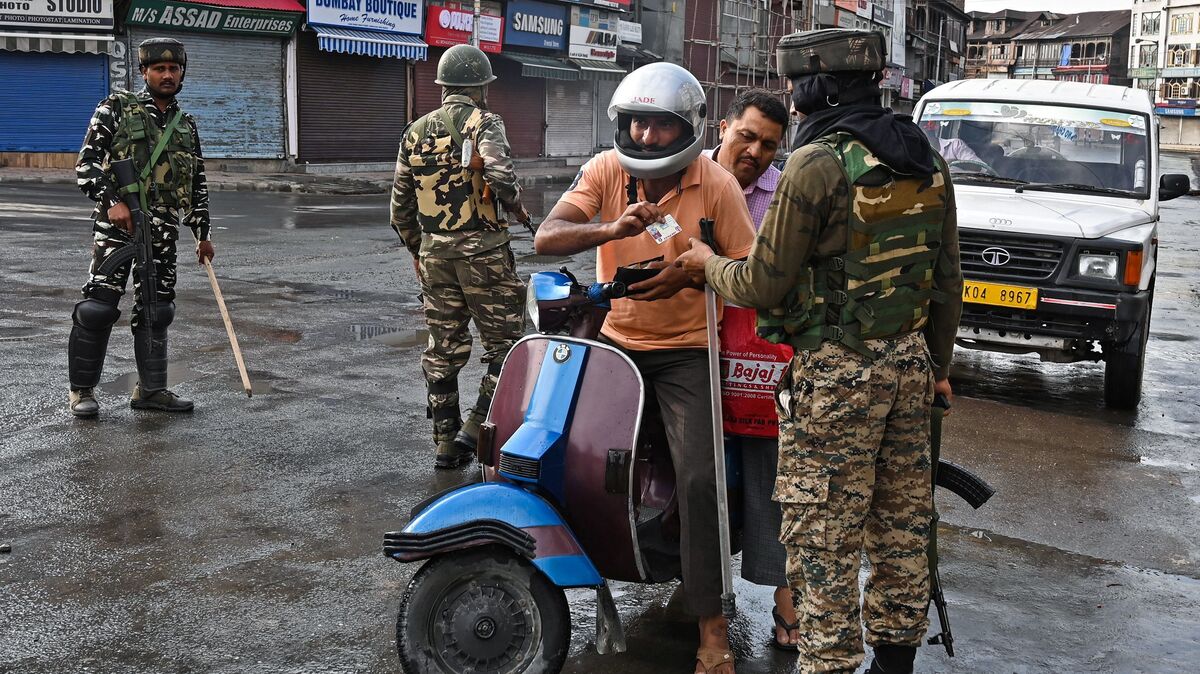 Indian security forces check the identity of a motorist in Srinagar, Indian-controlled Kashmir, on Thursday.

As tensions continued high between India and Pakistan over the disputed region of Kashmir, Indian Prime Minister Narendra Modi said Thursday his government’s decision to revoke Kashmir’s special status marked “a new era” that would free the region of “terrorism and separatism.”

An Indian paramilitary soldier orders a man to lift his robe before frisking him in Srinagar, Indian-controlled Kashmir, on Thursday. 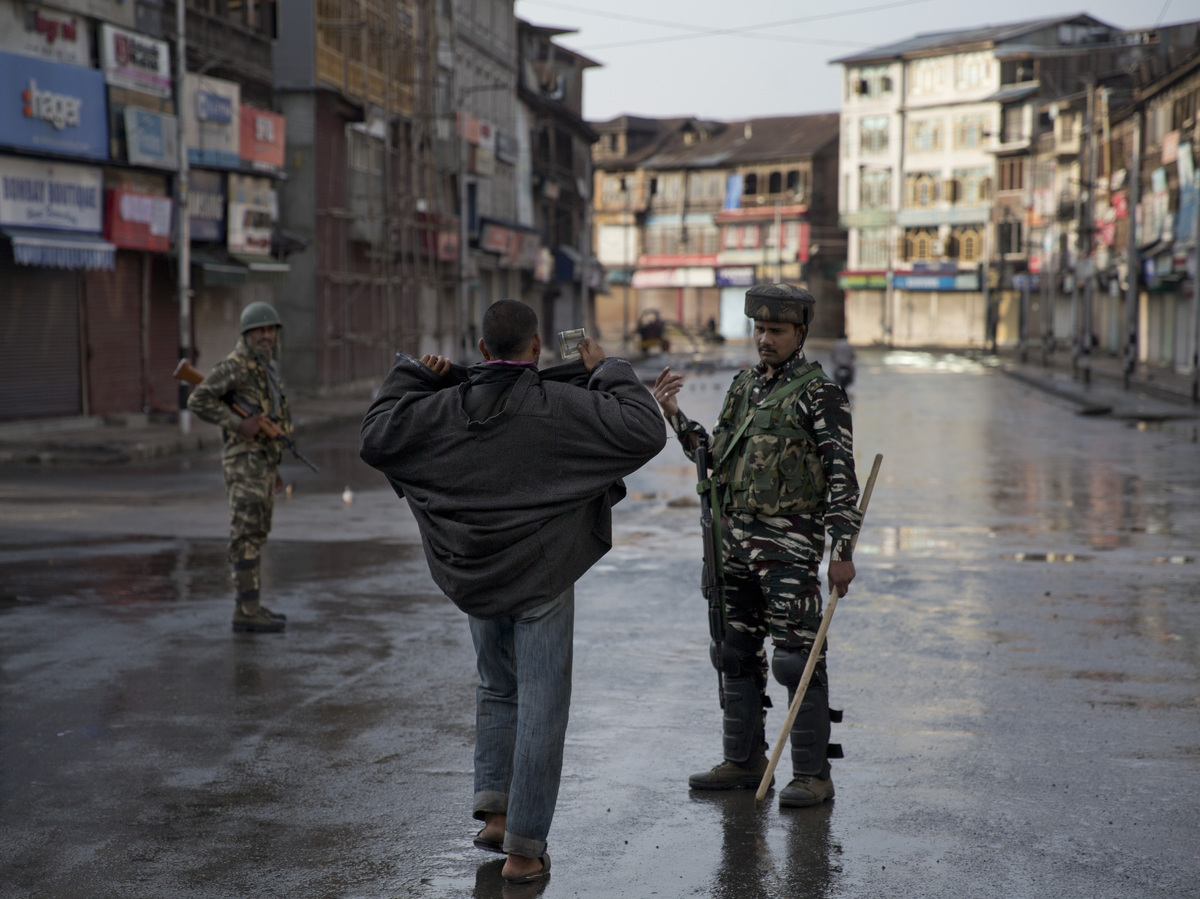 An Indian paramilitary soldier orders a man to lift his robe before frisking him in Srinagar, Indian-controlled Kashmir, on Thursday.

“I fully believe that the people of Jammu and Kashmir will move forward with fresh hopes, dreams and motivations,” Modi said, using the full name of the Indian state, which is being converted into a union territory to be ruled directly from New Delhi.

His address to the nation on Thursday was Modi’s first public statement since the government revoked Kashmir’s constitutionally guaranteed special status on Monday, sparking outcry and unrest over the divided Himalayan territory, which both India and Pakistan claim in its entirety. It came amid news of hundreds of arrests in the Muslim-majority region, which is now in its fourth day of a communications blackout.

The constitutional change, revoking Article 370 of India’s constitution, strips Kashmiris of exclusive rights to buy property and hold certain government positions, allowing outsiders to influence laws and own a part of the contested land. Indian-administered Kashmir can no longer fly its own flag, and residents fear the measures could upend their customs and culture.

In his speech, Modi blamed Article 370 for what he described as widespread corruption and nepotism in Kashmir. He said it prevented application of other Indian laws, including ones that protected minorities and established minimum wages.

“Surprisingly, no one could tell you what the benefit of Article 370 was to the people of Jammu and Kashmir,” Modi said.

His Hindu nationalist government has deployed tens of thousands of troops and authorities arrested more than 500 people, including local politicians. Schools and shops have closed. 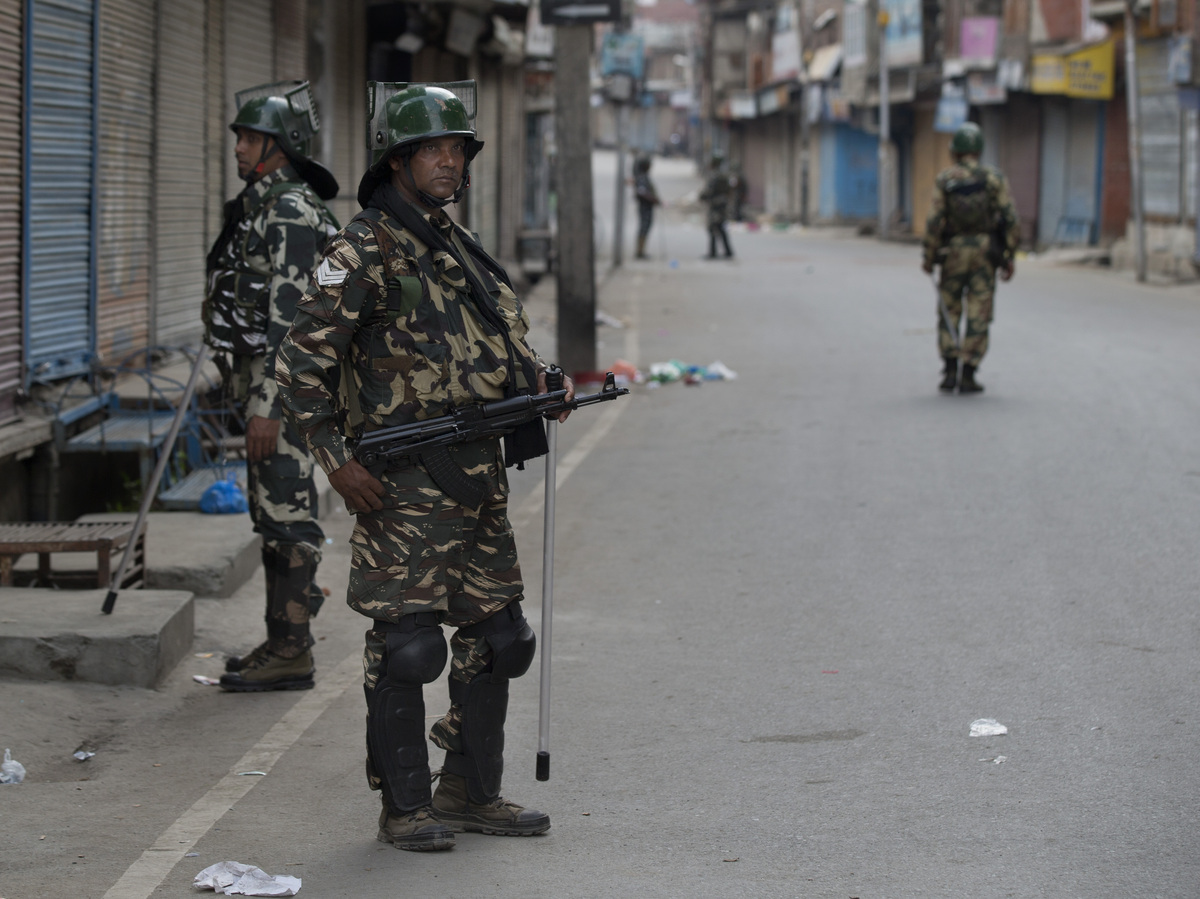 To try and prevent unrest, the government also stopped the flow of information in Kashmir, shutting down the Internet, cutting off phones and cable TV. Local news websites are frozen in time since late Sunday or Monday morning — right before the Indian government locked everything down. No permission has been granted this week for international reporters to visit the region.

The government has shut off Kashmiris’ Internet 53 times already this year, according to a tally by the Software Freedom Law Center, an Internet rights group in New Delhi. But stopping access to phones, cable television and Internet all together is unprecedented, says the group’s director, Sundar Krishnan. He says this isn’t just about surfing the web. It’s about allowing society to function.

“Nowadays, everybody is using Internet for anything and everything,” he says. “Normal life comes to a halt. It’s like a basic fundamental right.”

In his address, Modi called this shutdown an “inconvenience” that was done “as a precaution.”

“I assure the people of Kashmir that slowly, conditions will return to normal,” Modi said.

In a subsequent tweet, he promised to deliver “developmental opportunities … denied for decades! This includes access to better education, laws to protect the marginalised sections of society, a life of greater dignity for women.”

In his speech, Modi also reminisced about how Kashmir used to be a setting for many Bollywood films. He predicted those days would return. “I am confident that in the future, even international films will be shot there,” he said.

Products manufactured in Kashmir, such as shawls, also need to be promoted all over the world, he said.

India’s Ministry of External Affairs urged Pakistan to reconsider its decision to downgrade diplomatic ties and suspend trade, accusing its neighbor of presenting an “alarmist vision of the region.”

A United Nations spokesperson expressed the U.N.’s deep concern that India’s actions would “exacerbate the human rights situation.” Residents have crowded hospitals, the only places where they can access WiFi. And at airports, people have sought out strangers to carry letters to loved ones.

Kashmir’s fate may lie in the Indian courts, where the change in status is likely to be challenged. For now, an opposition activist has filed a petition in India’s Supreme Court to challenge the information blackout.

Tensions between India and Pakistan escalated earlier this year, after a suicide attack in February killed at least 40 Indian security forces in Indian-controlled Kashmir. India struck a Pakistani village in retaliation, heightening fears about the nuclear-armed neighbors’ relations. A Pakistan-based militant group claimed responsibility for the attack, for which Pakistan denied any responsibility.

Tens of thousands of people have died in the conflict over Kashmir, which started after India and Pakistan gained independence from British rule in 1947.

Malala Yousafzai, the Pakistani Nobel Peace laureate, said in a tweet that she hoped tensions could be resolved peacefully. “There is no need for us to continue to suffer and hurt each other,” Yousafzai said. “Today I am worried about the safety of the Kashmiri children and women, the most vulnerable to violence and the most likely to suffer loses in conflict.”