Demonstrators hold signs and chant in Richmond, Va., on Feb. 2, 2019. They were calling for the resignation of Gov. Ralph Northam after a racist photo on his medical school yearbook page came to light. He denies that he is in the photo but admits to once dressing in blackface. 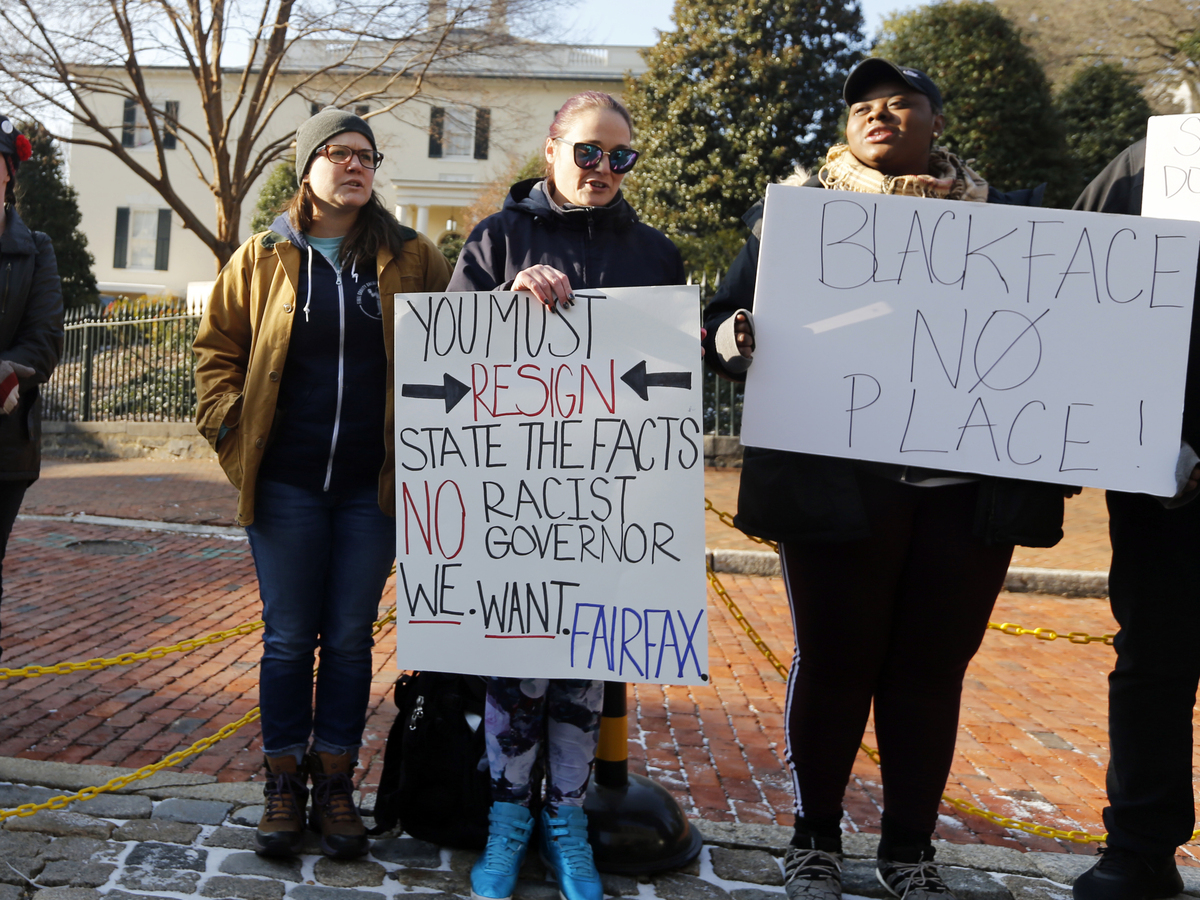 Demonstrators hold signs and chant in Richmond, Va., on Feb. 2, 2019. They were calling for the resignation of Gov. Ralph Northam after a racist photo on his medical school yearbook page came to light. He denies that he is in the photo but admits to once dressing in blackface.

Virginia Gov. Ralph Northam is embroiled in controversy for admitting that he wore blackface at a party in the 1980s and for a racist photo on his medical school yearbook page. But the governor, a pediatric neurologist by training, told CBS he isn’t resigning, because “Virginia needs someone that can heal. There’s no better person to do that than a doctor.”

NPR spoke with another doctor, Damon Tweedy, about what message it sends to black patients to hear a prominent doctor tell the country that he has worn blackface. Tweedy is the author of Black Man in a White Coat: A Doctor’s Reflections on Race and Medicine and is an associate professor of psychiatry at Duke University.

The debate in Virginia is only one episode in a long history of racism in medicine, Tweedy says. Many African-Americans may feel distrustful of physicians, stemming in part from the legacy of the infamous Tuskegee syphilis experiment. This distrust has repercussions for the health of black people in America today, who may be less likely to stick with treatments or participate in medical research.

Tweedy says he hopes the debate will generate more open conversations about the way bias works its way into the health care system.

This extended interview has been edited for clarity and length.

What’s your response to the photo with the guy in blackface and the other guy in Klansman robes in a medical school yearbook?

The first thought I had was what that might mean for the patients. One of the problems is that if we just sort of make it all about Governor Northam, that in some ways kind of misses the point. Someone had to take that photo; someone had to put that into a yearbook. And you think about it, that medical school was in a community that at the time, even now, was 40 percent African-American.

What does that mean for those patients, that there’s this tacit acceptance of these attitudes about race? And further, 1984 is not that long ago. People are still in practice who trained in 1984. Many of them are the generation that supervised me as I was coming in training.

Lay out for me briefly, what is the history of tension between the American medical community and African-Americans?

It dates back to the beginnings of our country, in some ways. The most famous example in modern times is the Tuskegee syphilis experiment, which basically was run by the U.S. Public Health Service and investigated the natural history of syphilis in African-American men. Even after treatment was available, the researchers never notified the men that they had syphilis or that there was treatment available. It was the most egregious example that we know of.

But in some ways it follows a much larger history of concerns, not just in the research realm but in the clinical realm. It’s very much an oral history among African-American people. You often find that people have a concern or mistrust that they are being experimented upon or that the medical establishment in some way doesn’t have their best interest at heart.

When you were in medical school back in the ’90s, was race ever addressed in the curriculum or in practical training in your residency?

During that time there was just starting to be those conversations. Maybe an hour, out of a four-year curriculum, an hour or two. Think about that. I think that a lot of times people think that if you’re a doctor, you’re very intelligent, you’re sophisticated, and somehow you’re not as susceptible to these issues of bias and racism in a way that other people might be. I think that’s shortsighted.

I’m a professor myself, and I’ve used this recent event as a sort of a teaching opportunity. You know, had discussions with students where we’ve sort of really openly talked about what do these issues mean.

I wonder if you have any advice for Governor Northam, one doctor to another?

I’m not sure how much he might listen to me, but I’m less interested in the idea of him resigning or not. Regardless of what happens there, he does need to find a way to use his story, not out of self-interest but in terms of moving forward the conversation in other medical schools and medical settings. How might someone who thinks that they’ve been well meaning and educated and all that sort of thing, how might they still have made mistakes that could have potentially harmed people?

What are the most glaring racial health disparities you see today in your teaching or in your practice?

I’m in psychiatry, personally, but it really transcends every medical specialty. There’s been a body of research that shows that these disparities come across in every way because really they derive from society … from social inequality, economic inequality. That so much drives the kind of care people can receive, where they can receive it, if they can receive it at all. It really cuts across every specialty. Doctors need to learn that they’re part of this larger social world.

Mara Gordon is a family physician in Washington, D.C., and a health and media fellow at NPR and Georgetown University School of Medicine.