Pope Francis delivers his Christmas Day blessing from the main balcony of St. Peter’s Basilica at the Vatican on Tuesday. 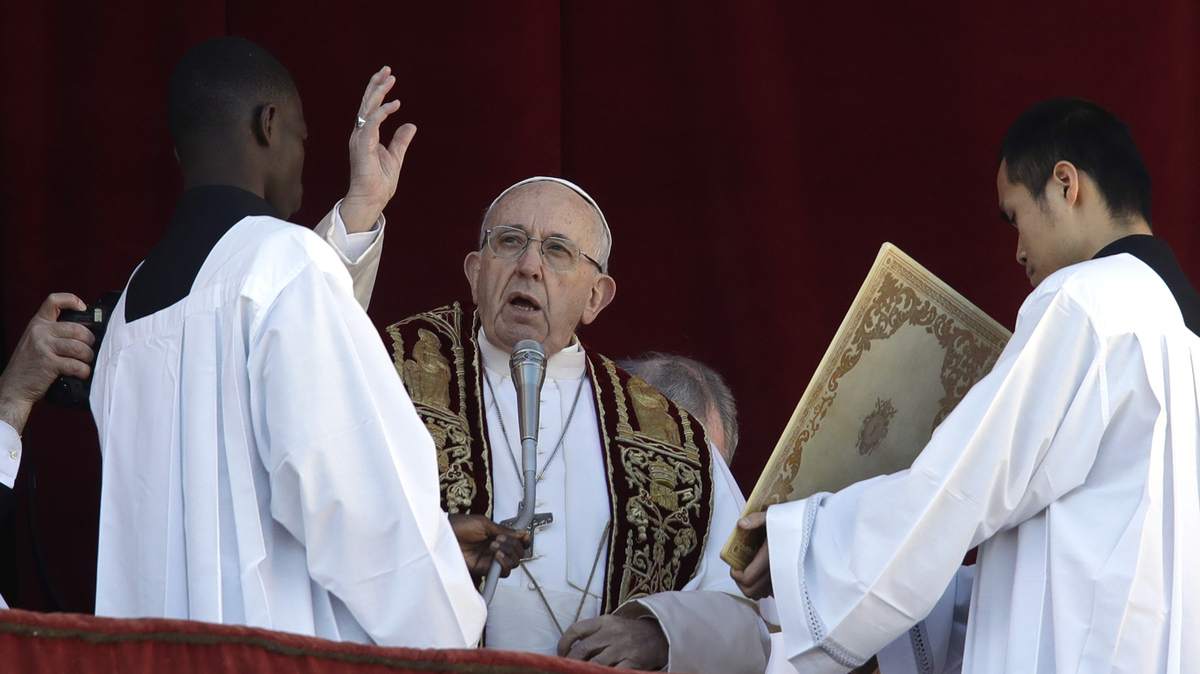 Pope Francis delivers his Christmas Day blessing from the main balcony of St. Peter’s Basilica at the Vatican on Tuesday.

Delivering his Christmas Day address to tens of thousands of people on gathered in St. Peter’s Square in Vatican City, Pope Francis appealed for fraternity and peace, especially in violent conflicts around the world.

The pope emerged on the balcony of the nearly 400-year-old St. Peter’s Basilica to cheers and trumpets.

“We are all brothers,” he said. “Our differences, then, are not a detriment or a danger; they are a source of richness.”

It was a message of compassion and unity, delivered at a time of rising nationalism and anti-immigrant sentiment across Europe.

In his “Urbi et Orbi” (“To the City and to the World”) address, Francis urged the embrace of fraternity in the Israeli-Palestinian conflict, the wars in Syria and Yemen, the “clash of arms” in Africa and the conflicts in Korea and Ukraine.

The first Latin American pope in the history of the Roman Catholic Church also offered prayers for two Central and South American countries, Venezuela and Nicaragua.

He called on the international community to find a political solution in Syria, where hundreds of thousands of people have died during seven years of civil war — “so that the Syrian people, especially all those who were forced to leave their own lands and seek refuge elsewhere, can return to live in peace in their own country,” he said.

He also spoke about Yemen, urging the international community again to “finally bring relief to all the children, and the peoples, exhausted from war and famine.”

Speaking to “dear” Nicaragua, where the United Nations has reported repression, torture and abuse of protesters by the government, Pope Francis prayed for “reconciliation” and unification toward the “construction of the future of the country.”

He also sent a message of hope for minority Christian communities living in “hostile environments.”

The address came as a moment of respite for a pope whose standing has fallen in recent years, in part because of his response to a widespread sex abuse crisis in the church. Three years ago, 7 out of 10 Americans had a favorable view of the pope. That number has dropped to just half of the U.S. public, according to a Pew Research Center study.

Francis has acknowledged and apologized for “serious mistakes” in his handling of a sex abuse scandal within the Catholic Church in Chile. In 2015, he appointed Bishop Juan Barros to the diocese of Osorno, Chile, despite allegations that Barros had helped cover up abuse.

But even as his charismatic image suffers, Argentine-born Jorge Maria Bergoglio continues to be a forceful advocate on behalf of migrants and refugees across the world.

In five years of papacy, he has spoken candidly about “the globalization of indifference, the economy of exclusion and the throwaway culture,” as NPR’s Sylvia Poggioli puts it. He has traveled to Bangladesh, where he met with Rohingya refugees, and the Greek island of Lesbos, from which he brought 12 Muslim refugees back to Rome.

Over the summer, he joined in calls for the U.S. to end its policy of family separations at the U.S.-Mexico border, tweeting that “We encounter Jesus in those who are poor, rejected, or refugees.”

From the balcony of the basilica on Tuesday, the pope echoed those words. He urged tourists, locals and pilgrims to remember that God chose to manifest himself not in an angel, but in a human, born in a specific place and time.

That shows us, he said, “salvation passes through love.”