Authorities remove evidence markers at the scene of a mass shooting, Sunday in Dayton, Ohio. Multiple people in Ohio have been killed in the second mass shooting in the U.S. in less than 24 hours, and the suspected shooter is also dead, police said. 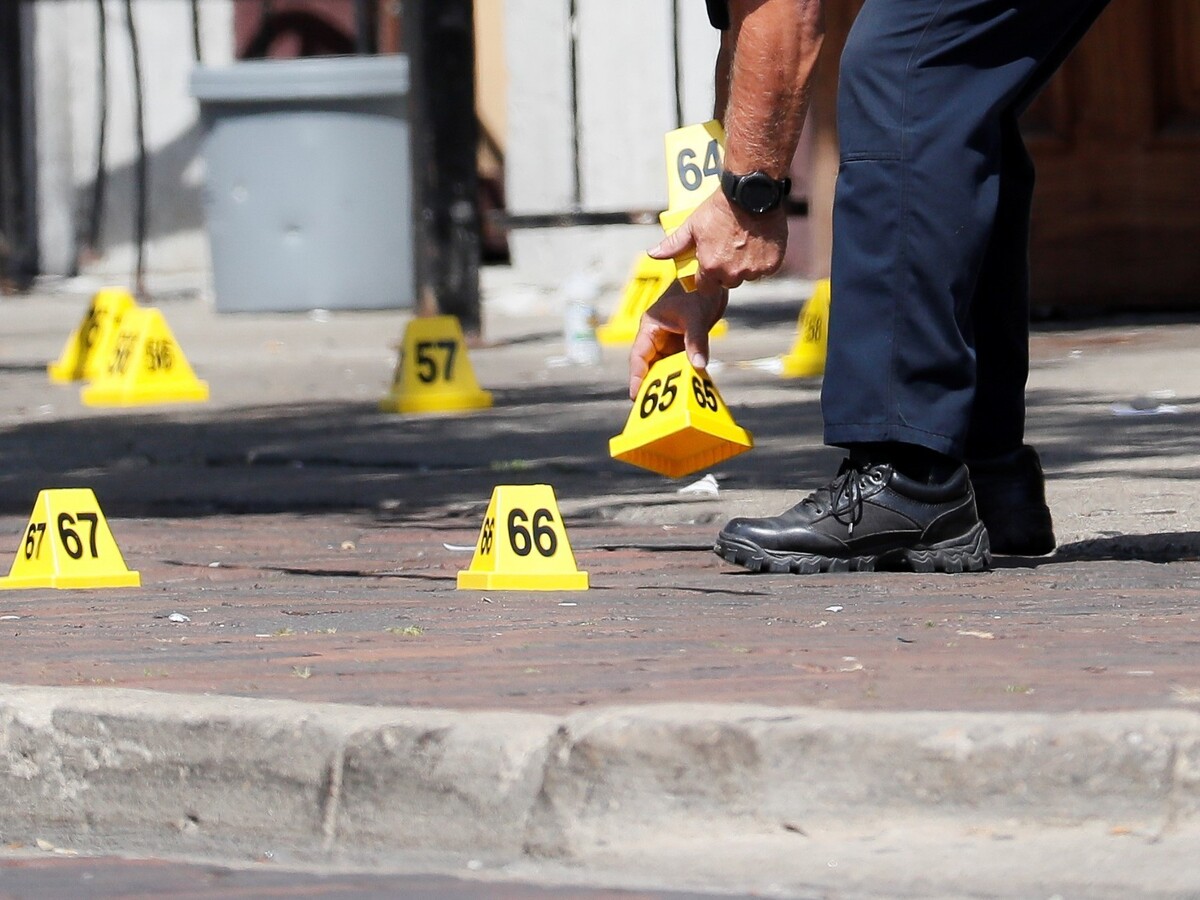 Authorities remove evidence markers at the scene of a mass shooting, Sunday in Dayton, Ohio. Multiple people in Ohio have been killed in the second mass shooting in the U.S. in less than 24 hours, and the suspected shooter is also dead, police said.

Police have identified 24-year-old white male Connor Betts from Bellbrook, Ohio, as the shooter who claimed nine lives and injured 27 others in Dayton on Sunday morning.

Among the nine dead was the shooter’s sister, Megan Betts, 22, Lt. Col. Matt Carper said at a press conference Sunday.

Carper denied suggestions that the victims were targeted.

“Due to the very short timeline of violence, it’s hard to imagine that there was much discrimination in the shooting,” he said. “It happened in a very short amount of time.”

Carper offered no other details about the shooter, however, a LinkedIn profile belonging to someone of the same name and who also lives in Bellbrook says he attends Sinclair Community College and works at Chipotle Mexican Grill in Centerville, Ohio.

The massacre followed an even bloodier attack in El Paso, Texas, on Saturday in which a lone gunman killed 20 people and injured 26 at a busy Walmart.

On Sunday, police in Dayton said the shooter there opened fire on pedestrians as he walked down a busy street at about 1 a.m. Police killed the suspect less than a minute after the shooting began.

Hours later, Dayton police and FBI officials had begun a search of the suspect’s home. Bellbrook Police Chief Doug Doherty said the FBI cleared the house and removed vehicles from the residence.

He said three to four people live in the home, which he described as “a family home.” Becoming emotional at times, Doherty added that authorities are trying to give the suspect’s family respect and peace.

“As a mayor, this is a day that we all dread happening,” Dayton Mayor Nan Whaley told reporters Sunday morning.

“It is a terrible day for Dayton, but I am so grateful for Dayton police’s fast action,” she said, adding that hundreds of people could have been killed based on the size of crowds in the area on a Saturday night.

Twenty-seven people are in multiple hospitals across the city, some with life-threatening injuries, she said.

Police were already on patrol in the area full of nightclubs, known as the Oregon District, and stopped the shooter in less than one minute, the mayor said.

Details about the condition of some of the victims emerged at a news conference Sunday morning. Dr. Greg Semon of Miami Valley Hospital said at least one person is in critical condition and four others are being treated by trauma specialists and other specialists.

He added, “They are obviously doing everything they can to maximize their outcomes.”

Sixteen of the victims received by the hospital were treated for gunshot wounds. Others arrived with wounds and injuries caused by “an effort to escape the shooter,” Semon said.

An official from Kettering Health Network said victims were taken to three of its hospitals. Four people are in serious condition.

Earlier on, Carper of the Dayton Police Department had said Dayton is “a very safe area.” “This is extremely unusual obviously for any community, let alone Dayton. And in our Oregon District, this is unheard of and very sad. It’s a very tragic evening,” he told reporters shortly after 4 a.m. Sunday.

Police say the shooting started at 1 a.m. outside. In what Carper called a “very short timeline of violence,” the shooter used what police called a “long gun.” Whaley later said the shooter wore body armor and used a .223-caliber weapon with a high-capacity magazine and had additional magazines.

Carper said police were investigating the possibility of more shooters being involved, but “it looks like” only one shooter was responsible.

“We understand that the public wants to know who this person is. We are working very hard to give the public an answer as to what the motivation might have been for this attack,” he said.

No police officers were injured.

The Dayton police have trained for years for active-shooting situations, Carper said. Twenty-one medic units responded to the scene, and the FBI is on the scene to assist in the investigation.

This is a developing story. Some things that get reported by the media will later turn out to be wrong. We will focus on reports from police officials and other authorities, credible news outlets and reporters who are at the scene. We will update as the situation develops.