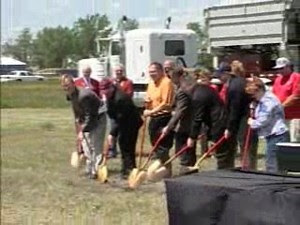 North Dakota Oil Activity Continues to Surge – North Dakota’s oil boom continues to expand with 84 drilling rigs operating, and oil production exceeding 166,000 barrels per day and growing fast. The state’s producing well count has grown to 4,026, up from 3,880 at the beginning of the year.

Oil Tax Collection Nearly $400 Million in Fiscal Year 2008 – In fiscal year 2008, the oil industry paid $397.4 million to the state of North Dakota in the form of production and extraction taxes. Gross production tax accounted for $209.4 million of this amount, while oil extraction tax accounted for the remaining $188 million. In fiscal year 2007, North Dakota collected $251.7 million, surpassing the $68.4 million collected in 2003.

Kringstad Named ND Pipeline Authority Director – The North Dakota Industrial Commission (NDIC) named Justin J. Kringstad as director of the North Dakota Pipeline Authority on August 1. A Bismarck native, Kringstad graduated from the University of North Dakota in 2007 with a degree in geological engineering. He has previously worked for the Department of Mineral Resources and the Energy and Environmental Research Center. Kringstad will meet with agencies and companies to identify areas where the Pipeline Authority can help further develop infrastructure. He will also develop a web site that provides current information on pipeline activities throughout the state and will update white papers that have been presented during the past year.

September Annual Meeting – We are expecting a big crowd for the Annual Meeting September 16–18 in Bismarck. The room block at the Radisson Inn is full. We have another room block at the Ramkota Inn that will be held until September 12. Call 701-258-7700 and ask for the Petroleum Council block of rooms. Registrations are coming in fast as well and the golf tournament is filling quickly. Register now to ensure your spot. We thank all of the sponsors who make this event possible. We look forward to seeing you at the Annual Meeting in Bismarck. For registration, sponsorship, agenda, and other information, see http://www.ndoil.org/content/view/104/103/.

Extra Meeting Regarding Oil Development on Tribal Lands Planned for September 18 – In response to questions from members, the Petroleum Council is hosting a special informational meeting regarding oil and gas development on the Three Affiliated Tribes Indian Reservation following the Annual Meeting on September 18 from 2:00–4:30 p.m. at the Radisson Inn. Speakers will include tribal, state, and federal government officials who will provide information relating to oil activities on the reservation. The meeting agenda will be available soon at http://www.ndoil.org/content/view/104/103/.

Workforce Strategies – The Petroleum Council, and several member companies, are participating in an Empower Committee Workforce Recruitment Task Force to develop specific recommendations on how the state can improve efforts to help train, recruit, promote, and place workers in North Dakota’s energy industry.

North Dakota Workforce Recruitment Event to be Held in Denver – The North Dakota Department of Commerce encourages businesses with immediate job openings to participate in the upcoming Experience North Dakota event in Denver on November 15 at the Renaissance Denver. Businesses that participate have an interactive and informational exhibit/booth at the event. Businesses will also have the opportunity to meet with potential employees, conduct on-site interviews and will receive an electronic list of attendees. In addition, businesses registering by October 1 will be featured in pre-event materials reaching more than 15,000 people and will be recognized at the event and in the event program materials. Experience North Dakota is a combination job fair and open house to recruit workers back to North Dakota. The event will feature job, housing, and education opportunities within the state, as well as arts, entertainment and food with North Dakota roots. For more information and to register for the event, go to www.ndcommerce.com/experiencend.

Pipeline Initiative Failed – An initiative petition effort to regulate the placement of oil pipelines did not make the required deadline for submission of signatures in order to qualify for the November ballot. Already approved for the ballot is a proposed constitutional amendment that would establish a new trust fund for oil tax revenues, which was approved for the ballot by the Legislature in 2007. The Secretary of State is currently verifying a petition that would reduce North Dakota’s individual and corporate income tax rates. On a related pipeline note, the Dakota Resource Council, Dakota Rural Action, and the Natural Resources Defense Council have filed a lawsuit against the U.S. State Department over the Keystone oil pipeline project in eastern North Dakota. The lawsuit accuses the State Department of not fully investigating the risks from the pipeline and its effects on rural communities.

Three Affiliated Tribes Regulatory Agreement Signed – Governor John Hoeven and tribal officials signed the final oil and gas regulatory agreement on August 8. This historic Agreement provides for a streamlining of the Tribal and State tax systems into one system administered by the State. Earlier this summer, the oil and gas tax agreement was signed by the parties which provided for the establishment of a uniform taxation system for oil and gas production within the exterior boundaries of the Fort Berthold Indian Reservation.

Wilderness Initiative Proposed – A coalition of environmental groups is proposing that 62,300 acres of Dakota Prairie Grasslands in western North Dakota be protected as federal Wilderness. Oil and gas development would be prohibited in these areas. The North Dakota Wilderness Coalition includes the Badlands Conservation Alliance, the Sierra Club, and the Wilderness Society. The proposal would require congressional approval under the 1964 Wilderness Act and would leave the acreage open to cattle grazing by ranchers who have federal permits.

For more information on any of these issues or to be removed from the mailing list, contact the North Dakota Petroleum Council at (701) 223-6380, ndpc@ndoil.org, or see www.ndoil.org