NOAA Head: ‘No One’s Job Is Under Threat’ Over Trump’s Disputed Tweets About Alabama

Acting NOAA head Neil Jacobs, seen here at far right as President Trump watches a briefing on Hurricane Dorian, is defending his agency’s response to Trump’s claim that Dorian had been predicted to hit Alabama hard. 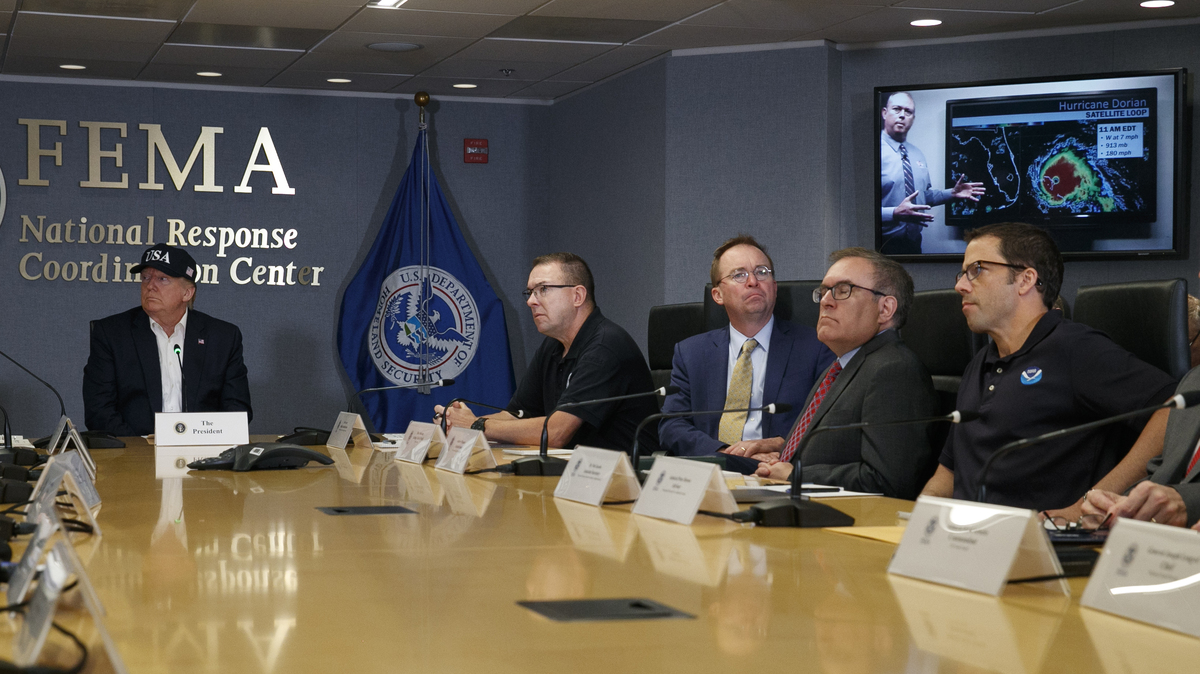 Acting NOAA head Neil Jacobs, seen here at far right as President Trump watches a briefing on Hurricane Dorian, is defending his agency’s response to Trump’s claim that Dorian had been predicted to hit Alabama hard.

Jacobs delivered a keynote speech Tuesday at the National Weather Association’s annual meeting in Huntsville, Ala. He defended a National Oceanic and Atmospheric Administration statement issued Friday that was widely seen as backing the president, but he also expressed support for the National Weather Service and its forecasters.

The unsigned statement from the NWS’s parent agency was meant “to clarify the technical aspects” of Dorian’s potential impact, Jacobs said.

“What it did not say, however, is that we understand and fully support the good intent of the Birmingham Weather Forecast Office,” he added, “which was to calm fears in support of public safety.”

Jacobs continued, “I am proud of the outstanding work performed by all of the weather forecast offices, including Birmingham, during the span of the storm.”

The speech’s tone was markedly different from that of NOAA’s statement, which appeared to criticize the Birmingham office by saying it had spoken “in absolute terms that were inconsistent with probabilities from the best forecast products available at the time.”

Among those listening to Jacobs’ remarks was Kevin Laws, science and operations officer for the NWS office in Birmingham. Afterward, when asked why he thought NOAA released that statement, Laws said:

“You know, I really have no idea. I mean, they didn’t talk to us about why they did it. … So it’s hard to say why they did. But I don’t think anybody here takes it personally.”

NOAA’s statement followed an uproar over the president’s extraordinary use of a modified NWS map in an Oval Office video — an official forecast for Dorian’s potential path toward the U.S. that included what looked to be a hand-drawn black bubble adding part of Alabama.

On Monday, the controversy flared again on news that NOAA’s acting chief scientist, Craig McLean, is investigating why the agency’s leadership endorsed Trump’s incorrect tweet about the danger for Alabama, despite the pushback from the Birmingham-based meteorologists.

That same day, The New York Times reported that NOAA took the action after Commerce Secretary Wilbur Ross allegedly threatened to fire top employees at the agency, which is part of the Commerce Department, if they didn’t back the president. A Commerce Department spokesman denied those allegations in an email to NPR.

In his remarks Tuesday, Jacobs sought to ease concerns that climate data and weather forecasts are at risk of being politicized under the Trump administration.

“There is no pressure to change the way we communicate forecast risk in the future,” Jacobs said. “No one’s job is under threat — not mine, not yours.”

He added that the National Weather Service has his full support, along with the support of the Commerce Department. And Jacobs said it is “critically important” for NWS agencies to communicate information about risks in a variety of ways, including through social media.

It’s also worth noting that unlike other keynote speeches at the National Weather Association meeting — including two other addresses Tuesday — Jacobs’ speech was not livestreamed on Facebook. The association confirmed that decision Tuesday morning, without offering an explanation.

Jacobs spent large portions of his nearly 20-minute speech commending the NWS’s work on Hurricane Dorian, which he described as a particularly tough storm to forecast.

“Up until Advisory 29, the risk to the Gulf states exceeded that in North Carolina,” Jacobs said. “But as everyone in this room knows, forecast models change.”

Jacobs did not mention that the National Hurricane Center issued Advisory 29 around 11 a.m. ET on Saturday, Aug. 31 — some 24 hours before President Trump said this via Twitter: “In addition to Florida — South Carolina, North Carolina, Georgia, and Alabama, will most likely be hit (much) harder than anticipated. Looking like one of the largest hurricanes ever. Already category 5.”

The president’s warning set off alarm bells along the Gulf Coast, where residents scrambled to find information about the threat posed by Dorian. At the NWS office in Birmingham, calls began to pour in.

To ease those fears, Laws said, “We felt like we needed to make a statement on where the storm was going to go, and to reassure our people. And that’s what our mandate is.”

Just 20 minutes after Trump’s tweet, the Birmingham office issued its own tweet, saying, “Alabama will NOT see any impacts from #Dorian.”

On Monday, National Weather Service Director Louis Uccellini said at the weather association’s meeting that the Birmingham office had acted only to quash rumors.

“And they responded not knowing where this information was coming from,” Uccellini said. “Only later, when the retweets and politically based comments came into their office, did they learn the sources of the disinformation.”

On Tuesday, Jacobs ended his remarks by singling out the NWS team in Birmingham for praise, thanking them “for the job that you do and for the lives that you save” — a sentiment that drew prolonged applause.

At one point in Tuesday’s speech, Jacobs asked, “What did I learn over the last week? From now on, the National Weather Service should be at the table with emergency managers and FEMA, at all briefings” — presumably referring to high-level briefings in Washington.

Calling it critically important for the agency to be represented when forecasts are being analyzed, Jacobs said, “We need somebody there who understands how to interpret.”

After Jacobs’ speech, Laws was asked whether he still has faith in the leadership at NOAA.