Honeybees are seen feeding on the honeydew of whiteflies in citrus trees. Traces of neonicotinoids, a family of pesticides, have shown up in honeydew, an important food source for other insects. 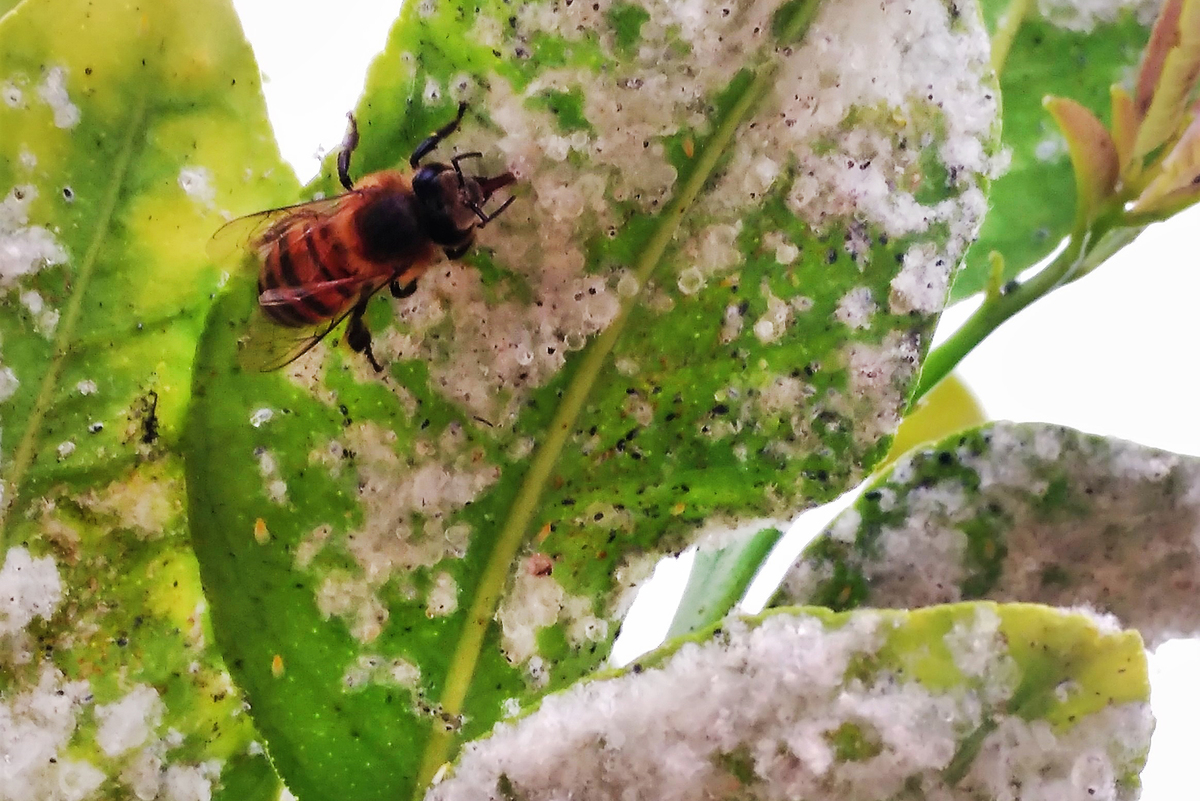 Honeybees are seen feeding on the honeydew of whiteflies in citrus trees. Traces of neonicotinoids, a family of pesticides, have shown up in honeydew, an important food source for other insects.

Consider, for a moment, the circuitous journey of the insecticide called thiamethoxam, on its way to killing a wild wasp.

Alejandro Tena, a researcher at the Valencia Institute of Agricultural Research, in Spain, mixed the chemical into water used to irrigate clementine trees. This is a common practice among citrus farmers. As intended, the tree roots absorbed the insecticide, and it spread throughout the trees’ branches and leaves.

A mealybug landed on the clementine tree, bit through the bark, and began feeding on tree sap underneath. The bug ingested traces of the insecticide. This, in fact, is how thiamethoxam is supposed to work.

Unfortunately, though, the pesticide’s journey wasn’t over. Traces of it showed up in a sticky, sugary, substance called honeydew that the mealybugs excrete. Honeydew is an important food for other insects, such as wasps and hoverflies. In Tena’s experiments, wasps and hoverflies that fed on this contaminated honeydew died in large numbers. Wasps and hoverflies are a fruit grower’s friends, because they help to fight harmful insects.

Tena’s study, published this week in the Proceedings of the National Academy of Sciences, is just the latest evidence that a family of pesticides called neonicotinoids, sometimes just called “neonics,” can pose risks to the insect world that are not fully understood.

“This is the problem with water-soluble pesticides like neonics,” says Christian Krupke, an entomologist at Purdue University. “It’s very hard to predict where they’ll go and what will happen when they’re out in the environment.” Other studies have shown that neonicotinoids that are absorbed by crops and wildflowers can later show up in the plants’ nectar and pollen, affecting bees and other pollinators. A few years ago, scientists found that slugs living in the soil were ingesting neonics and thus poisoning slug-eating beetles.

Neonicotinoids are deadly to a wide range of insects, but they are relatively safe for people and other mammals; much safer, for instance, than an older family of insecticides called organophosphates. In recent years, farmers have rapidly increased their use of neonics. Most corn and soybean seeds that are planted in the United States now come pre-coated with them.

Another study published this week argues that this shift has made American agriculture dramatically more toxic for insects.

The authors of the study came up with a new way to measure the potential impact of various insecticides, taking into account both the level of toxicity and how long the chemicals persist in the environment.

According to this new measure of “toxicity loading,” U.S. agriculture is now 48 times as deadly to insects as it was a quarter-century ago, before neonicotinoids were introduced.

Kendra Klein, a senior staff scientist at Friends of the Earth who co-authored the new study, said in a news release that “we need to phase out neonicotinoid pesticides to protect bees and other insects that are critical to biodiversity.” The study appears in the journal PLOS One.

The companies Bayer and Syngenta, which make neonicotinoids, downplayed the significance of the new studies. Syngenta said in a statement that Tena’s observation of neonic-laced honeydew killing beneficial insects “is not indicative of real-world exposure.” The company pointed out that in this experiment, wasps and hoverflies were only permitted to feed on honeydew from thiamethoxam-treated trees, increasing their exposure. According to Syngenta’s statement, “in the real world, there would be other food sources, such as nectar and honeydew from untreated plants.”

Bayer’s director of pollinator safety, David Fischer, wrote in a statement that neonicotinoids “are typically applied in a way that limits exposure to honey bees and other non-targets.” Most neonicotinoids are not sprayed directly on plants, but are instead used as coatings on seeds. When the seeds are planted, the neonics are trapped in the soil. Only small amounts reach insects living above ground, for instance, when aphids feed on plants treated with the chemicals.

Krupke, from Purdue University, wrote in an email to The Salt that since most neonics remain in the soil, their impact on soil-dwelling insects deserves more attention. Earthworms, for instance, are sensitive to neonicotinoids. “We just don’t know enough about the soil residents to say with certainty” what the effects are,” he wrote.