Netflix Curbs Tobacco Use Onscreen, But Not Pot. What’s Up With That?

Brett Gray (left) as Jamal Turner, and Peggy Blow as Abuela, a lovable, pot-smoking grandma, in the first season of the Netflix teen drama On My Block. 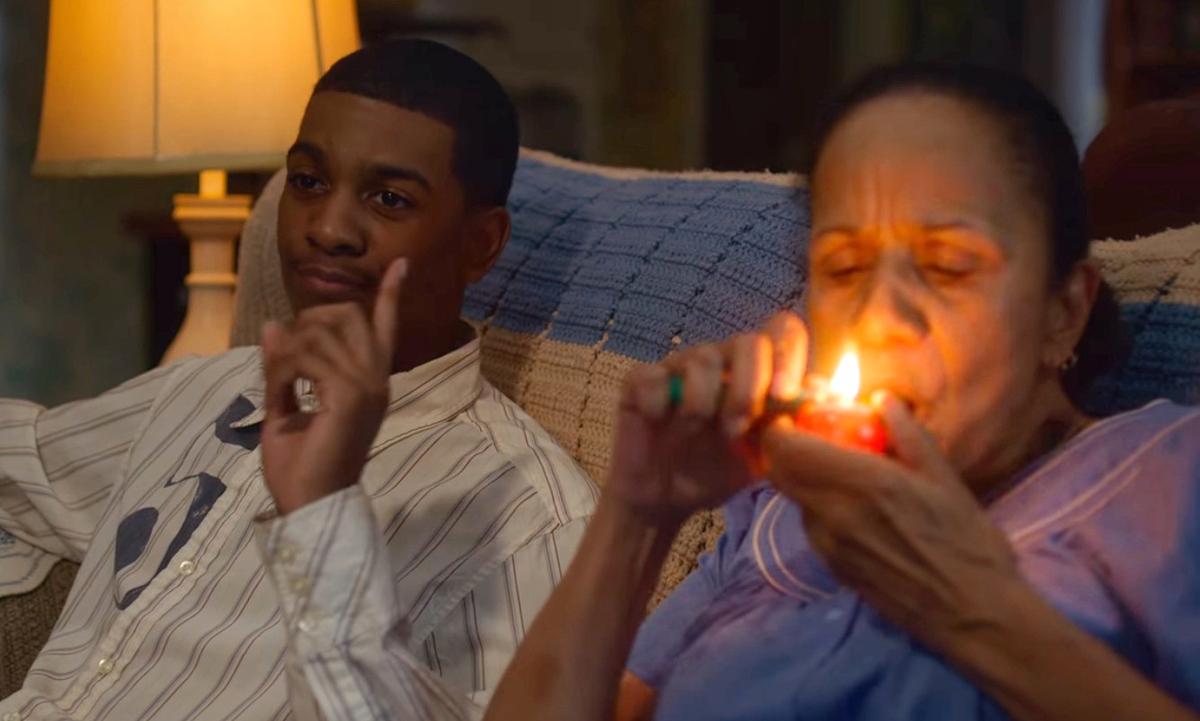 Brett Gray (left) as Jamal Turner, and Peggy Blow as Abuela, a lovable, pot-smoking grandma, in the first season of the Netflix teen drama On My Block.

When is it wrong to show cigarette smoking on television, but OK to depict people smoking cannabis products, particularly in programming popular among young teenagers?

Netflix recently announced it would curb depictions of cigarette smoking in original programming intended for general audiences, after a Truth Initiative study showed its monster summer hit, Stranger Things, featured more tobacco use than any other program on streaming, broadcast or cable. There’s tobacco in every single episode.

Tobacco advertising has been banned on TV and in the movies for decades; when it comes to characters smoking cigarettes onscreen, restrictions are largely self-imposed. The Walt Disney Company is one of the few studios with a comprehensive and public policy about depicting tobacco use in movies.

But what about smoking pot? The Netflix show On My Block is rated TV-14, for audiences, aged 14 and older — exactly the same rating as Stranger Things. The very first scene of On My Block, about high school students in Los Angeles, features kids doing bong hits at a party. There’s a loveable, pot-smoking grandma.

And the Netflix romantic comedy, Always Be My Maybe is rated PG-13. One of its main characters smokes weed.

This troubles Stanton Glantz, a professor of medicine at the University of California, San Francisco, who for years has studied the cardiovascular effects of tobacco smoke, and the effects of tobacco marketing — direct and indirect.

“Rating a film for 14 year olds that’s promoting substance abuse — it’s like the peak of risk,” he says. Glantz says although pot is widely regarded as holistic and harmless, compared to cigarettes, that’s not accurate.

“Marijuana is not harmless,” he says. “Secondhand marijuana smoke has the same kind of adverse effects on your blood vessels that smoking a cigarette does. Chemically it’s not all that different from cigarette smoke, except that the psychoactive agent is different.”

Study after study has shown a correlation between kids’ exposure to cigarettes in the media and their later use of tobacco, Glantz says. There aren’t as many similar studies about pot, although some have begun to emerge.

But as pot legalization gains momentum, using it is becoming normalized in popular culture. A couple of years ago, Netflix showed up at a pop-up event at a West Hollywood dispensary and provided weed varieties based on some of its most popular shows.

These days, cannabis — as opposed to tobacco — can help make a certain kind of company seem cool, says Washington Post opinion writer Alyssa Rosenberg. “Marijuana has sort of a better lobbying message right now than tobacco does,” she observes.

But Rosenberg points out that for much of the 20th century, Big Tobacco actively — and successfully — promoted cigarettes in movies and on TV. “They were planting stories about how Paul Newman was learning to light two cigarettes at a time for a role,” she says. “They supplied green rooms [with cigarettes]. They focused on trying to get stars to smoke on-air during tapings of The Merv Griffin Show. They tried to push fashion editorials to show models smoking.”

So, Rosenberg says, it’s perhaps disingenuous for filmmakers or studios to argue, as Netflix does today, that smoking onscreen is an artistic expression when much of it, historically, came out of marketing departments — product placement.

Glantz worries that kind of product placement might happen again with weed, once it becomes widely commercialized.

“And Netflix ought to be adopting a policy that, you know, is not only based on the bombproof science we have on tobacco,” he says, “but brings common sense into the discussion for these other exposures.”

Of course, Netflix isn’t the only company with a role to play here. Other leading streaming companies haven’t made public any policies about the onscreen use of tobacco or cannabis.Netflix, Hulu and Amazon did not respond to NPR’s requests for comment in regards to such policies.

But earlier this month, attorneys general from 43 states and territories signed a letter sent to streaming companies, asking for better practices when it comes to showing tobacco use on screen. Some public health experts think pot should be next on the agenda.