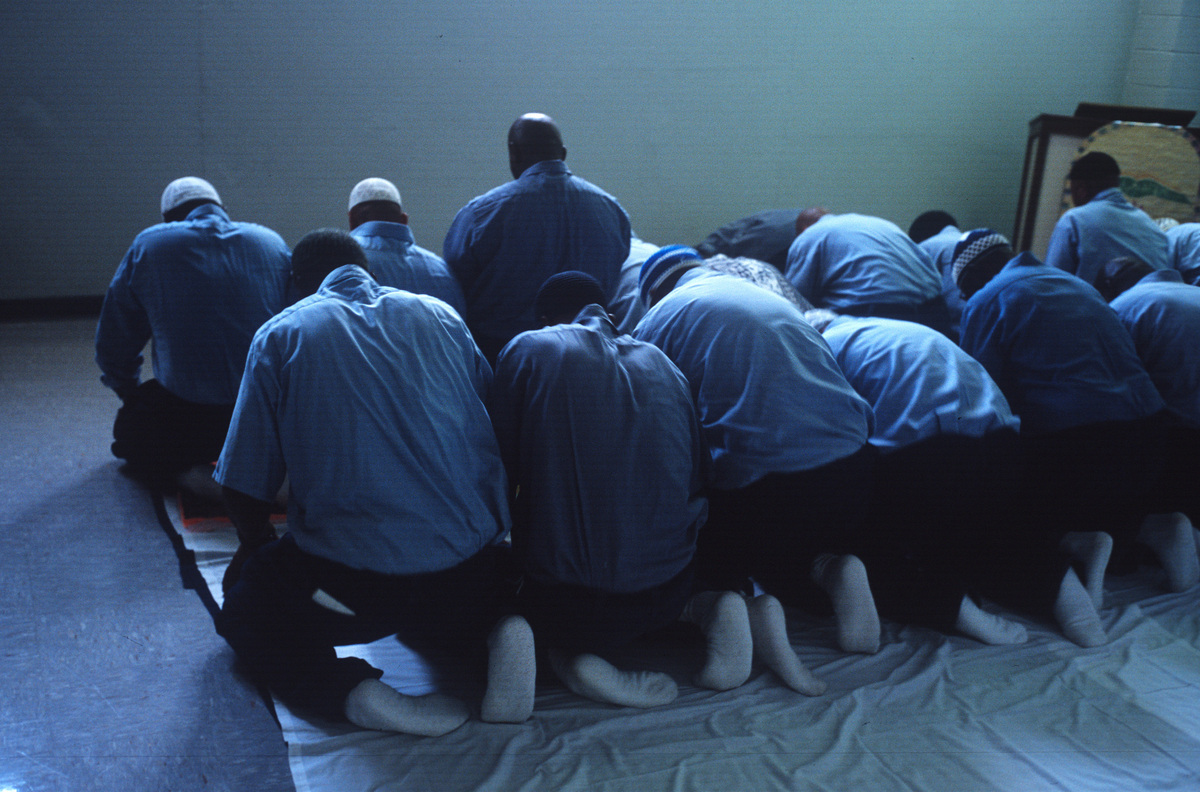 Muslims make up about 9% of state prisoners, though they are only about 1% of the U.S. population, a new report from the civil rights organization Muslim Advocates finds. The report, released Thursday, is the most comprehensive count of Muslims in state prisons so far.

The report also sheds light on the obstacles some incarcerated Muslims face in prison while practicing their faith.

“Getting a picture of the religious preference of state prisoners is, we think, really important and unique,” said Yusuf Saei, the author of the report.

Muslim Advocates requested religious preference data from every state, and based its report on the records it received from 34 states and Washington D.C. Previous data on the religious preference of federal prisoners show that Muslims make up about 12% of that population, but that’s just a small slice of a much bigger picture.

“There are roughly 200,000 federal prisoners and more than 1.3 million state prisoners,” Saei said. “We can say with a high degree of confidence this is one of the most comprehensive looks at religious preference data.” The report only focused on the Muslim population in state prisons.

Knowing how many Muslims are in state prisons, Saei said, helps prison officials understand the importance of respecting religious practice for a significant and growing portion of people in prison. The report also compiled 163 lawsuits between October 2017 and January 2019 in which Muslims alleged their right to practice was being violated.

“Incarcerated Muslims are asking for very basic things: religiously compliant food, books, prayer mats. But they’re not receiving them in many states,” Saei said. “This idea of religious liberty is baked into the U.S. Constitution and federal law specifically protects the religious liberty of prisoners. But our report shows that many state prisons are arbitrarily and illegally preventing incarcerated Muslims from practicing their faith.”

The report compared state policies and found they were inconsistent. Some are very accommodating; others are not accommodating at all. For example, the report finds that only 17 states specifically allow religious head coverings. It also finds that more and more states are fully accommodating Muslim dietary requirements–halal-certified meals. But there are states that still make access to alternative meals difficult or impossible.

“Many state policies do provide for full accommodation of Muslim diet requests. Others, however, provide diminished diet substitutes or no substitutes at all,” the report said. “And in some cases, the paucity of diet accommodations may coerce individuals into violating their dietary beliefs.”

The report provides examples of the inconsistent and in some cases burdensome state policies for Muslim prisoners. In Nevada, for example, to get a meat-substitute diet a prisoner has to pass a diet accommodation interview. In North Dakota, there is a “60-day sincerity test” for anyone who changes religions and has a new religious dietary requirement as part of the practice.

The report recommends some straightforward policies for prisons to facilitate Muslim religious practices such as permitting individual and group prayers for Muslims and training officers on how to make that happen. It also recommends giving prisoners with works assignments days off on their religious holidays, creating clear policies on burial practices that allow for Muslims to be buried within their faith traditions and allowing religious head coverings for men and women.

Prisoners’ religious practice is legally protected by the Religious Land Use and Institutionalized Persons Act, passed by Congress in 2000. That law states the government can’t impede a prisoner’s free exercise of religion without a compelling reason.

“Things that I want to do or congregate activities that I might want to engage in with other prisoners, if they’re done in the name of religion have a higher degree of protection than those same activities such as gathering together or studying together if they’re not done in the name of religion,” said Martin Horn. He teaches at the John Jay College of Criminal Justice and is the former secretary of the Pennsylvania Department of Corrections.

“The state has a very high burden to overcome to avoid allowing them to practice their faith at all and that means not allowing the prayer books, not allowing them to gather for prayer, not allowing access to services of an Imam,” Horn said. “Once something is considered a religious practice, it has to be allowed unless there is a substantial burden on the state and there is no other way to mitigate that burden.”

But advocates point to cases like the recent execution of a Muslim prisoner in Alabama earlier this year. His request for an Imam to be present when he was put to death was denied by the Supreme Court in a 5-4 decision. The majority opinion said the prisoner had waited too long to make the request. In the dissenting opinion, Justice Elena Kagan wrote that the decision was “profoundly wrong.”

And Muslim prison chaplains say the current political climate affects the treatment of Muslim prisoners. That’s problematic for people with so little control over their lives.

Tariq Aquil, the Muslim chaplain credited with developing the halal meal program in California’s state prisons, said he saw that play out before he retired in 2017. Like when a Muslim prisoner’s prayer time coincided with the inmate count.

Because he was praying rather than responding to the roll call.

Some decisions made by the prisons that are obstacles to Muslims practicing their faith come out of ignorance, concerns about costs, like meal plans, or real security concerns like an emergency in the middle of Friday prayer, Aquil said.

But corrections officers live in the real world, he said, and the anti-immigrant, racist and anti-Muslim rhetoric spouted by the current administration has an impact.

“Those of us who’ve worked in an environment where we’re trained are told that we should leave our political and any other attitudes that we have at the front gate when we come to work and that we should treat everyone equal,” Aquil said. “Very few human beings that I know of have this on and off switch where they simply can disengage from hearing last night ‘lock her up’ or ‘send her back’ and then come into the prison and see the people who are attired in the same way or have the same face or something like that. So sometimes it’s subtle and sometimes it’s much more overt.”

Also, Aquil said it’s important to note that over-representation of Muslims in prison isn’t indicative of a lot of Muslims being arrested and convicted.

“About 90 percent of incarcerated Muslims in the United States become Muslims during their incarceration,” he said. “Most of the people that are in prison tend to be repeat offenders and so at some point in time they seem to become aware that they have run the gambit and maybe it’s time for a change.”