Police officers detain opposition candidate and lawyer Lyubov Sobol in Moscow on Saturday. Sobol was one of more than 600 arrested in Saturday’s protests, according to an independent monitoring agency. 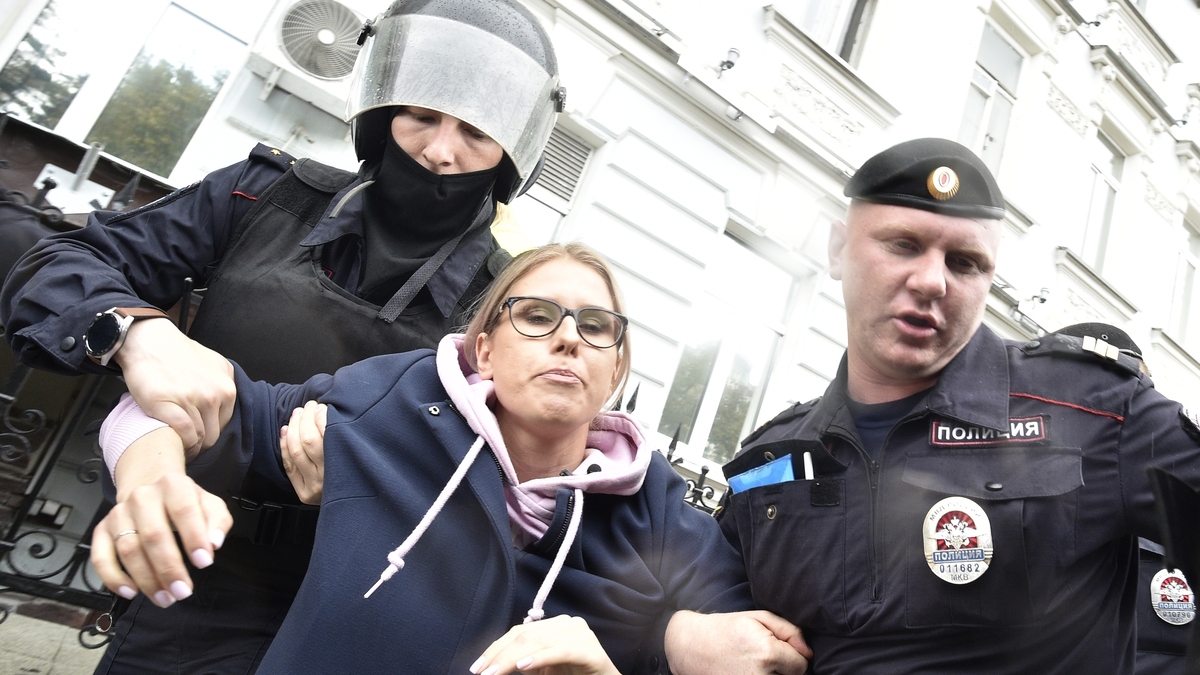 Police officers detain opposition candidate and lawyer Lyubov Sobol in Moscow on Saturday. Sobol was one of more than 600 arrested in Saturday’s protests, according to an independent monitoring agency.

Police detained 600 protesters in Moscow on Saturday, according to OVD-info, an independent group that monitors protests and policing in Russia.

Demonstrators in Moscow have been demanding that opposition candidates be allowed to register in city elections. Police arrested more than 1,000 people at an election-focused protest last week.

The Moscow City Duma is controlled by the pro-Kremlin United Russia party. All of its 45 seats, which carry five-year terms, are up for re-election on Sept. 8. The disagreement between protesters and election authorities hinges on the signature-gathering process for candidates. Election authorities say certain opposition candidates did not gather enough valid signatures on their nominating petitions to be eligible for the race. Opposition candidates and their supporters say signatures have been invalidated for political reasons, to hinder the democratic process and prevent anti-Kremlin candidates from getting on the ballot.

Lyubov Sobol, one of the opposition candidates who election officials say failed to qualify for the ballot, was one of the protesters arrested on Saturday. Sobol has been on hunger strike for 21 days, according to the BBC.

As NPR’s Lucian Kim has reported, the Moscow city elections have national significance; opponents of Russian President Vladimir Putin are trying to use local elections to chip away at his political support in advance of Russia’s 2024 presidential election.

“Moscow is the key,” Kim told Morning Edition last month. “It’s Russia’s largest city and is probably also the place where the opposition has a potentially large support base.”

According to Kim, a Putin spokesperson has said that though the Kremlin is following the developments, local elections remain under the jurisdiction of local authorities.

The Associated Press reported Saturday that Russia’s Investigative Committee plans to open a criminal case against the anti-corruption foundation of prominent opposition figure Alexei Navalny. Navalny is currently serving a 30-day jail sentence for his role in last week’s protest, and he recently raised the possibility that he had been poisoned while in custody.

Moscow’s police have been criticized for using violent methods to control protests. According to the BBC, Moscow Mayor Sergei Sobyanin said protesters last week “simply compelled the police to use force, which was perfectly appropriate for the situation.”

Fontanka.ru, a local news site, reported that 2,000 people rallied in St. Petersburg on Saturday to support protesters in Moscow. Local police said 1,000 were in attendance.