Swab tests at a military residence in Fort Benning, Ga., reveal the presence of lead. 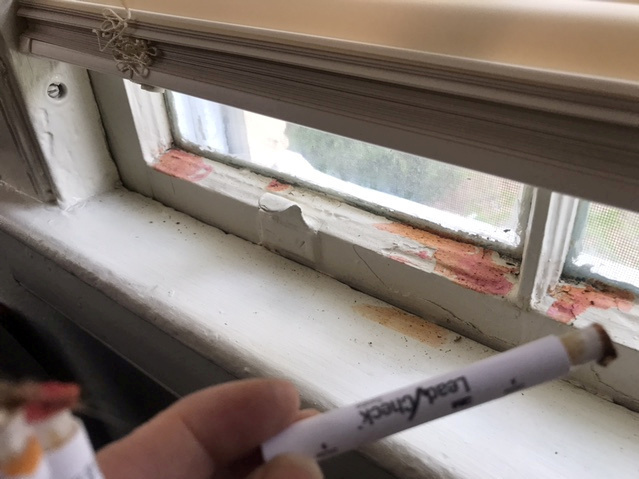 Swab tests at a military residence in Fort Benning, Ga., reveal the presence of lead.

Severe mold, asbestos and electrical hazards are among the dangers in private military housing for thousands of service members’ families, according to a new survey conducted by the Military Family Advisory Network.

The report was released Wednesday, in conjunction with a Senate Armed Services Committee hearing about the state of privately managed military housing.

Nearly 17,000 people responded to the survey across 46 states. And more than 55 percent of participants who lived in private housing said they were dissatisfied with how management companies oversaw their dwellings.

“Military families should not have to worry about their safety inside their own homes, and people need to know about the terrible conditions some military families are living in,” says Shannon Razsadin, executive director of the Military Family Advisory Network.

Razsadin tells NPR in an email that the organization learned about substandard living conditions from its advisory board. It then sent out a questionnaire and sifted through respondents’ reports of “unsafe living conditions, stories of sick children, and copies of outstanding work orders from every state that has privatized military housing.”

Respondents described living in dangerous environments that ultimately affected their loved ones in life-changing ways.

After the Beckstrom family’s home in Fort Bragg, N.C., flooded with untreated sewer water, toxic substances remained in their house. The family said the company that managed the property, Corvias, refused the family’s numerous requests to relocate. Eventually the Beckstroms were able to move, but all three children now suffer from severe medical conditions, which the report maintains may have been caused by environmental hazards.

The Nichols moved into a home in West Point, N.Y., only to discover after family members grew ill that every vent was covered with black mold. Balfour Beatty, which was managing the property, first sent a representative who did not do any mold sampling. The company insisted the mold levels were within normal limits, only agreeing that the family should move months later after test results showed toxic levels. “We nearly lost our children,” said Mrs. Nichols.

Other families reported lead, asbestos, carbon monoxide and poor water quality – in addition to shoddy maintenance and faulty wiring. “Only after threatening a lawsuit and going public did they end up covering my deductible from renter’s insurance,” said a respondent who claimed “strong electrical currents” nearly led to a house fire.

There were also persistent problems with pests, including snakes, cockroaches and “400 bats.” A resident in Hawaii said, “Rats would die in our attic, and they’d only come remove them once maggots were falling from the ceiling.”

But concerns were often ignored, the Military Family Advisory Network concluded, and people feared that their complaints could trigger retaliation on the careers of service members.

“Families are afraid to come forward and they have no recourse,” the report said. It described one military spouse as saying that the housing company’s community manager “threatened to call the service member’s commander if they continued to ‘complain.’ “

Neither Corvias nor Balfour Beatty immediately responded to NPR’s requests for comment.

In 1996, the Defense Department said that military housing was in dire straits. The Military Housing Privatization Initiative was established that year to improve housing conditions for service members, and it paved the way for private companies to take over family housing on military bases.

“It is unacceptable for our families, who sacrifice so much, to have to endure these hardships in their own homes,” said Secretary of the Army Mark Esper and Chief of Staff of the Army Gen. Mark Milley in a statement emailed to NPR.

Vowing to hold the chain of command and private contractors accountable, they said they directed an inspector general investigation and have taken “other actions.”

The survey and Senate hearing follows a series of Reuters investigations into private military housing, revealing persistent hazards and landlords who may make billions from long-term contracts.

According to the wire service, data for Defense Department reports are collected by private firms that provide housing for members of the military. Resident satisfaction is a factor used to determine the companies’ payments.