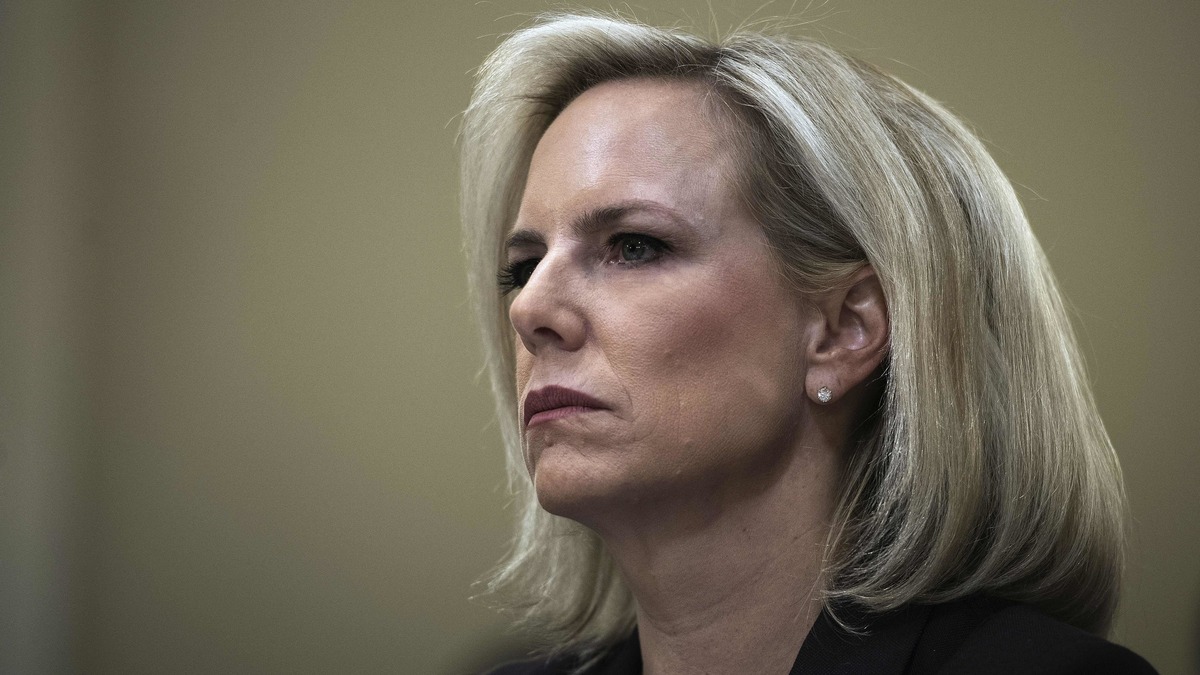 Secretary of Homeland Security Kirstjen Nielsen is leaving her post, President Trump announced Sunday as he continues to focus on restricting border crossings amid a recent surge. Nielsen had recently warned a congressional panel of a “catastrophe” on the southern border after the number of crossings hit a 10-year high.

Trump confirmed the news in a tweet, saying, “I would like to thank her for her service.”

Secretary of Homeland Security Kirstjen Nielsen will be leaving her position, and I would like to thank her for her service….

Trump said Kevin McAleenan, the current commissioner of U.S. Customs and Border Protection, would serve as acting secretary. Nielsen said Sunday night that she will stay on through Wednesday.

The change at the top comes with other uncertainty over management at the Department of Homeland Security. The president on Friday dropped his nominee to lead Immigration and Customs Enforcement, Ronald Vitiello, telling reporters, “We want to go in a tougher direction.”

Trump’s own response to the situation at the border in recent days has been frenetic. First, he threatened to close the southern border as soon as last week. Then, he backed off that threat and issued a new one, saying he would put hefty tariffs on cars made in Mexico if the country did not do more to stop the flow of migrants as well as drugs coming north. He gave Mexico a “one-year warning.”

Often the primary person working to turn Trump’s harsh immigration rhetoric into policy, Nielsen was under intense scrutiny. As recently as March, she faced tough questioning from House Democrats over the treatment of migrants, especially children, at the southern border.

Nielsen is Trump’s second secretary of homeland security, taking over the cabinet post in December 2017 after John Kelly became White House chief of staff. Nielsen had worked as a top aide to Kelly at both DHS and the White House.

Her tenure was marked throughout by tensions with Trump, who reportedly lashed out at her several times because illegal border crossings have not been stopped. Nielsen faced more public pressure after the Trump administration enacted a policy of family separation that resulted in thousands of migrant children being separated from their parents, which the president ultimately reversed.

In her resignation letter posted on Twitter, Nielsen alluded to her rocky tenure.

“Despite our progress in reforming homeland security for a new age, I have determined that it is the right time for me to step aside,” wrote Nielsen. “I hope that the next Secretary will have the support of Congress and the courts in fixing the laws that have impeded our ability to fully secure America’s borders and have contributed to discord in our nation’s discourse.”

Democrats, who have been critical of Nielsen’s actions at DHS throughout her time there, said her departure showed that Trump’s immigration policy was too extreme.

“When even the most radical voices in the administration aren’t radical enough for President Trump, you know he’s completely lost touch with the American people,” said Senate minority leader Chuck Schumer, D-N.Y.

“Through lies, misdirection and rationalizations, Nielsen defended the indefensible and presided over policies, including family separation, that will live in infamy,” Frank Sharry, executive director of America’s Voice, a pro-immigration group, said in a statement. Sharry added that he does not expect the administration to back off its hardline approach to immigration policy. “While she will not be missed, we have no illusions that her replacement will usher in a brighter day at DHS.”

The number of migrants apprehended at the border jumped to more than 100,000 last month, the biggest monthly total in more than a decade. As the weather warms up, immigration authorities warn that the flow of migrants crossing the border will continue to grow, possibly reaching as high as 150,000 per month.

While illegal border crossings are still far below the highs seen two decades ago, administration officials have warned that the current surge has led to a humanitarian crisis and put the immigration system at a “breaking point.”

That’s because the majority of migrants arriving now are families and children fleeing violence and poverty in Central America. Unlike individual migrants looking for work, many of these migrants are seeking asylum and must be allowed to pursue their claims in immigration court.

Overwhelmed by the influx, Customs and Border Protection has begun releasing more families with a notice to appear in immigration court instead of first handing them over to Immigration and Customs Enforcement for processing and detention.

Nielsen tried to shift resources within her department to help with processing the migrants and last week appointed a Border Patrol veteran to serve as coordinator of the department’s response to the “border crisis.”

“I want to be clear with the American people: there is an unprecedented emergency at the southern border, and DHS is leading a true government-wide emergency response,” Nielsen said in a statement announcing the move.

Nielsen also joined President Trump in calling on Congress to close what they call “loopholes” in immigration law to make it easier to detain and deport migrant families and kids.

On defense with Trump — and for him

Throughout her tenure, Trump blamed Nielsen for an inability to get Congress to fully fund a wall on the southern U.S. border with Mexico, even though she was not involved in the spending deal Trump reached with congressional leaders earlier in 2018. The border wall funding question led to a stalemate that caused the longest partial government shutdown in U.S. history — with the president following through on threats not to sign critical spending bills unless he got what he deemed sufficient funding for his border wall and with congressional Democrats rejecting any legislation that would provide such funding. Trump ultimately took the highly unusual step of declaring a national emergency in order to go around Congress to secure more border wall funding, a move that Democrats are challenging in court.

Democrats and immigration advocates criticized Nielsen for policies she advocated that actively sought to separate children from their parents at the border, including a protest inside a Mexican restaurant in Washington where the secretary was eating dinner last June.

“The law says if you cross between the ports of entry, you are entering without inspection and that is a crime,” Nielsen said, defending herself in an interview with NPR’s John Burnett in May 2018.

The administration backed away from that policy after a public outcry and in light of court rulings — just days after Nielsen had mounted a vigorous public defense of the controversial policy.

Nielsen had to defend Trump on other issues, too.

In January 2018, a little over a month after she was sworn in as DHS secretary, Nielsen testified to a Senate panel that she had not heard Trump describe some African nations as “shithole countries,” although she conceded that he had used “tough language” in a meeting on immigration issues that included members of Congress who insisted Trump had, in fact, used the pejorative.

Months later, in response to a reporter’s question, she said she “was not aware of” reports from U.S. intelligence agencies that concluded that the Russian government actively tried to swing the 2016 presidential election to Trump and away from Democrat Hillary Clinton.

Nielsen’s characterization of the foreign interference threat to U.S. elections evolved: She later said that although it continued to happen, it was not taking place with the same intensity as it had in 2016.

DHS and other agencies released a statement ahead of Election Day 2018 that said the focus of foreign influence operations was on disinformation via social media platforms and less on cyberattacks aimed at stealing embarrassing information about political targets or disrupting the actual working of elections.