Students at Grinnell College in Iowa hold a protest on Dec. 7 in support of expanding the student workers’ union. 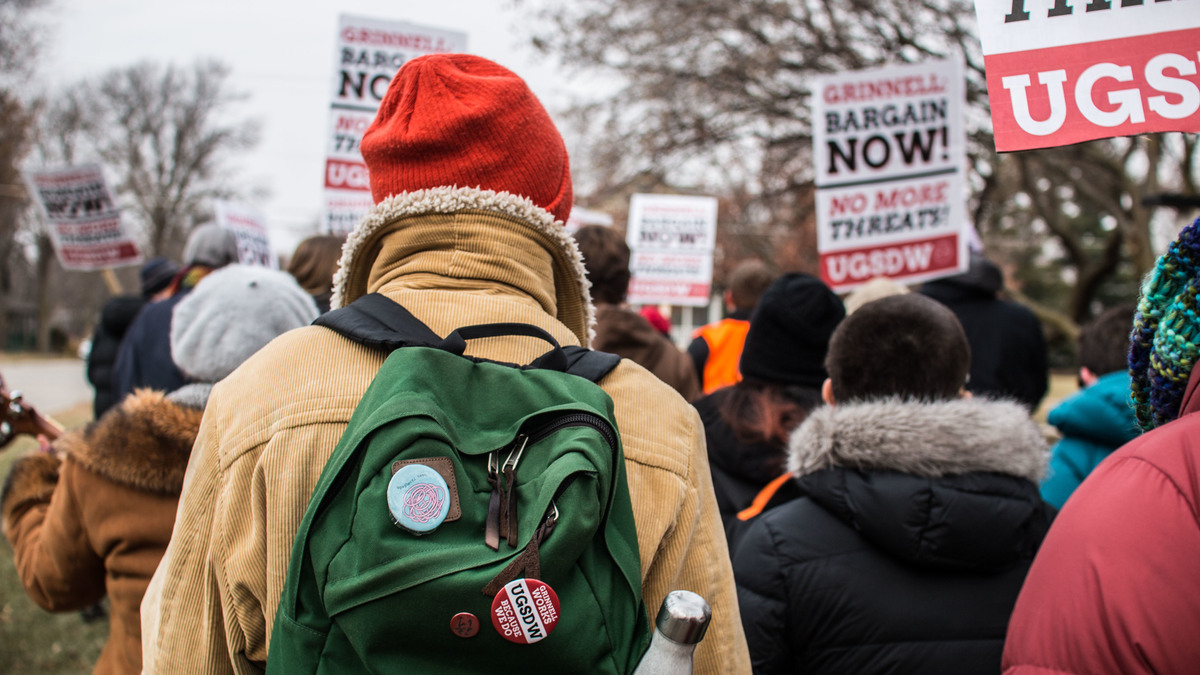 Students at Grinnell College in Iowa hold a protest on Dec. 7 in support of expanding the student workers’ union.

A face-off between students and administrators at Grinnell College in Iowa could affect schools across the U.S., through a case that could prompt the National Labor Relations Board to reconsider whether student employees at private colleges and universities can form unions.

But the makeup of the NLRB has shifted, with Trump appointees sitting on the powerful board, and it’s not clear whether the Columbia decision will stand.

As Inside Higher Ed has reported, some student-worker unions have backed down in disputes with private colleges and universities, concerned that they’d lose their case before Trump’s NLRB and set a precedent they’d rather avoid.

But students at Grinnell College are holding firm.

“Grinnell’s president, Raynard Kington, who makes a cool $600,000 a year, is hoping that Trump’s NLRB appointees will save him from having to address the economic struggles his middle-class and low-income students face,” the student union, UGSDW, wrote in a press release. “It’s childish and appalling. UGSDW will not be scared off by Grinnell’s illegal threats, and the shady tactics of its union-busting lawyers.”

The college, located in Grinnell, Iowa, is a private liberal arts school with fewer than 2,000 students, all undergraduates. In 2016, the campus’ dining service student workers formed a union.

This year, student workers across the campus overwhelmingly voted to expand that union to cover all student employees.

The college, which had not objected to unionizing the dining hall workers, balked at that prospect.

In an appeal to the NLRB, filed Monday, the college argues that the work performed by students “is an integral part of the learning process that occurs both in and out of Grinnell’s classrooms, laboratories and lecture halls.”

Unlike dining hall workers serving food, students who assist a faculty member or tutor their peers are not truly employees, the school says: “The funding received by Grinnell’s undergraduates is, in fact, a form of financial aid that helps the students pay for their education; it is not compensation for services rendered.”

The students reject this argument.

“Grinnell has a student ’employment’ office; on-campus ’employment’ is part of many of our members’ financial aid packages; we are ’employees’ on Grinnell’s tax forms,” the student union wrote earlier this year. “But why, when we want to unionize, are we suddenly not employees?”

The college also notes that the vast majority of students at the college — more than 90 percent — work for the college at some point in their education. Unionization would force the college to negotiate with “essentially the entire Grinnell student body,” which, the school says, would have a negative impact on the educational mission.

The students say there is no evidence that unionizing hurts academic learning or student-faculty relationships.

The college has asked the NLRB to overturn the Columbia decision completely.

In the 2016 decision, the NLRB determined there was “no compelling reason” to exclude student assistants from employee protections. (The dispute centers on private institutions — student workers at public schools, which are governed by state laws instead of federal law, have been unionizing for decades.)

Now, in 2018, some observers see another reversal in the works. The Des Moines Register spoke to William B. Gould IV, former chairman of the NLRB, who said Grinnell is likely to win, a decision that would “impede and eliminate student organizing.”

But the Grinnell case is unusual, as Iowa Public Radio notes, because it focuses on undergraduate students.

Most disputes over private institutions and student unionization focus on graduate students. As a result, one expert tells Iowa Public Radio, the NLRB might choose not to set a new precedent with this particular case.

The NLRB recently ruled against the University of Chicago in a labor dispute with students, but sidestepped the question of the validity of the Columbia decision.