Male pilgrims with painted faces wear sarongs and beads on a street in Erumely, on the pilgrimage route to the Sabarimala temple in southern India. Men of all ages are allowed to visit the temple, but women between the ages of 10 and 50 are banned. 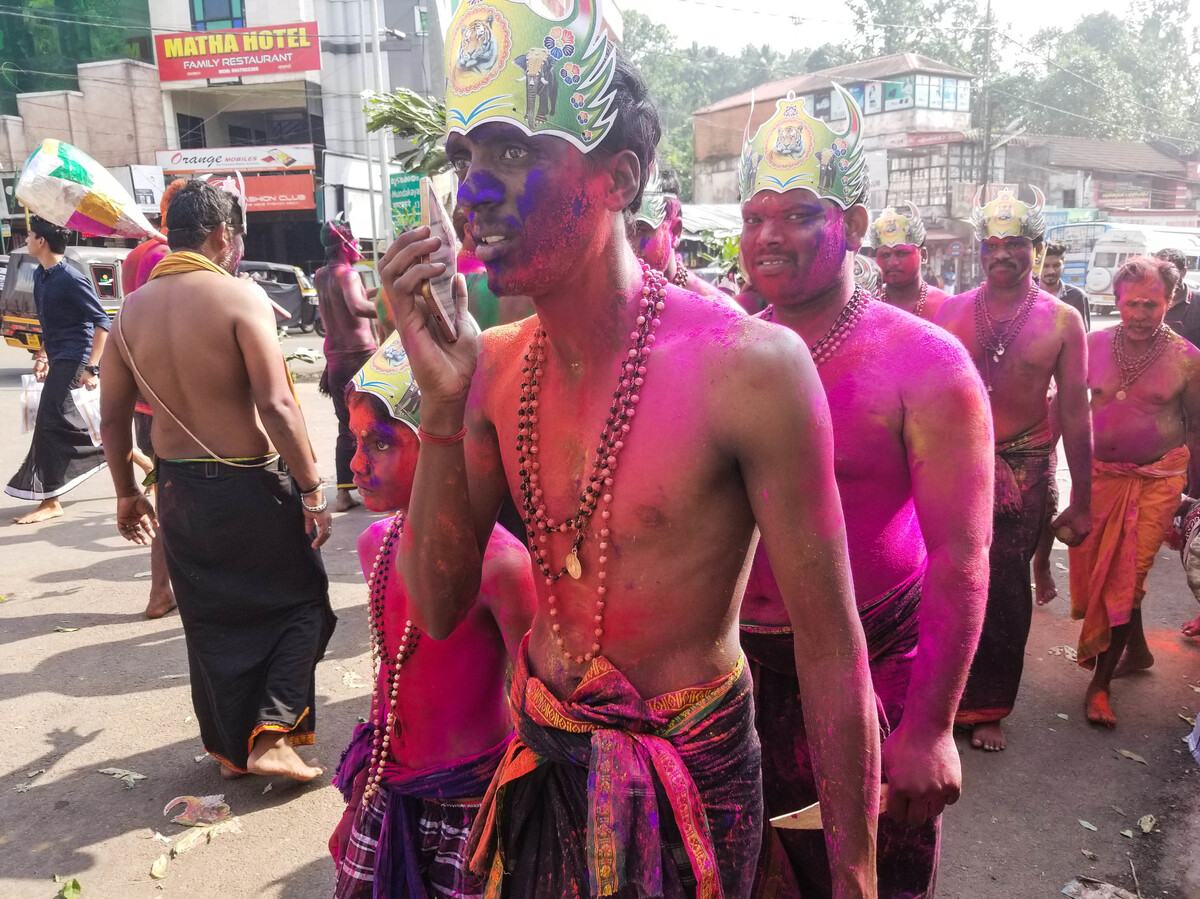 Male pilgrims with painted faces wear sarongs and beads on a street in Erumely, on the pilgrimage route to the Sabarimala temple in southern India. Men of all ages are allowed to visit the temple, but women between the ages of 10 and 50 are banned.

Hindu men swathed in black sarongs, their faces painted and chests strewn with beads, trek through the jungles of southwest India, carrying provisions in bundles on top of their heads. They come from all over India, and the world, to visit an ancient temple inside a tiger reserve in the state of Kerala. They travel the final three miles on foot, and some walk for the entire 50-mile approach.

Devotees carry offerings on their heads and wait to worship at the Sabarimala temple in November. 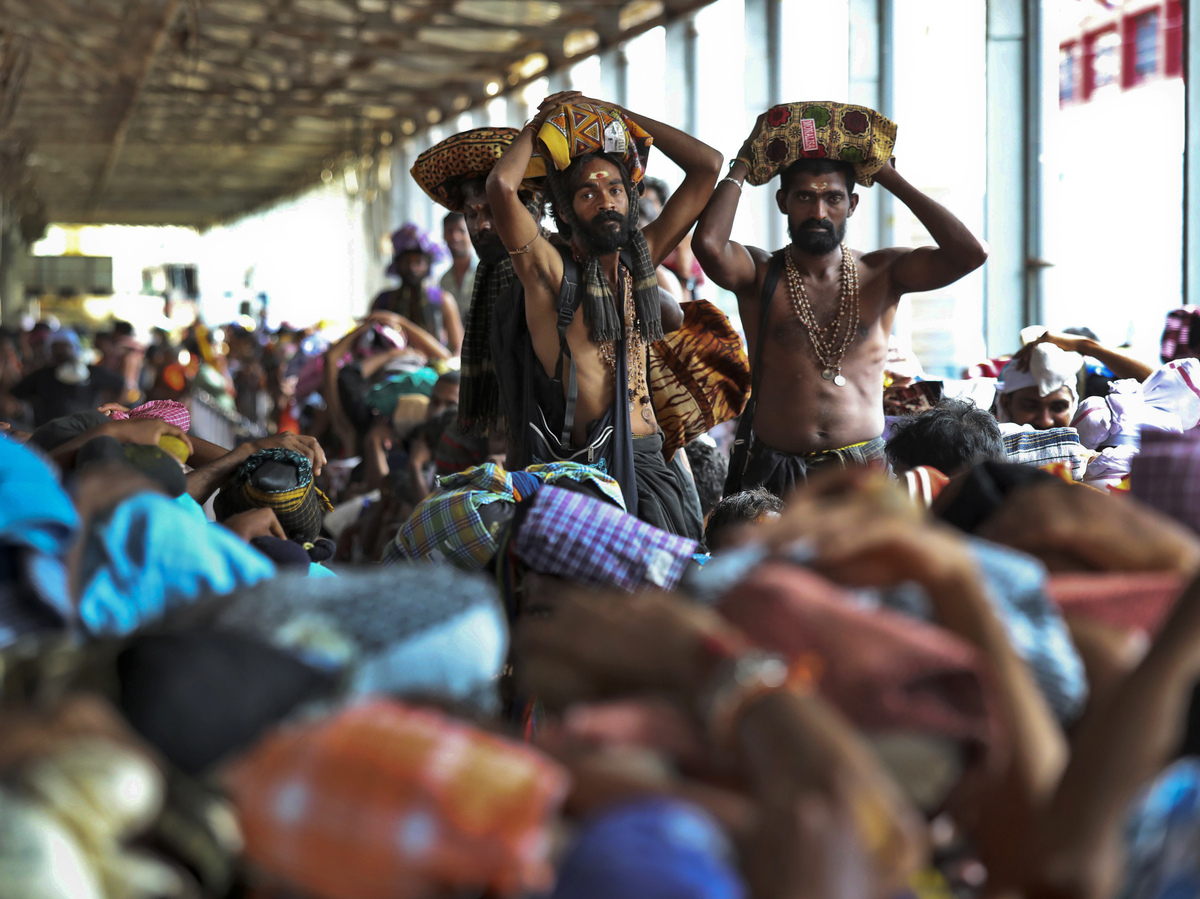 Devotees carry offerings on their heads and wait to worship at the Sabarimala temple in November.

The Sabarimala temple is famous for this pilgrimage. It attracts millions of Hindu devotees each year. But most of them are men, because the temple is also famous for something else: a partial ban on female worshipers.

The temple is dedicated to Lord Ayyappa, a Hindu god whose devotees believe is celibate and cannot have contact with women of menstruating age. Some believe that’s because such women are impure. Others believe it’s because they are of childbearing age — fertile, and thus a temptation to Lord Ayyappa. (Hinduism has no central authority on religious doctrine, and believers’ rationales vary.)

No matter the reason, women between 10 and 50 years old have long been banned from entering the Sabarimala temple. But the ban has clashed with modern sensibilities, and now the temple finds itself at the center of a legal and political battle.

Women police personnel guard against protesters blocking the path of women of menstruating age going to the Sabarimala temple at Nilakkal, a base camp on the way to the temple, in October. 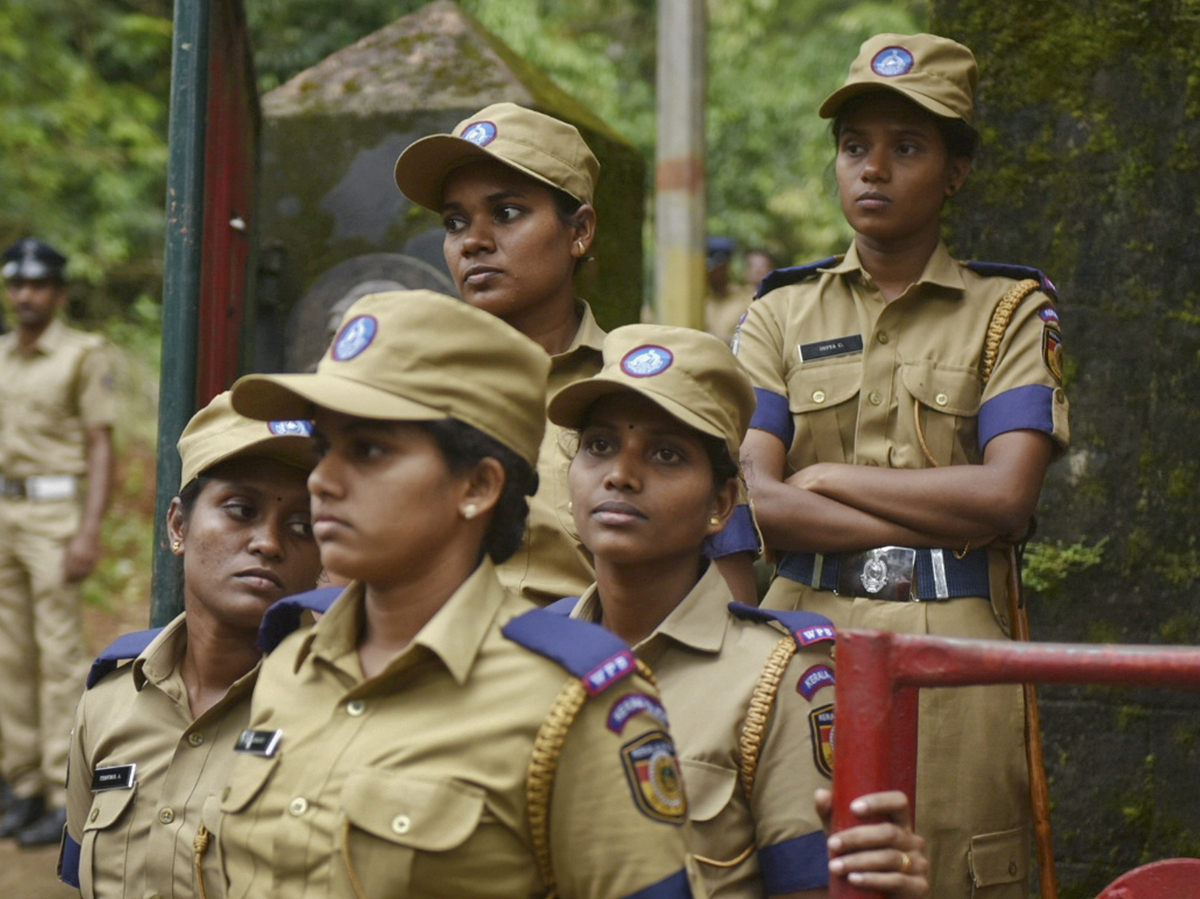 Women police personnel guard against protesters blocking the path of women of menstruating age going to the Sabarimala temple at Nilakkal, a base camp on the way to the temple, in October.

Since then, hundreds of thousands of protesters, male and female devotees and some right-wing Hindu politicians have turned out to block women from approaching the temple.

Not one woman between the ages of 10 and 50 has been able to reach Sabarimala since the court ruled Sept. 28 that they should be able to do so.

Many say women’s presence at Sabarimala offends their faith, and that the Supreme Court ruling infringes on their freedom of religion.

“This is a democratic country. This is not a judicial country,” says Srinan G., 26, a pilgrim who, like many people from southern India, uses only an initial for one of his names. “They should obviously take into account the views of the people.”

An online poll by an Indian newspaper found 52.6 percent of respondents believe the Supreme Court’s order to allow women of all ages inside the Sabarimala temple interferes with tradition.

Thousands of protesters, including local politicians from Prime Minister Narendra Modi’s ruling Bharatiya Janata Party, have been arrested since September for taking part in violent demonstrations against the court’s verdict.

Devotees of Lord Ayyappa, the deity of the Sabarimala temple in India’s Kerala state, protest against a Supreme Court verdict in Ahmadabad, India, in October. The temple had barred women of menstruating age from entering the temple but India’s Supreme Court lifted the ban. 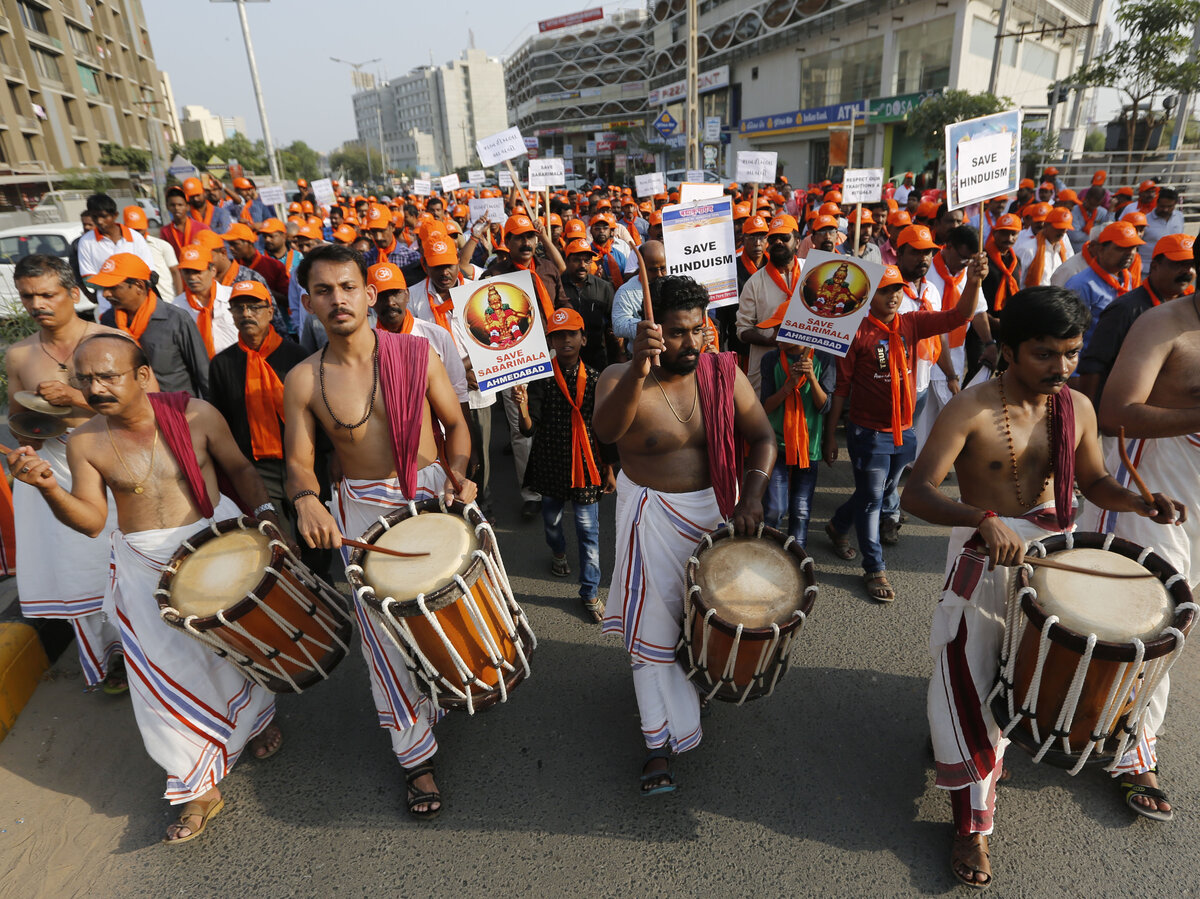 Devotees of Lord Ayyappa, the deity of the Sabarimala temple in India’s Kerala state, protest against a Supreme Court verdict in Ahmadabad, India, in October. The temple had barred women of menstruating age from entering the temple but India’s Supreme Court lifted the ban.

Some female devotees have taken part in the protests, arguing that they do not want the right to visit the temple — and vowing to block others who do.

One older female pilgrim whom NPR met along the route says she visited Sabarimala as a child, but then waited until age 53, when she stopped getting her period, before visiting again.

“I’ll block younger women with my own body if I have to,” says Sarassama Susheelan Nair.

When NPR journalists — two women under age 50 — visited the area to report this story, police offered a patrol car and several officers to escort us, to ensure our safety. Several taxi companies refused to drive us to Nilakkal, the temple’s base camp, about 13 miles from the temple. The closest we could convince a driver to take us was to another town, Erumely, about 20 miles from the temple.

When a prominent Hindu feminist, Trupti Desai, announced in October her intention to visit Sabarimala, she says she received hundreds of death threats.

“They said, ‘If you come to Kerala, we’ll break your limbs. We’ll cut you up into pieces,'” Desai recalls.

Many mosques, synagogues and churches around the world maintain segregated prayer spaces for women. In India, many Hindu temples don’t allow women into the innermost chamber where an idol is positioned. Many Hindus also believe that women should not visit shrines or temples on days when they are menstruating.

Demanding their “Right to Pray,” Indian feminists in late 2015 began lobbying for women to be allowed into temples and mosques across the country. In 2016, Desai and other activists successfully gained entry to the Shani Shingnapur temple in the Indian state of Maharashtra, which had previously banned women of all ages. Temple trustees lifted the ban after a Bombay High Court ruling.

Sabarimala’s policy was also challenged because it is one of the country’s most famous temples.

Last month, when Desai landed at an airport 95 miles away from Sabarimala, protesters blocked airport exits and trapped her inside for 13 hours, until she eventually turned back. They threatened to attack taxi drivers who might drive her in the direction of the temple, she says.

“The right to pray and the right to equality — these are given to us by the Indian constitution. It grants us freedom to practice any religion, and protects us from sexual discrimination,” Desai says. “Hindu gods never discriminate among their devotees.”

When female TV correspondents tried to broadcast live outside the temple in October, they were attacked.

Police, meanwhile, are in a difficult position. They’re tasked with maintaining public safety and carrying out the Supreme Court order to guarantee women safe passage to the temple. But most of the officers patrolling the area are local residents and are facing pressure.

“As a police officer, my personal emotions cannot matter. It’s about implementing law and order. Whatever is the ruling of the Supreme Court, that’s the law of the land,” says T. Narayanan, the district police chief.

He has set up a new command center, where officers review live-streaming video 24 hours a day, from 36 cameras installed on roads leading to the temple. They’re keeping an eye out for potentially rowdy protesters who might commit violence — and for women, whose safety they are tasked with ensuring.

At least 5,000 extra police have been deployed along the Sabarimala pilgrimage route since the Supreme Court’s ruling in September.

In recent years, India’s Supreme Court has delivered landmark rulings to protect the rights of women, religious minorities and homosexuals. But some Indians see that trend as too progressive, too Western.

“What is progressive for you may not be progressive for me. Merely because something happened in America or in Europe, it need not be necessarily applicable to or acceptable to the culture of this country,” says Cyriac Joseph, a retired Supreme Court justice who disagrees with his former colleagues’ decision to allow women to go to the temple.

As a member of India’s Christian minority, Joseph believes the court should be especially careful to protect the rights of any religious group to worship as it sees fit.

“For example, in the Catholic Church, only men are allowed to be priests. Will the court say this is against equality? That is ridiculous!” he says.

Last month, India’s Supreme Court justices responded to the public outrage by agreeing to review their decision on Sabarimala. Devotees are calling it an initial victory.

A hearing is set for Jan. 22. If justices undo their previous ruling, due to public demand, it could set a precedent as India’s Supreme Court struggles for independence in the country’s culture wars.