Pro-democracy activist Joshua Wong addresses the crowd outside Hong Kong’s Legislative Council on Monday, during a demonstration demanding Hong Kong’s leaders to step down and permanently withdraw an extradition bill. 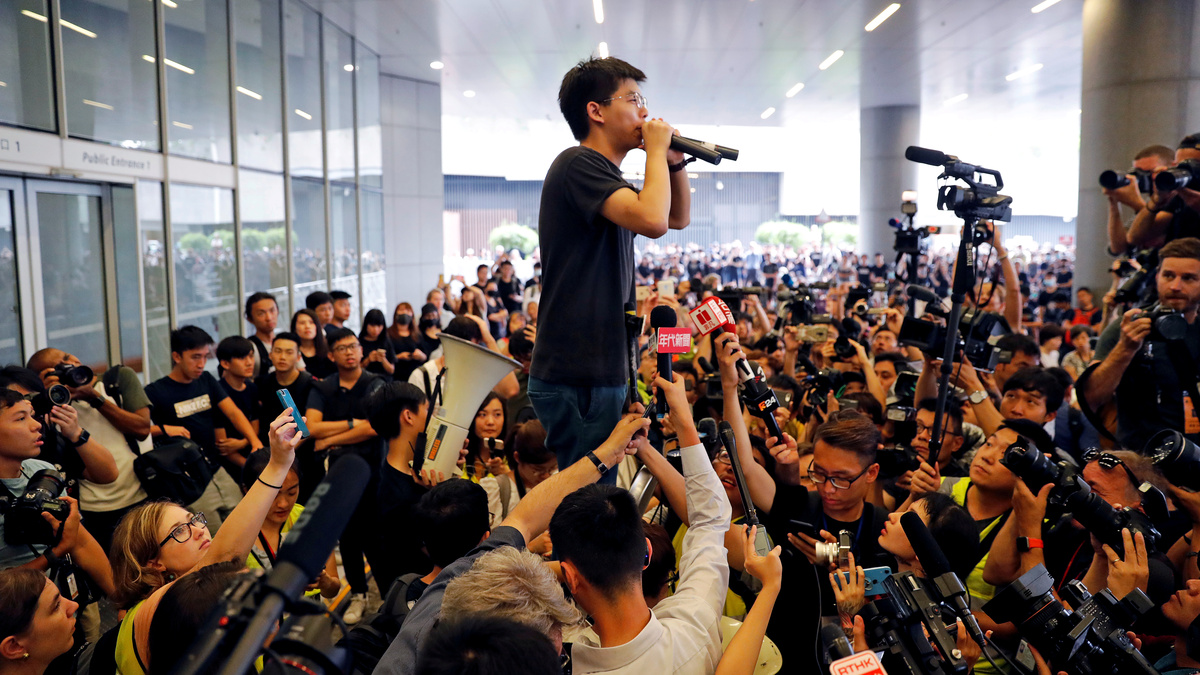 Pro-democracy activist Joshua Wong addresses the crowd outside Hong Kong’s Legislative Council on Monday, during a demonstration demanding Hong Kong’s leaders to step down and permanently withdraw an extradition bill.

Wong, 22, had been serving a two-month prison term for contempt of court, related to the 2014 Umbrella Movement street demonstrations. But he was released after serving only one month of that sentence.

The leader of the political group Demosisto, Wong said he isn’t satisfied with Lam’s plan to suspend the extradition measure.

Speaking after his release, Wong also said, “I will join the fight with Hong Kong people against the bill until the government backs down,” according to the South China Morning Post.

Wong was only 17 when he became the face of Hong Kong’s protest in 2014, as thousands of demonstrators disrupted the central government district in a call for direct democracy.

Wong was released after protesters mounted a huge march for the second Sunday in a row, with people filling the streets from Victoria Park to Admiralty, where the government’s offices are based. Estimates of the crowd’s size ranged from the police figure of 338,000 to organizers’ estimate of nearly 2 million, the Morning Post reports. Those protest marches continued on Monday, albeit at a smaller scale.

The demonstrations are a very public response to a proposed law that would allow people who are accused of crimes in Hong Kong to be extradited to mainland China, where the laws and judicial system are more restrictive and less transparent.

On Sunday, Lam issued a rare apology for the way she has managed the extradition bill. That move came one day after Lam said she would put the bill on hold — a step that demonstrators immediately rejected as a half-measure.

Demonstrators see the extradition proposal as another erosion of freedoms and rights in Hong Kong following its 1997 handover from British rule to China’s central government.

The protests are the largest since 2014, when Beijing angered democracy advocates by requiring any candidate for Hong Kong’s top job to be approved by a committee that’s loyal to China’s central government.

Hong Kong’s Legislative Council has 70 lawmakers — but only 35 of them are directly elected by geographic area, according to its website. And if legislators go too far in advocating for Hong Kong’s independence, they’re subject to being banned from office.

Charles Mok, a pro-democracy member of the Hong Kong Legislative Council, says that despite the repeated public demonstrations against the extradition bill, the measure will be adopted if the government insists on pushing it through.

“Because of the design of the system, we are always in the minority,” Mok tells NPR’s Morning Edition. “So that’s why people want universal suffrage — real democracy — in Hong Kong. But we didn’t get that.”

As leaders in Hong Kong try to navigate the storm over the bill, NPR’s Anthony Kuhn reports for our Newscast unit that “China’s Foreign Ministry meanwhile, blamed Western media for inciting foreign governments to meddle in China’s internal affairs.”