Dwayne Tomah, the youngest fluent Passamaquoddy speaker, sings a Passamaquoddy song outside of his home in Perry, Maine. Tomah is translating and interpreting songs and stories from wax cylinders recorded nearly 130 years ago. 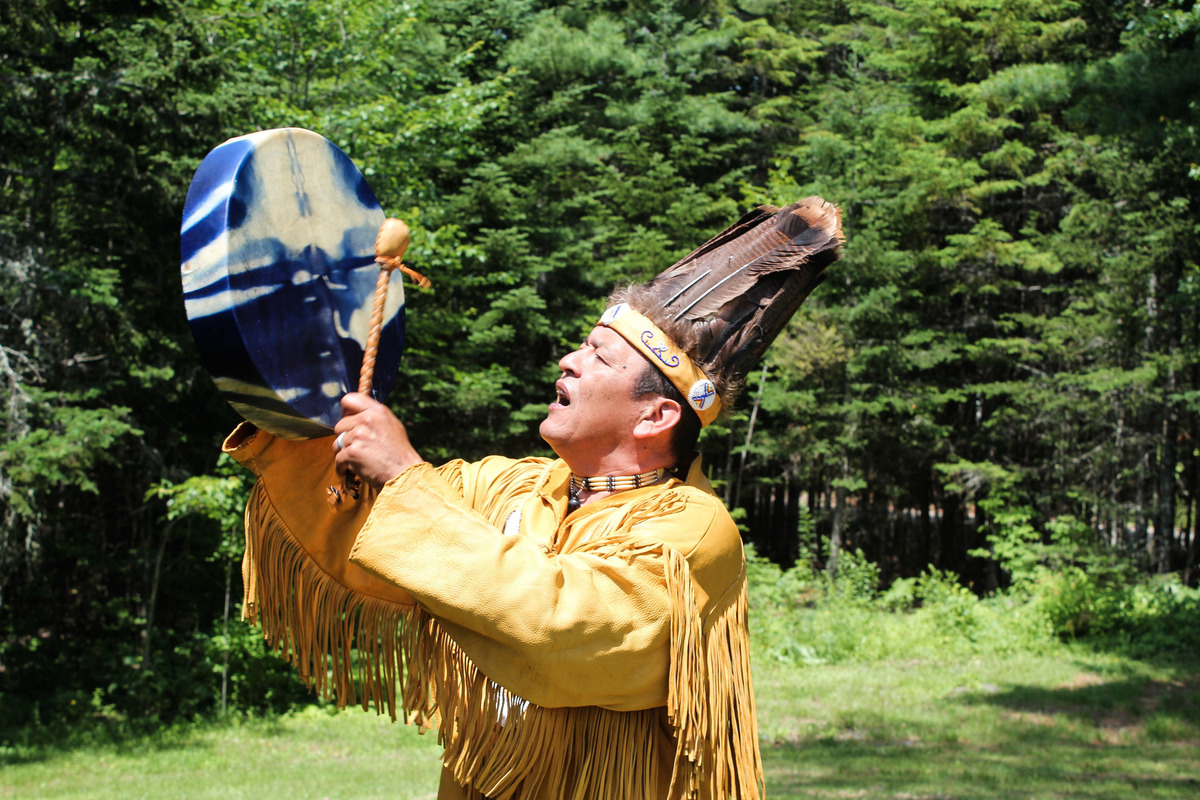 Dwayne Tomah, the youngest fluent Passamaquoddy speaker, sings a Passamaquoddy song outside of his home in Perry, Maine. Tomah is translating and interpreting songs and stories from wax cylinders recorded nearly 130 years ago.

Dwayne Tomah sits at his kitchen table in Perry, Maine, and pulls up an audio file on his computer. When he hits play, the speakers emit a cracked, slightly garbled recording. Through the white noise, Tomah scratches out the words he hears, rewinding every few seconds.

Word by word, Tomah is attempting to transcribe and interpret dozens of recordings of Passamaquoddy tribal members, some of which are only recently being heard and publicly shared for the first time in more than a century.

“I really, I wept. Hearing their voices. Knowing that I’m probably one of the last fluent speakers on the reservation,” Tomah says. “And that we’re still continuing this process, to be able to revitalize our language and bring it back to life again, so to speak. And give it some attention that it really deserves.” 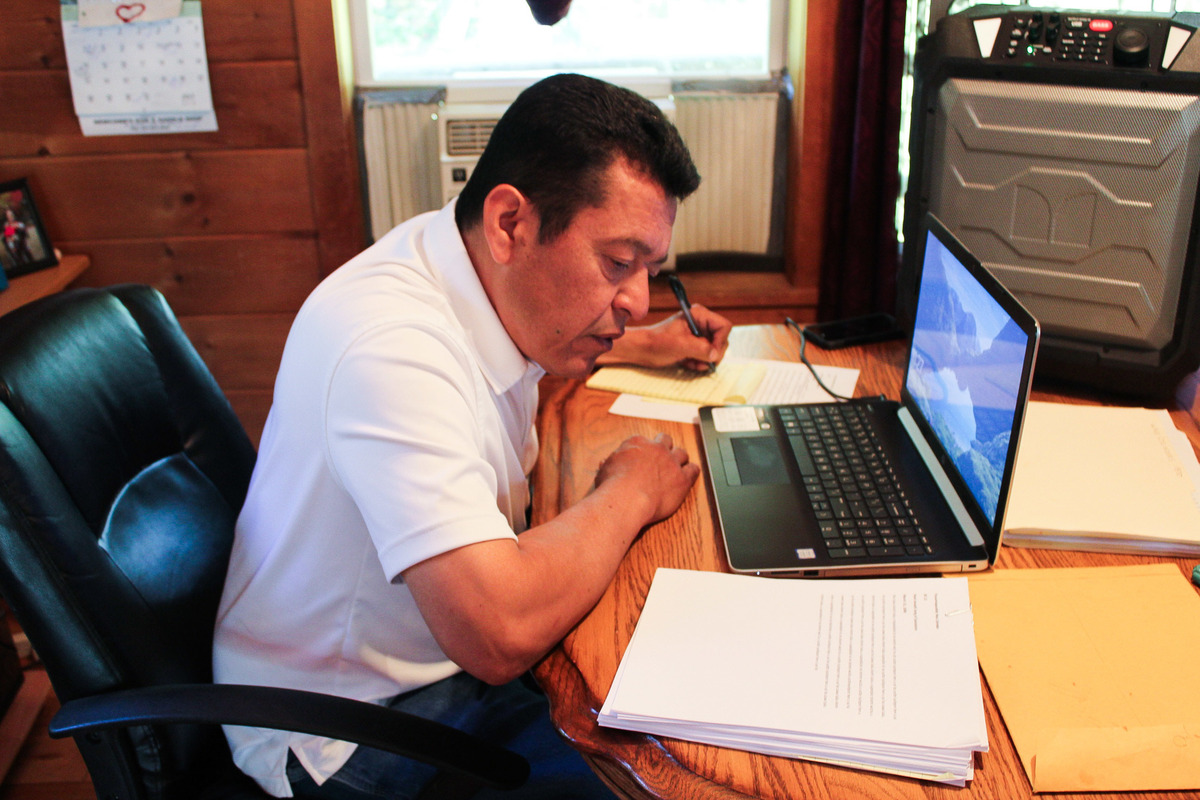 The story behind these recordings goes back to 1890, when an anthropologist named Walter Jesse Fewkes took a research trip to Calais, Maine. He borrowed an early audio recording device: a phonograph from Thomas Edison that recorded sounds on large, wax cylinders — about two-and-a-half to three minutes each.

“So this was the first time they took this big piece of equipment and modernized it so he could use it outside,” says Donald Soctomah, the Passmaquoddy Tribal Historic Preservation Officer.

In March of that year, Fewkes visited Calais, phonograph in hand, and met with three Passamaquoddy representatives.

“The three spokesmen for the tribe sang songs. Told stories. And did basic things like pronunciation of words and numbers and days,” Soctomah says.

In total, Fewkes recorded on to more than 30 cylinders. But for decades, the recordings were largely forgotten. Historians say Fewkes’ family likely held on to them for a time, and they eventually ended up at Boston’s Peabody Museum.

Tribal members didn’t hear the recordings again until the 1970s and 1980s, when the Library of Congress reached out to them as part of an effort to catalog thousands of the wax cylinders and share them with tribes. A Passamaquoddy tribal elder received a cassette of the 1890 recordings, but at that point, they were scratchy and difficult to understand.

Then, about a decade ago, a similar effort was attempted using digital technology. Guha Shankar, a folklife specialist at the Library’s American Folklife Center, says the 1890 Passamaquoddy recordings were some of the first that the library wanted to restore.

“Historically, they’re the oldest materials that we have in our archives,” Shankar says. In 2013, the agency began to meet with Soctomah.

“And then I told him that one of the things I’d like to do is develop a culturally based website where the tribe controls its stories. It’s language,” Soctomah says. “Without any outside forces trying to take it over or commercialize it.”

Traditionally, that’s been rare in the world of museums, says NYU Professor Jane Anderson, who worked with the tribe on the project. She says that only relatively recently have institutions begun to partner with communities like the Passamaquoddy to share cultural artifacts.

Over the next few years, the tribe agreed to partner with the library and other institutions on the project. The library would restore the recordings, and from there, the Passamaquoddy would decide the next steps.

“My heart was smiling” 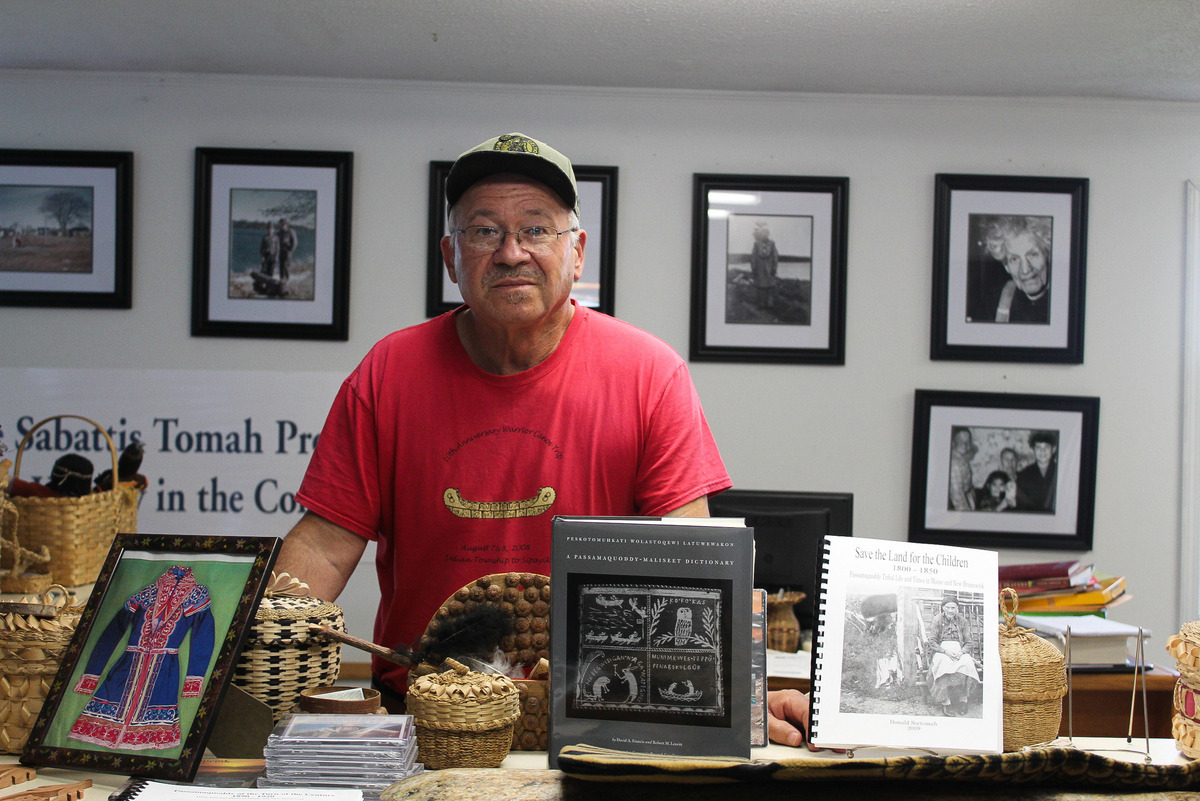 Since last year, the tribe’s youngest fluent Passamaquoddy speaker, Dwayne Tomah, has spent hours transcribing and interpreting each cylinder. He notes words and stories — even how the language has morphed over nearly 130 years. The work is then reviewed by a panel of other fluent Passamaquoddy speakers. Some pieces have been added to a curated digital website kept by the tribe.

After efforts to eradicate Native American culture and language, Tomah says this project is critical for passing Passamaquoddy culture to future generations.

“And I think that’s really what the goal is, really, is to influence the children,” he says. “Because they are really the key to passing this language on. And for them to continue it. So I think it needs to stem from them.”

While several cylinders have been reviewed, many are still being transcribed and interpreted. But already, the songs and stories have begun to weave their way back into tribal events. Tomah has sung several of them in public. His daughter also joined him for a song last year at an annual celebration.

The year before, tribal historic preservation officer Donald Soctomah played a song from the wax cylinder recordings to a group of young children at the tribe’s language immersion school. He says one of the teachers, who learned a version of the song from her grandmother, joined in. Then, a month later, Soctomah visited again.

“I said, ‘I’m going to play it again,'” Soctomah says. “And the teacher said, ‘No, you don’t have to play it. Just listen to the kids.’ Those kids around the table were singing that song. I said, ‘Wow.'”