In this March 28 photo, Indian Prime Minister Narendra Modi addresses a campaign rally in Meerut. One of his efforts as prime minister has been to construct millions of toilets to reduce open defecation. 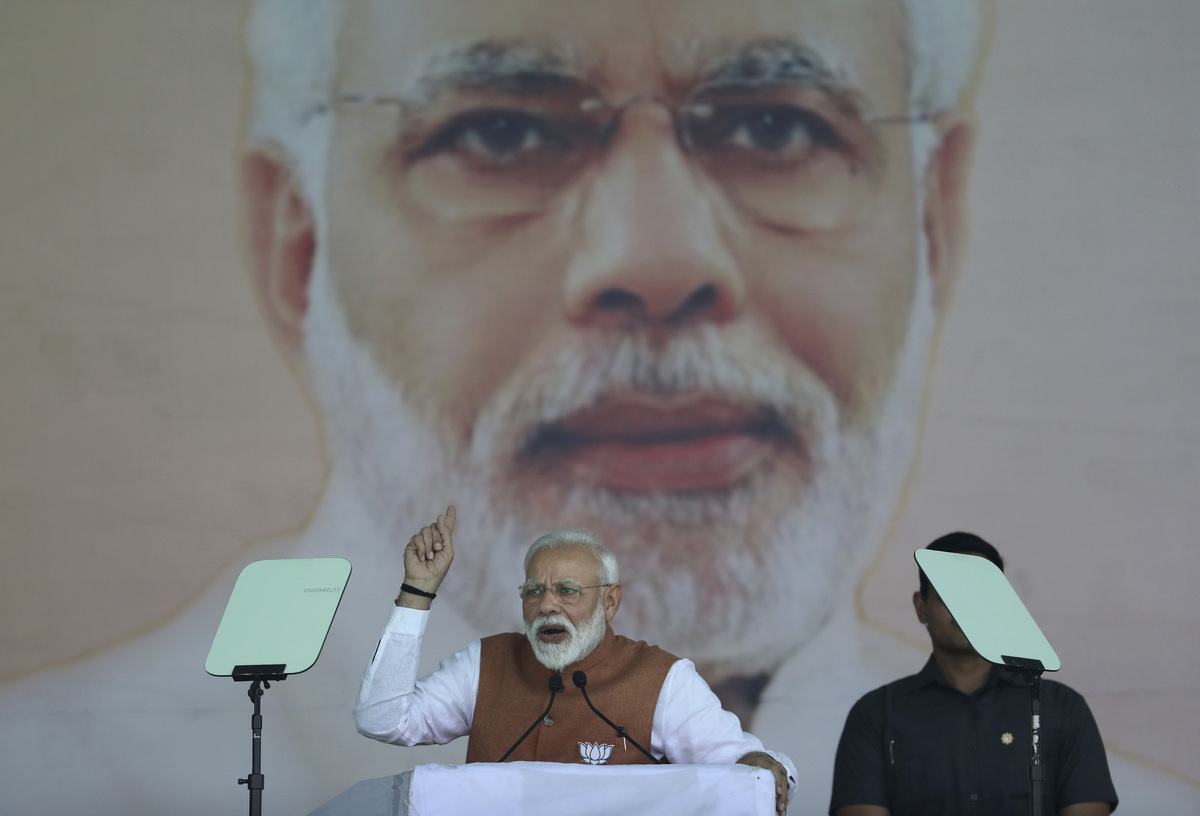 In this March 28 photo, Indian Prime Minister Narendra Modi addresses a campaign rally in Meerut. One of his efforts as prime minister has been to construct millions of toilets to reduce open defecation.

A protest is mounting over one of the recipients of the Bill Melinda Gates Foundation’s Global Goals Award, to be presented next week in New York City, as part of events surrounding the U.N. General Assembly. The award is given to individuals who have contributed to efforts to improve the lives of the poor.

The individual is India Prime Minister Narendra Modi, who is being cited for building toilets for millions of rural Indians as part of his Swachh Bharat Mission (Clean India Mission). His award was announced by an Indian government minister on Twitter earlier this month but the other recipients have not yet been made public.

Activists are calling for the Foundation to rescind the award because of Modi’s human rights record.

The protesters say that Modi’s government has created a humanitarian crisis in Kashmir, which has been under lockdown for six weeks. And Modi has long been criticized by human rights defenders for inciting violence against minorities, silencing dissent and undermining human rights.

On Tuesday, a dozen demonstrators with Stop Genocide, a project of the American human rights group Justice For All, marched to the Gates Foundation headquarters in Seattle. They delivered a petition with more than 100,000 signatures, many from people of South Asian descent. In addition, three Nobel Peace Prize winners — Shirin Ebadi, Tawakkol Abdel-Salam Karman and Mairead Maguire — co-signed a protest letter addressed to Bill and Melinda Gates last week.

The petition states that it is “inconsistent to give a humanitarian award to a man whose nickname is the ‘Butcher of Gujarat’ ” — a reference to the 2002 massacre in which more than 1,000 people were killed in anti-Muslim riots. At that time, Modi was Gujarat’s chief minister, and many hold him responsible for the violence.

In an op-ed for The Washington Post, lawyers and human rights activists Suchitra Vijayan and Arjun Singh Sethi warned of the danger of honoring Modi. “This award would legitimize his policies and embolden the ethnonationalist forces he has championed,” they wrote. “If the Gates Foundation really wants to amplify sanitation efforts in India, it should give the award to community workers instead of a far-right nationalist.”

But the Gates Foundation is planning to go ahead with the Modi honor. Asked to comment by NPR, the foundation provided this statement: “Prime Minister Narendra Modi is receiving an award at the Goalkeepers Global Goals Awards from the Bill Melinda Gates Foundation for the progress India is making in improving sanitation, as part of its drive toward achievement of the U.N. Sustainable Development Goals.” [Editor’s note: The Gates Foundation is a funder of NPR and this blog.]

Since 2014, Modi’s Clean India Mission has worked to eliminate open defecation and promote cleanliness and hygiene in rural areas. Those aims reflect the Sustainable Development Goals set by the United Nations, with 2030 as a target date. Open defecation is directly connected with the incidence of diarrheal diseases.

According to Clean India Mission’s website, the project has built over 10 million toilets.

“Before the Swachh Bharat mission, over 500 million people in India did not have access to safe sanitation, and now, the majority do,” wrote the Gates Foundation to NPR in a statement.

But Modi’s toilet campaign has also come in for criticism. A 2017 report from the U.N.’s Human Rights Office of the High Commissioner gave a mixed review. The report found instances of “some aggressive and abusive practices” from the authorities to coerce people to stop practicing open defecation. This includes revoking food ration cards, cutting off electricity services and publicly shaming or harassing people.

The report also noted that in some “open defecation free” certified areas, elderly people reported that they still practiced open defecation because they preferred it. And only 61% of schools in 2016 had available and usable girls’ toilets, even though the government reported that it had built separate toilets for girls and boys in every school from 2014 to 2015.

Indian government officials rejected the findings, saying they were “either factually incorrect, based on incomplete information or grossly misrepresent the situation.”

Despite the concerns raised by the U.N. report, Anit Mukherjee, a policy fellow at the Center for Global Development, a think tank in Washington, D.C., says that on the whole, the Clean India Mission has made great strides in tackling the country’s sanitation problem.

“To be very honest, this is the first time that I have seen some tangible change,” says Mukherjee, who has worked on social programs in India for the past 15 years, including efforts to improve access to toilets in schools. “It was absolutely abysmal, the state of sanitation in the rural areas and cities. [Clean India Mission] has turned sanitation into a national movement.”

Asked whether it is fair for the Gates Foundation to give the award to Modi because of his human rights record, Mukherjee says “it’s difficult to answer.”

“The Gates award is about his narrow work on sanitation. And Modi’s government has done more work to improve sanitation in India than any other government before. The government has achieved some measure of success,” he says. “I don’t see why not.”