‘Do Something!’: Calls For Action After Mass Shootings In El Paso And Dayton

Ohio Gov. Mike DeWine reacts as people in the crowd repeatedly shout “Do something!” during his speech at a vigil following the deadly mass shooting in Dayton. 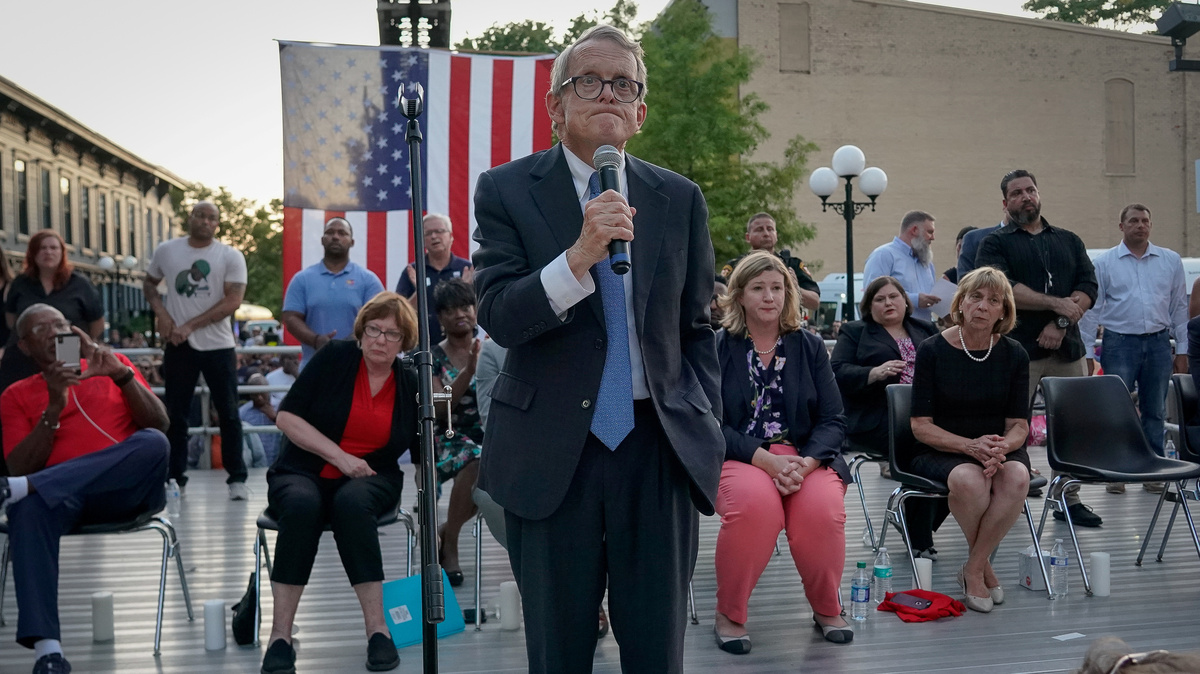 Ohio Gov. Mike DeWine reacts as people in the crowd repeatedly shout “Do something!” during his speech at a vigil following the deadly mass shooting in Dayton.

Dissatisfied with politicians’ offers of thoughts and prayers after more than 250 mass shootings so far this year, advocates for changing U.S. gun laws spoke out loudly on Sunday — many of them shouting a simple command to their public servants: “Do something!”

Ohio Gov. Mike DeWine heard it during a Sunday night vigil for victims of the mass shooting in Dayton. His speech was partly drowned out by many in the large crowd repeatedly shouting, “Do something!“

DeWine was also sharply criticized on Twitter, where he said that he and his wife, Fran, were “absolutely heartbroken over the horrible attack” and offered prayers to victims and their families of the Dayton attack, which happened less than 24 hours after a mass shooting in El Paso, Texas.

That sentiment was met with a sharp retort. Activist Kristin Mink replied, “The very first bill you signed into law was a ‘reaffirmation of the Second Amendment’ and your campaign was endorsed by the NRA so you can just f*** right off.”

Fran and I are absolutely heartbroken over the horrible attack that occurred this morning in Dayton. We join those across Ohio and this country in offering our prayers to victims and their families.

DeWine signed the measure in March, changing the state’s recent “Stand Your Ground” law — which included language that could have inadvertently banned shotguns and rifles such as the AR-15.

A call for action against gun violence also came at a pro soccer game in Washington, D.C. After the Philadelphia Union’s Alejandro Bedoya scored a goal, he ended his celebration by grabbing an on-field mic and shouting, “Hey Congress, do something. End gun violence now!”

Singer Kacey Musgraves turned to the subject of gun violence at her Lollapalooza performance Sunday evening, leading a crowd of thousands who shouted, “Somebody f***ing do something!”

“I don’t know what the answer is, but obviously something has to be f***ing done,” Musgraves said.

On Monday morning, the New York Post devoted its cover story to the gun issue. Directly addressing President Trump, the Post said, “America is scared and we need bold action.” It added, “It’s time to ban weapons of war.”

The U.S. once had a prohibition on assault weapons — but Congress allowed that 10-year ban to lapse in 2004, at the urging of the National Rifle Association and against the wishes of several national police organizations. That ban and other potential gun control measures are now back in the spotlight, after a weekend in which two gunmen shot and killed at least 31 people — nine in Dayton and 22 in El Paso, where police said Monday that two more people had died.

At a Monday morning news conference, Dayton Police Department Chief Richard Biehl was asked about the Dayton gunman’s use of a powerful firearm with a 100-round magazine, which allowed him to kill people quickly and indiscriminately.

“It’s problematic,” Biehl said. “It is fundamentally problematic to have that level of weaponry in a civilian environment, unregulated. It is problematic.”

The shootings prompted President Trump to address the nation Monday morning. In a brief speech from the White House, Trump called for better mental health treatment and involuntary confinement for people who pose a risk to their communities.

Trump also backed “red flag” laws that allow authorities to confiscate firearms from people deemed to be a threat to themselves or others.

“Mental illness and hatred pulls the trigger — not the gun,” Trump said.

Margo said he is good friends with Dayton Mayor Nan Whaley and that the two spoke on Sunday. “She had sent me condolences,” Margo said. “And I called her up and said, ‘Wait a minute. I need to offer you the same.’ “

As calls for action against gun violence spread, the Annals of Internal Medicine announced Monday, “There is something we can do.”

The journal pointed readers to a list compiled by the American College of Physicians and published last November of “common sense recommendations for preventing firearm injury and death in the U.S.”

The ACP has long urged policymakers to do more to prevent gun deaths and injuries, which it has deemed a public health crisis. Some of its past positions have been joined by a wide range of groups, from the American College of Surgeons and the American Psychiatric Association to the American Bar Association.

In response to a request from NPR, the International Association of Chiefs of Police shared its list of 19 policy steps that could cut gun violence, from limiting high-capacity ammunition magazines to opposing efforts to ease laws on silencers.

The IACP supports passing a new ban on “the production and sale of semi-automatic assault weapons” as well as a ban on mail-order sales of bulletproof vests and body armor.

“Gun violence is not a new issue — it is a continuing tragedy that destroys innocent lives, families and communities,” the IACP said.

“Enough! How many times do we have to keep saying it? This is a national emergency,” Brady President Kris Brown said after the Ohio shooting. He urged Senate Majority Leader Mitch McConnell, R-Ky., to call Congress back from recess for an emergency session to consider gun legislation.