President Trump speaks about the partial government shutdown, immigration and border security in the Diplomatic Reception Room of the White House Saturday. 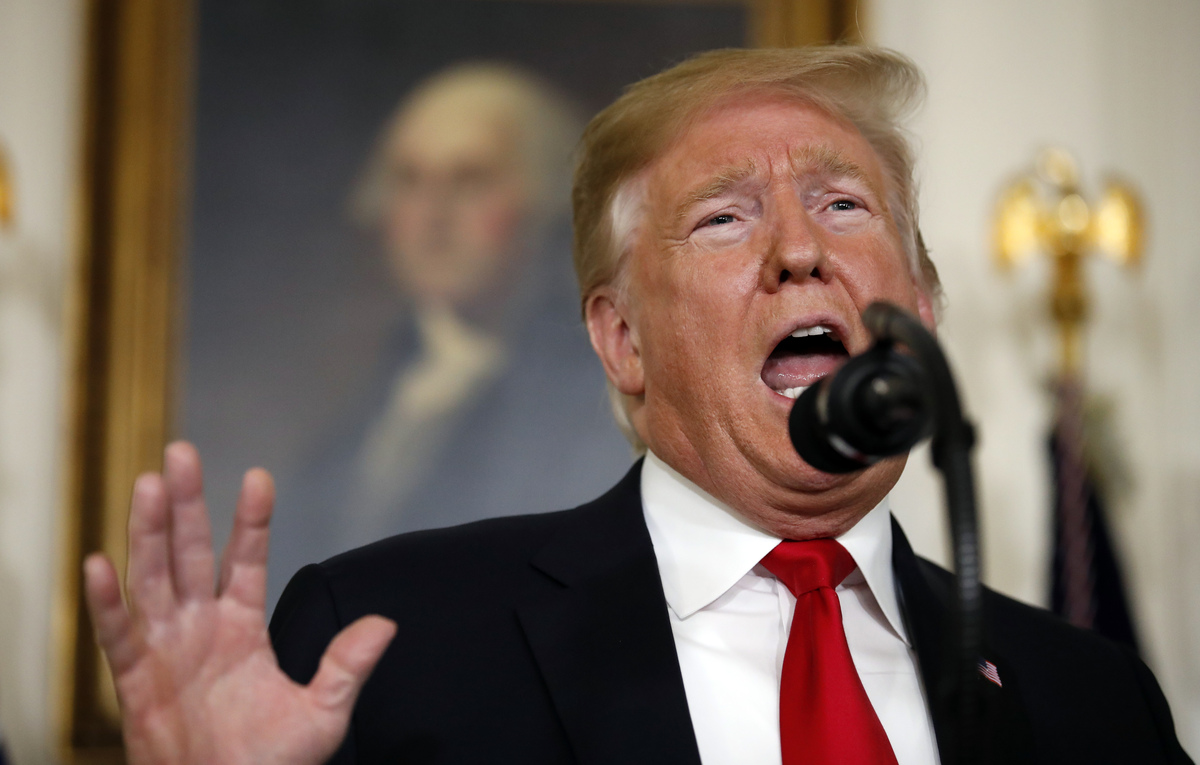 President Trump speaks about the partial government shutdown, immigration and border security in the Diplomatic Reception Room of the White House Saturday.

With negotiations over re-opening the government at a standstill, President Trump offered to back temporary protections for some immigrants brought to the country illegally as children, many of whom are now adults, in exchange for funding for a wall on the southern border.

The proposal had multiple components, including requests for:

The president said these measures would allow three more years of certainty to work on a larger immigration deal.

However, even before he spoke, the deal appeared to be dead on arrival with Democratic leaders. They insisted Trump needs to open the government before beginning any negotiations over border security or barrier funding.

Before the speech, House Speaker Nancy Pelosi, D-Calif, responded to initial reports of the president’s offer by calling it “a compilation of several previously rejected initiatives, each of which is unacceptable.” She added that Trump’s proposal does not “represent a good faith effort to restore certainty to people’s lives.”

Some 800,000 federal workers throughout the country have either been furloughed or made to work without pay. Workers have now missed one paycheck and will miss another if the shutdown is not resolved in the next week. Trump has signed legislation to give back pay to federal workers once the government is reopened.

“Everyone has made their point — now it’s time to make a law,” McConnell said in a statement shortly after the speech. “I intend to move to this legislation this week. With bipartisan cooperation, the Senate can send a bill to the House quickly so that they can take action as well. The situation for furloughed employees isn’t getting any brighter and the crisis at the border isn’t improved by show votes. But the president’s plan is a path toward addressing both issues quickly.”

This is the latest and most significant step yet of POTUS showing his willingness to negotiate and compromise with Democrats on the issue of wall funding. At this point, if Democrats refuse to come to the table, it will show they are not at all serious about solving this impasse.

But not everyone in the conservative base was happy with Trump’s proposal. Conservative commentator Ann Coulter called Trump’s move “amnestying millions of illegals.”

100 miles of border wall in exchange for amnestying millions of illegals. So if we grant citizenship to a BILLION foreigners, maybe we can finally get a full border wall.

During this longest partial government shutdown in U.S. history, Trump has suffered in the polls. Polls have found more people blame the president than congressional Democrats, and that number is on the rise. An NPR/PBS NewsHour/Marist poll also found Trump’s approval rating down to 39 percent and slipping with his base.

Coming out Saturday and making this speech was an attempt by the president to reclaim the narrative and appear conciliatory. Democrats indicate the president did not reach out to them before the speech and don’t see what he’s doing, as Pelosi noted, as a good-faith effort at compromise.

Trump’s offer is based, in part, on bipartisan legislation proposed by Sen. Lindsey Graham, R-S.C., and Dick Durbin, D-Ill., known as the BRIDGE Act. The bill would give three years of protections to the so-called “dreamers” — immigrants who came to the U.S. illegally as children. But before Trump’s speech, Durbin, a member of the Democratic leadership in the Senate, rejected Trump’s use of the bill in this way and called for the government first to be reopened before any negotiations on a border barrier could take place.

“First, President Trump and Senate Majority Leader McConnell must open the government today,” said Durbin, the minority whip in the Senate. “Second, I cannot support the proposed offer as reported and do not believe it can pass the Senate. Third, I am ready to sit down at any time after the government is opened and work to resolve all outstanding issues.”

This is the latest move by the White House in the midst of its showdown with Democrats, who have balked at providing the money for construction of a border wall. Democrats contend that Trump’s push for the wall is immoral and that it is an ineffective way to stop illegal crossings.

Trump argues a wall is necessary for national security. He has refused to sign any spending bill without the funding. Back in December, the president indicated he would sign temporary funding measures to keep the government open, but then faced a backlash in conservative media over it. He reversed course, which led to the shutdown.

Until now, the White House had said it would be open to negotiating on the amount of money it will accept for a wall, but has been noncommittal about offering other concessions to Democrats.

Almost a year ago, Democrats offered some $25 billion in exchange for a path to citizenship for those almost 700,000 DACA recipients. Democrats say Trump balked at the offer, demanding more after Democrats thought they had a deal.

Democrats have passed several bills out of the House to fund and reopen agencies that are currently shutdown. McConnell has not brought them to the floor of the Senate, deferring instead to the need for negotiations between Trump and Democrats.