Could This Tree Be An Eco-Friendly Way To Wean Indonesian Farmers Off Palm Oil?

In the forests near the southern Sumatran village of Krui, 48-year-old Marhana climbs up the trees to harvest damar, a resin used in paints and varnishes. These damar trees are part of something called an “agroforest,” which experts see as a way to prevent deforestation and conversion of forests into palm oil plantations. 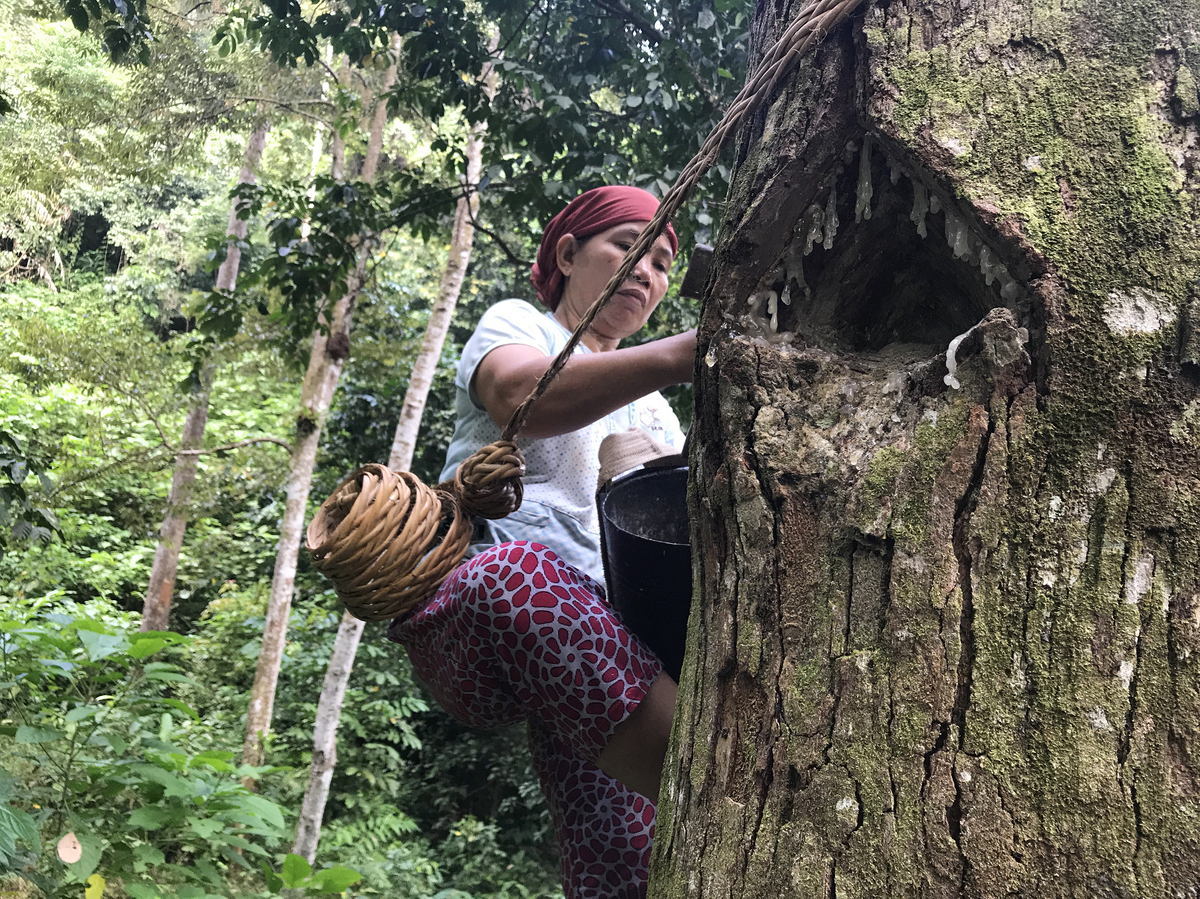 In the forests near the southern Sumatran village of Krui, 48-year-old Marhana climbs up the trees to harvest damar, a resin used in paints and varnishes. These damar trees are part of something called an “agroforest,” which experts see as a way to prevent deforestation and conversion of forests into palm oil plantations.

A few times a month, Marhana leaves the village of Krui in southern Sumatra and journeys deep into the woods. Then she finds a tree, lined with triangular holes, each hole dripping with crystalized sap.

Marhana (like many Indonesians, she uses only a first name) takes a woven rattan rope and lassos up the tree, climbing higher and higher, chipping away at the sap using a tiny pickaxe.

“This is the damar,” she says in Indonesian, as she looks at the golden droppings.

Marhana may see damar as her way to make a living, but agriculture experts see this rare commodity as something bigger. They see damar as a sort of anti-palm oil — a model to combat deforestation and climate change.

Damar isn’t a global household-name, but in Sumatra it goes way back. In the 1800s, Dutch colonists used the sap to bind their wood boats for sea journeys. Today damar is used in varnishes, paints, and cosmetics. According to the UN, Indonesia exports tens of thousands of tons of damar and other resins each year.

But compared to Indonesia’s monthly exports of palm oil, that’s not so whopping. According to the Indonesian Palm Oil Organization, or GAPKI, Indonesia exports about 2 to 3 million tons of palm oil per month.

And those palm oil exports come at a cost: large-scale deforestation of Indonesian forest, which in turn releases large amounts of climate change gases and destroys habitats for animals like endangered rhinos and orangutans. Last year, the Indonesian government stopped issuing licenses for new palm oil plantations and the European Union is now considering an import ban.

But there’s an issue.

Last month Thomas Hertel, a professor of agricultural economics at Purdue University, co-authored a paper in the Proceedings of the National Academy of Sciences. He argued that even if the EU ban comes to pass, and even if it successfully reduces the trade of palm oil, local farmers aren’t just going to automatically keep the forests in place.

“Even if the import ban bites, it may not do the job,” Hertel says.

Hertel says that farmers might stop planting palm oil, but they might keep cutting down forests to plant other commodities, like soy or rice. “If you focus on certifying one crop, they switch to another crop. The incentive for deforestation will still be there,” Hertel says.

That’s where damar comes in. Back in Krui, farmer Kamas Usman says he grows damar in something called an agroforest. It may look like a regular forest, but it’s actually an intricately planned farm.

“In this agroforest there are lots of varieties of trees. Durian, jengkol, lots of them,” Usman says. The farmers plant food crops below — Southeast Asian fruits like durian and jengkol, as well as avocados or coffee. Above in the canopy are the damar trees — also called Shorea javanica — which produce the golden sap. “That’s how it becomes not just a forest, but a damar forest,” he says.

David Gilbert, a researcher at the University of California, Berkeley, says the agroforestry model adds value that’s key to the forest’s survival. First there’s the water benefits: Having your farm in the middle of a forest with natural watersheds and rain cycles is a win for crops’ health.

And then there’s the business side — all these crops growing together means forest farmers like Usman and harvesters like Marhana have lots of economic incentives not to cut down their trees.

Gilbert says whereas palm oil is a monocrop — just rows and rows of the same palm trees — with damar agroforests, farmers aren’t reliant on a single product. “If the damar price is too low, they can concentrate on selling their coffee or their avocados, for example,” Gilbert says, “So it insulates them from the shocks of these global commodity markets in a way that producing just one crop can’t provide.”

The forest where Marhana harvests damar in South Sumatra is pretty much Indonesia’s poster child for the strength of agroforests versus deforestation. In the 1990s, when the palm oil industry came in and tried to persuade locals to cut down their damar trees, it didn’t work. The majority of farmers stuck with damar. Around this time, Indonesia’s forestry minister decided to formally grant the community ownership of several thousand hectares of woods.

Now the Indonesian government is in the middle of a plan to increase Indonesia’s community-owned forest lands to 12.7 million hectares. And the Indonesian Ministry of Social Forestry is also working on community agroforestry projects on other islands besides Sumatra, including Java, Kalimantan and Sulawesi.

As for Marhana, she says the agroforestry model works for her, providing her whole livelihood — just like it did for her mother and her grandmother. And at 48 years old, she has no plans to quit climbing damar trees anytime soon.

Julia Simon is a regular contributor to NPR’s Planet Money. You can also hear her on the NPR business desk and the NPR podcasts Code Switch and Rough Translation.