Emergency crews work at the scene of a construction crane collapse on Saturday in Seattle. Four people were killed. 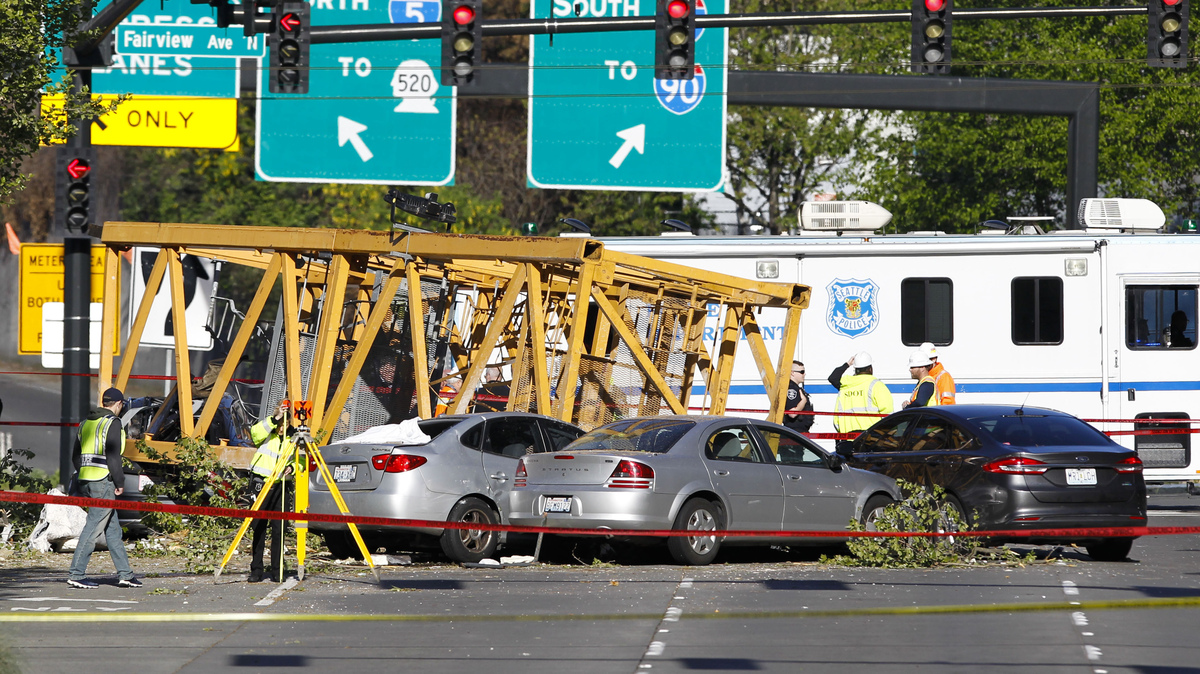 Emergency crews work at the scene of a construction crane collapse on Saturday in Seattle. Four people were killed.

A construction crane fell from the roof of a Seattle building Saturday afternoon, killing four people and injuring four others.

The crane damaged six cars. Two of the people killed were ironworkers in the crane and two others were in separate vehicles, Seattle’s Fire Department said. Three of those killed were men and one was a woman. Their names have not yet been released.

Fire officials said four people were evaluated by medics, three of whom were taken to Harborview Medical Center with injuries that were not life-threatening: a 27-year-old man, a 25-year-old woman and a 4-month-old girl.

The 25-year-old woman was the mother of the girl, whose car was hit but both survived in what Seattle Mayor Jenny A. Durkan called one of “some miracles.”

The three patients who went to the hospital are “all going to be okay,” the University of Washington’s medical newsroom said. The mother and baby were discharged late Saturday, according to The Seattle Times, while the man “remains in satisfactory condition,” the hospital said.

The Washington State Department of Labor and Industries will investigate how the crane collapsed, the fire department said.

Witnesses spoke of strong winds at the time of the crane collapse, though the National Weather Service tweeted that it “would not consider” nearby reported gusts of 18 and 23 mph around the same time to be strong.

“It was terrifying,” witness Esther Nelson, who was working nearby, told the Times. She guessed the crane was eight or nine stories tall and said it broke in half. “Half of it was flying down sideways on the building,” she told the newspaper. “The other half fell down on the street, crossing both lanes of traffic.”

Construction has been a constant in Seattle for years, with more cranes building apartments and offices — about 60 — than in any other U.S. city, according to The Associated Press.

The last time a person died in a crane accident in the area was in 2006 in nearby Bellevue, when a crane fell and killed a Microsoft attorney in his home. In response, Washington state passed what the Times describes as “one of the nation’s strictest crane safety laws, which required state testing of the machinery, as well as enhanced crane operator certification and training starting in 2010.”

“Determining how and why this tragedy happened will take time,” Mayor Durkan said in a statement. “The City of Seattle, including the Seattle Police Department, will continue to work with the Washington State Department of Labor Industries so they can complete a thorough investigation into the causes of this incident. SDOT will also ensure any road repairs are complete.”