Chance The Snapper Is Snared: Alligator Caught After A Wild Week In Chicago Park

An alligator that eluded capture for a week in a Chicago park is now in custody, officials announced Tuesday. The gator is seen here in an image provided by Chicago Animal Care and Control. 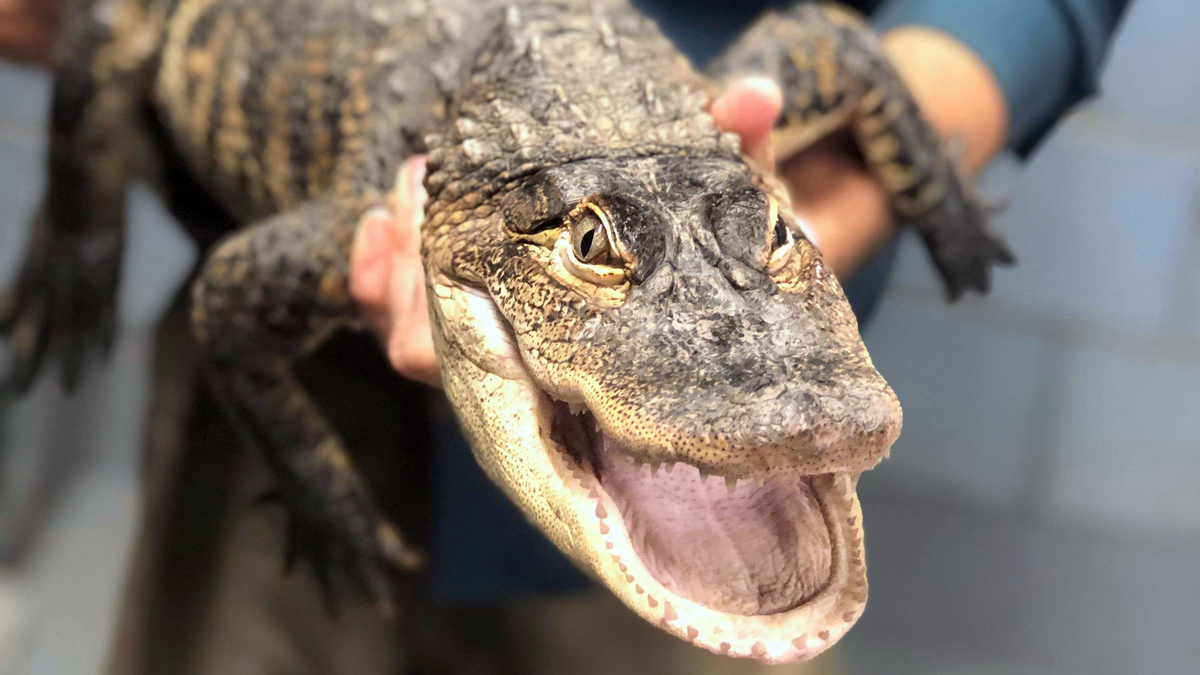 An alligator that eluded capture for a week in a Chicago park is now in custody, officials announced Tuesday. The gator is seen here in an image provided by Chicago Animal Care and Control.

It took a week, but wildlife officials in Chicago say they’ve finally captured a 5-foot-long alligator that was nicknamed Chance the Snapper. The gator surprised city residents who spotted it last Tuesday in Humboldt Park, on the city’s West Side.

The animal was captured after 36 consecutive hours of tracking and surveillance by Florida alligator expert Frank Robb, who owns Crocodilian Specialist Services in St. Augustine. To help the gator search, officials had closed off roads and paths near the lagoon, and residents were asked to avoid the park and keep things quiet.

The rogue alligator fell into human hands around 1:30 a.m. local time Tuesday. That’s when Robb says he saw the gator’s eyes shine in the darkness. That’s when the gator — a male that weighs around 30 or 40 pounds — did some “vocalizing,” Robb said at a news conference where the slippery gator was unveiled Tuesday.

When a reporter asked Robb to make the vocalizing sound, he replied, “That’s a trade secret, buddy — sorry.”

After moving into position on the shore, Robb caught the gator with a fishing rod — the hook snagged the base of the animal’s tail on the first try.

“One cast and done,” Robb said.

The fishing line had a 200-pound test strength. But Robb said the hook was set so loosely that it fell out when he grabbed the gator.

Robb said that when people ask, “How do you catch an alligator?” his answer is always the same: “Just barely.”

When he was asked how he had managed to bring in an animal that eluded dozens of others, Robb replied, “Everybody’s got different blessings. This is my blessing. This is what I’ve spent every day of my life doing for the past 24 years.”

It took Robb roughly eight trips around the lagoon before he got a glimpse of the alligator.

“This was an amazing capture by Mr. Robb,” said Kelley Gandurski, executive director of Chicago Animal Care and Control.

Gandurski said the alligator was found in the northwest side of the lagoon, where “the gator was kind of hiding in the lily pads.”

At the end of the news conference, Robb pulled the gator out of a large bucket and displayed it to the audience. While the assembled crowd murmured when the alligator initially thrashed around, more than a few simply said “Awww” as the animal settled down and Robb showed it off.

“It is a beautiful, beautiful alligator,” Gandurski said, adding that it is “very healthy.”

Noting Chicago’s reputation as the City of Big Shoulders, Gandurski said it’s also a city of big hearts. The alligator brought residents together, she said, as the idea of a gator in their city captured imaginations. The website Block Club Chicago held a contest to name the animal — Chance the Snapper won out over competing entries such as Croc Obama, Frank Lloyd Bite and Ruth Gator Ginsburg.

So many spectators flocked to the park for a chance to see Chicago’s wild alligator that officials erected a safety fence to create a barrier between the reptile and its curious public. Animal advocates also urged officials not to harm the alligator.

But Gandurski warned any Chicago residents against trying to get a gator of their own.

“Alligators do not make good pets,” she said. “They’re wild for a reason.”