A youth stands by the border fence that separates Mexico from the U.S. Sunday, where candles and crosses stand in memory of the father and daughter who died during their journey toward the U.S. 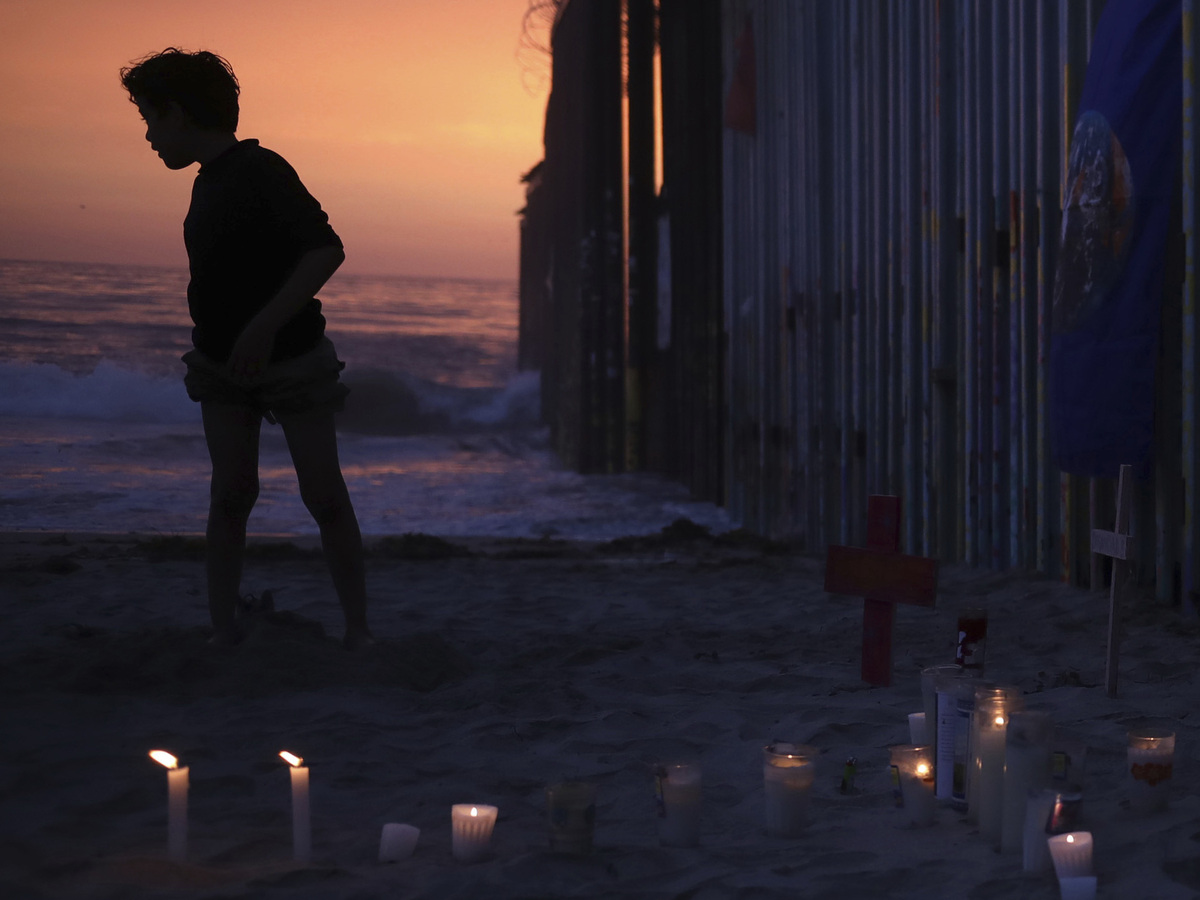 A youth stands by the border fence that separates Mexico from the U.S. Sunday, where candles and crosses stand in memory of the father and daughter who died during their journey toward the U.S.

Residents in the Rio Grande Valley gathered at vigils in McAllen and Brownsville, Texas on Sunday evening to remember the lives of Oscar Alberto Martinez Ramirez and his 23-month-old daughter, Angie Valeria.

The Salvadoran father and daughter drowned as they tried to cross the river between Matamoros and Brownsville last Sunday. Valeria’s mother, Tania Vanessa Avalos, watched as her family was swept away.

Julia Le Duc, a journalist working for La Jornada, took a photo that showed Ramirez and his daughter face down by the riverbank. The child was tucked into her father’s shirt, her arm still around his neck. The image went viral and shed light on restrictive U.S. government policies like metering that have pushed some desperate migrants to risk crossing the river between ports of entry.

The vigil at Brownsville’s Hope Park was only about a mile from where the bodies were found.

Photos of the Salvadoran family rested on a table. People held signs and others held candles that were lit during the vigil.

Joyce Hamilton, a member of the group Angry Tias and Abuelas, spoke to the crowd. “On the way here tonight,” she said, “all I could think is that there’s no way I could talk tonight because this whole past week or so has been just so crushing.”

Organizations like Angry Tias and Abuelas regularly help migrants in Mexico and in the U.S. They worked with other groups to organize the vigils.

Gabriela Zavala, the executive director of a respite center at a local church, took a turn speaking at the vigil.

“We only know a few things about them,” she said, “but we do know this. We know that they, like many immigrants before them and many immigrants after them, made the ultimate sacrifice to leave their counties behind to brave a dangerous trek in search of safety and a better life.”

Zavala says their deaths were the result of a failed immigration system and called on the community to demand from their elected officials better representation for the needs of all at the border.

“Demand that they end family separation and detention, and that they hold our leaders accountable for terrible policymaking,” said Zavala. “Policies like metering that keeps our asylum seekers waiting in Mexico, despite the knowledge that they undergo very bad treatment and that the conditions are terrible.”

At a migrant camp in Matamoros, just across the river from Brownsville, a Honduran woman named Xiomara said she remembered meeting Ramirez and his daughter Valeria only hours before their deaths. She said she also met the toddlers mother, Avalos.

Xiomara said she wanted to use only her first name because she feared speaking out might hurt her family’s asylum claim.

Her family is on a list managed by Mexican officials, who coordinate with U.S. Customs and Border Protection. Only a few migrants, if any, are allowed into the U.S. during any given week. A process referred to as metering. According to a report from the Office of the Inspector General, it likely convinces migrants to cross the river between ports of entry rather than endure the delay.

“They came here Saturday afternoon and asked me for information about the infamous list,” explained Xiomara, “and I told them they needed to return Monday morning. … They told me they were surprised when I told them I’ve been here for more than two months.”

Xiomara said the family asked her if she had ever thought about crossing the river. She told them no. She said Ramirez then told her they would return on Monday so that they could be added to the list.

The next day, two Peruvians who waited in line for more than three weeks informed her that Ramirez and Valeria had drowned.

“They told me they saw a woman crying when her child was drowning. They got here scared and told me a man and little girl drowned,” Xiomara said. “I never thought it would be Oscar or the little girl.”

The Peruvian man, who did not want his name used because he feared speaking out might hurt his asylum claim, said he saw a group of people by the river. When he moved closer, he recognized Avalos, Ramirez’s wife.

“She was crying uncontrollably saying they had come to the U.S. for help,” the Peruvian man said.

The bodies of Ramirez and his daughter were found a day after they drowned, last Monday.

Xiomara said Valeria’s smile was luminous and she thought Valeria’s parents were a beautiful couple. Ramirez was 25, and Avalos is 21.

She shared her memories from her camp near the international bridge. As she spoke, children chased each other, a man slept on a thin foam mattress and others chatted and endured the summer heat.

Xiomara and her family are now number 3 on the metering list, but she estimated they would be in Mexico for at least another two weeks until they’re finally allowed into the U.S. to be processed at a facility in the other side of the border. She said it hasn’t been easy for her family because they have to spend their days under the hot sun, and they don’t have water, showers or bathrooms.

She says that once she makes it across to the U.S., and if her asylum claim is successful, she’ll head to the East Coast where she has family. She added that she will seek medical treatment for her daughter who suffers from a tumor and seizures.

Another woman at the camp sat under the roof of a building for shade. The woman came from Cuba with her husband and daughter. She said she is five months pregnant and has been waiting to be allowed into the U.S. for about 17 days. She said she didn’t realize she’d have to wait for so long, admitting she has considered crossing the river.

“I was thinking about it before this incident occurred,” she said — referring to Ramirez and Valeria — “I haven’t checked if everything is okay with my baby. Having a one-and-a-half year old kid also makes me very anxious because I don’t see the line moving.”

At Sunday’s vigil, Zavala’s rallying cry resounded among those in the crowd.

“And something else that helps me get through this, this tragedy that the deaths of Oscar and Valeria will not go in vain,” said Zavala.