Australian student Alek Sigley gestures as he arrives at the airport in Beijing on Thursday. The 29-year-old vanished in Pyongyang more than a week ago. 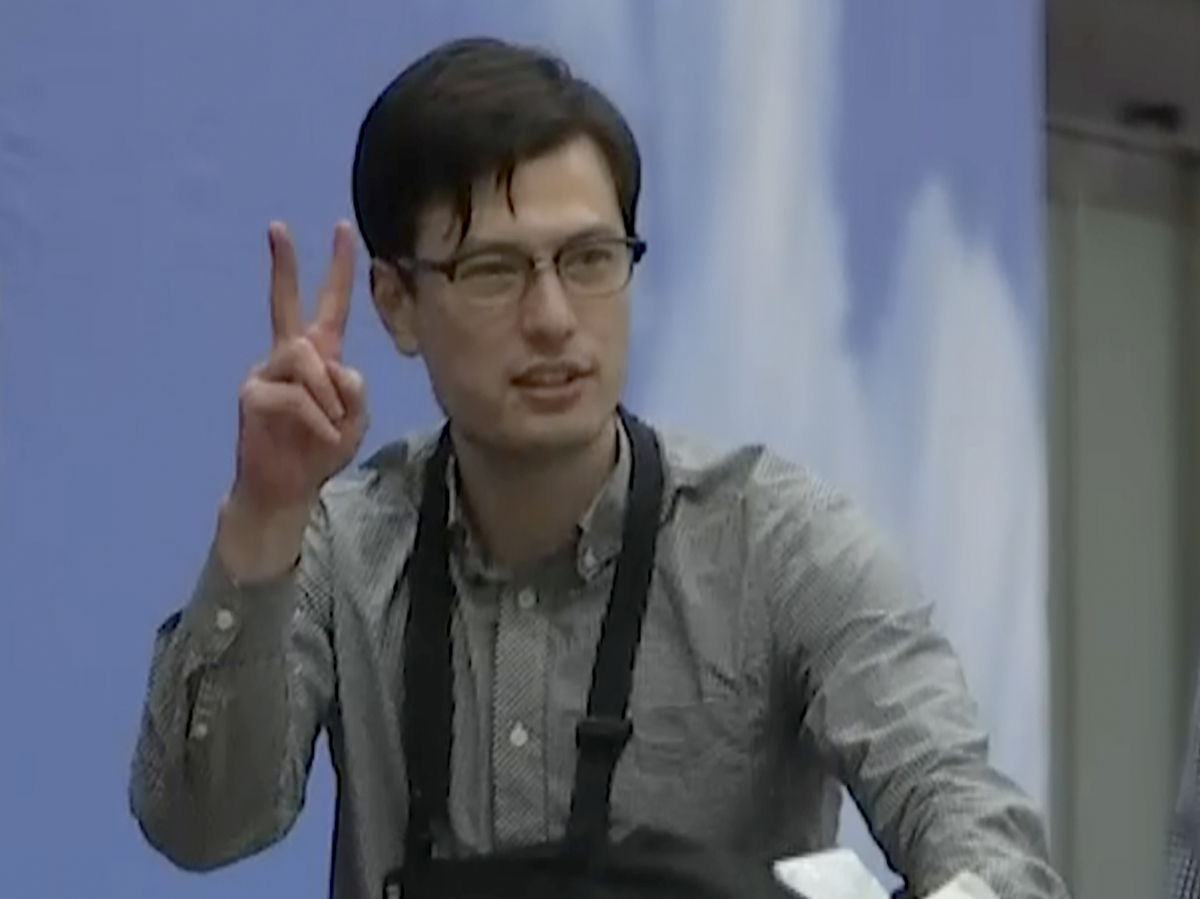 Australian student Alek Sigley gestures as he arrives at the airport in Beijing on Thursday. The 29-year-old vanished in Pyongyang more than a week ago.

The Australian student who was reported missing more than a week ago has been freed from detention in North Korea and has arrived safe and well in China.

Alek Sigley smiled at reporters upon arriving at the airport in Beijing Thursday, telling them he felt “great.”

But the 29-year-old, who is a graduate student at Kim Il-sung University in Pyongyang, declined to elaborate on the details of his detention since he was first reported missing by friends on June 25. The North Korean government has not issued any explanation.

When asked by reporters to explain what happened, Sigley replied, “Uh…,” then trailed off.

Australian Prime Minister Scott Morrison was the first to confirm Sigley had been held in detention in an address to parliament Thursday afternoon. Morrison added that Swedish authorities played a key role in securing Sigley’s release.

Australia has no formal diplomatic presence in North Korea and relies on other Western countries to act on its behalf.

“We were advised that the DPRK have released him from detention and he has safely left the country, and I can confirm that he has arrived safely. … Alek is safe and well,” he continued.

Morrison extended deep “gratitude to the Swedish authorities for their invaluable assistance in securing Alek’s prompt release, which demonstrates the value of discrete behind-the-scenes work by officials in solving sensitive consular cases in close partnership with other governments.”

Sigley’s father, Gary Sigley, said he was “over the moon” after speaking with his son.

“I just spoke to Alek and he’s in good spirits and he’s looking forward to seeing his wife as soon as possible,” he told Australia’s ABC.

Alek Sigley is believed to have been the only Australian living in the communist country and among a small group of foreign students at the prestigious university, where he majored in Korean literature. Sigley often wrote about his experiences living in the country on his blog and for NK News.

He also maintained a prolific Twitter account — an anomaly in North Korea, where the social media platform is officially banned and strict censorship laws control the flow of information, including limiting access to the Internet.

His account offers a rare glimpse into an authoritarian and closed-off society. He posted about food and the curious array of knock-off Western products available in North Korea’s burgeoning economy. The posts do not veer into the political.

In an interview with PRI’s The World in February, Sigley said he enjoyed special perks as a student at the Pyongyang university.

“Basically, in Pyongyang, you can go anywhere you like,” he said. “We can take the subway. We can take taxis without guides or interpreters — which is unique to foreign students. The diplomats, they have a similar degree of access within Pyongyang but, if they want to get on the subway, they’re supposed to have a Korean interpreter.”

Though he added, “Foreigners can also use the Internet [provided they have access to foreign websites].”

Sigley was also permitted to set up a business. For the last five years, he has operated Tongil Tours, a company that brought tourists to Pyongyang and the DMZ.