High school students march in central Algiers. The protesters are speaking out against President Abdelaziz Bouteflika’s candidacy for a fifth term in next month’s presidential election. 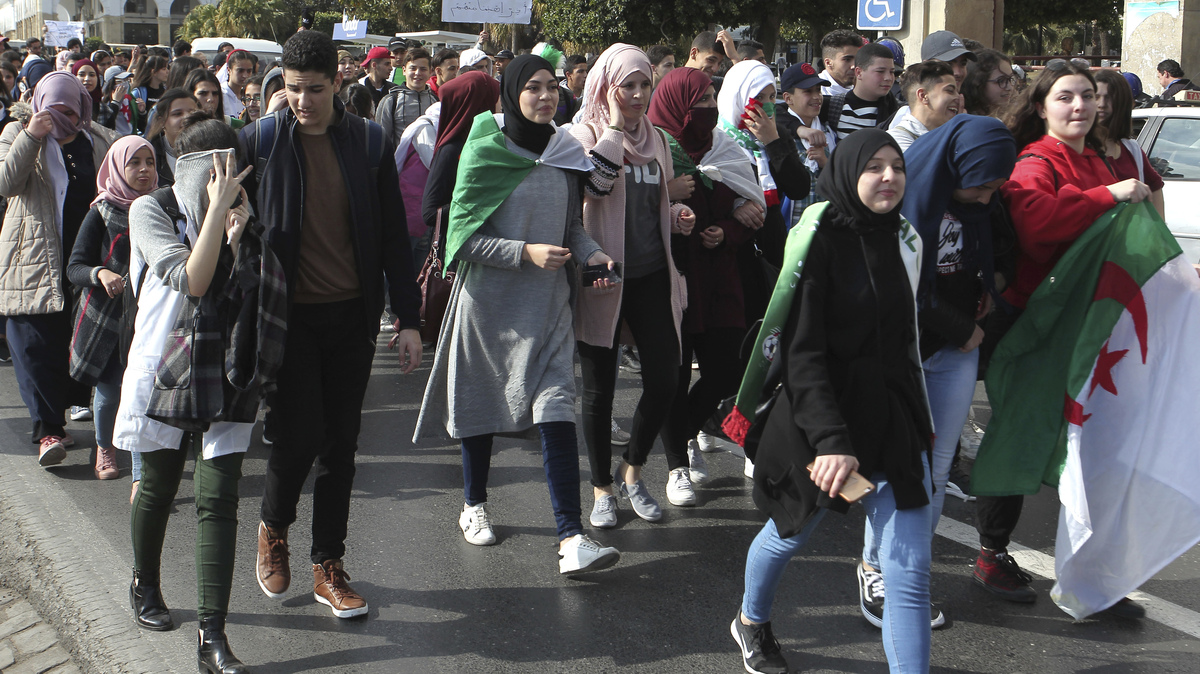 High school students march in central Algiers. The protesters are speaking out against President Abdelaziz Bouteflika’s candidacy for a fifth term in next month’s presidential election.

An Algerian government plane believed to be returning Algeria’s president, Abdelaziz Bouteflika, home from Switzerland has landed at Boufarik military airport, southwest of the capital, Algiers, as demonstrators have turned out to protest his quest for a fifth term in office.

Bouteflika had been receiving medical treatment in Switzerland since Feb. 24. Two days earlier, protests had begun, demanding that the now-82-year-old leader not seek re-election next month.

Many protesters say the ailing president, who suffered a stroke in 2013, is a puppet leader used by a small group of civilian and military figures to rule the country. As The New York Times noted, Bouteflika has not publicly addressed the country in seven years. “Barely able to talk because of his stroke, he is represented at government rallies by his framed portrait, known as ‘The Frame.’ ”

Algeria’s stagnant economy has added to the discontent, driving young Algerians into the streets.

The protests have come to represent one of the most significant threats to Bouteflika’s hold on power since he first won the presidency in 1999. Algerian state television reported that the military and the people have a united vision of the future, an indication that military generals may be siding with the thousands of protesters filling Algeria’s streets, Reuters reported.

Bouteflika’s political party, the National Liberation Front, or FLN, has also released a statement praising the protest movement and saying it’s ready to work with all parties to find a way out of the crisis “with the least cost to the country,” The Associated Press reported.

Students have led many of the demonstrations against Bouteflika. On Saturday, Algeria announced it would close the country’s universities two weeks before a scheduled holiday in a bid to defuse the unrest. On Sunday, protesters took to the streets of Algiers chanting, “Bouteflika, there will be no fifth term.”

Bouteflika has survived mass protests before. He managed to stay in power through the Arab Spring demonstrations that swept through neighboring countries in 2011. Memories of Algeria’s decade-long civil war, which killed more than 200,000 people, have helped Bouteflika and his party stay in power.

Many demonstrators now demanding that Bouteflika step down were not alive during the civil war and have no memories of its chaos or violence. Social media has also helped Algeria’s youth rapidly mobilize in cities across the country over the past two weeks. Meanwhile, protesters in Paris, Marseille and other French cities, home to an Algerian diaspora, have taken to the streets in solidarity.

Observers will be watching Algeria’s Constitutional Council on March 13, when it is due to determine the legitimacy of candidates for next month’s presidential election.