After Years In Refugee Camps, A Family Celebrates Its First Christmas In The U.S. 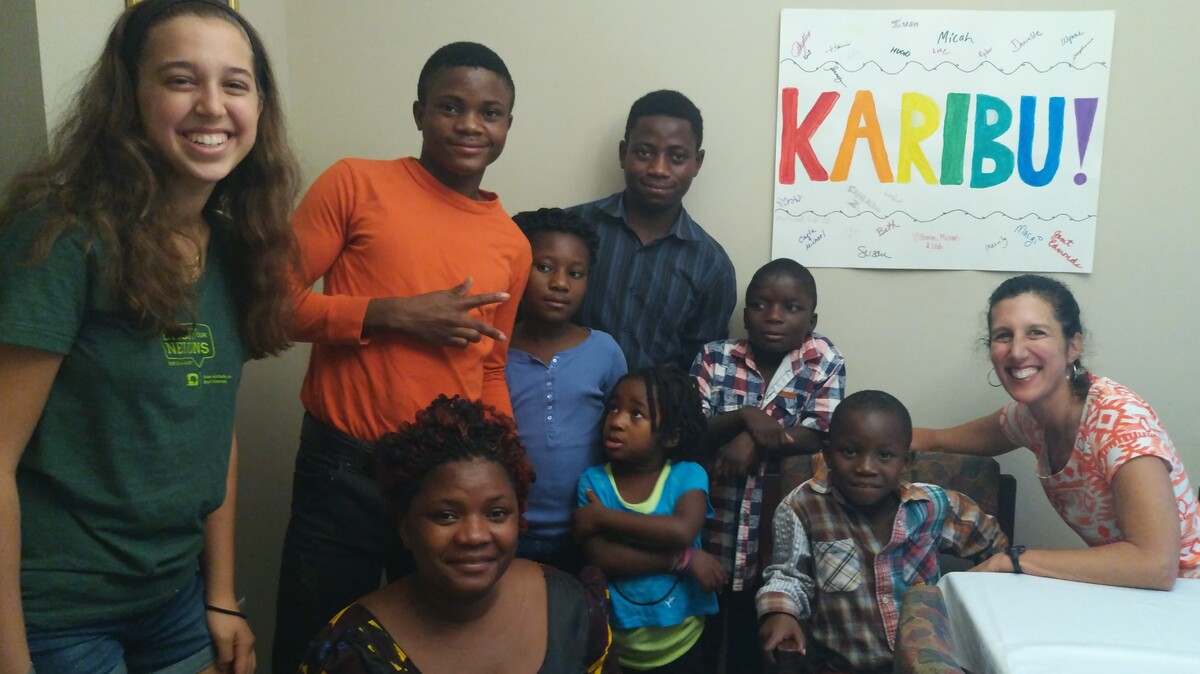 It’s a familiar scene: a family gathering on a Sunday afternoon, the kids off playing somewhere in the house. But in the kitchen, conversations in Swahili fill the room.

Cecil Furaha, 30, uses a rolling pin as a pestle to crush ginger for her version of pilau, a popular rice dish. She is joined by Sharon Fine, one of the first people she met when she arrived in America.

Furaha, her husband Saidi Roger, 33, and their seven kids have been in the U.S. for three months. Their home in Silver Spring, Md., is a cozy three-story condo at the end of a cul-de-sac. The inside is fully furnished with donations from volunteers. A homemade sign with the word “karibu” hangs prominently on the wall at the end of their dinner table. It means “welcome” in Swahili.

Furaha says she feels safe here. But life was not always that way.

Back in the Democratic Republic of the Congo, she faced constant threats from warring ethnic factions. She was 7 years old when her parents died in the wars.

Through an interpreter, Furaha describes a scene she saw at a marketplace. Soldiers had called a meeting. Then, they shut the doors.

“They killed, they cut people up. There was a small child, and they hit him hard on the head and his head burst open,” Furaha said, her eyes watering. “I don’t have the math to explain how many people died, there’s just too many to count, too many.”

She says the last straw was when Roger’s father died. He had been hit in the neck by a machete.

That moment led to a decision to leave Congo in the middle of the night. Furaha, Roger and two orphan toddlers ran 3 kilometers, or just short of 2 miles, to the Ugandan border.

They settled at a refugee camp run by the United Nations. Upon arrival, they were given housing, food ration cards and a plot of land on which to grow food.

As time passes we get used to life here. We will understand more soon, and we will adjust slowly.

Over the next 13 years at the camps, Furaha gave birth to four children, and adopted three others. They were told they could apply for asylum in America; they went through constant interviews with officials about why they left and why they needed to come to the U.S.

Finally, after almost a decade of vetting, they were granted asylum in America.

A village of volunteers

In 2017, Sharon Fine, a sixth-grade teacher from Bethesda, Md., was upset about President Trump’s travel ban. She said her synagogue Beth El shared that sentiment. Fine explains, “No Jew has to look very far in their history to find a refugee.”

The synagogue, with Fine at the helm, decided to put in an application to sponsor a refugee family with a local resettlement agency Lutheran Social Services. As part of their application, they partnered with neighboring congregations — Bethesda United Methodist Church and St. Mark Presbyterian — to raise funds for the incoming refugees.

Before Furaha, Roger and their seven children arrived in the U.S., Fine had a crew of over a hundred volunteers on different subcommittees. They worked behind the scenes finding housing, transportation, food and clothing for the family. Their end goal to have the family be self-sufficient after a year, by helping them learn English and finding them jobs.

With the help of the employment subcommittee, Roger found a job working as a bouncer for a nightclub. He says it has been going well. He also has applications in for jobs at two grocery stores in the area.

For the family, learning English is key. In the daytime, Roger attends classes while Furaha sits with a home tutor who comes by while she takes care of the younger kids.

“I am learning slowly; the studies are helping me little by little,” she said.

Like many of his siblings, Fikiri, 16, received no education at the refugee camps in Uganda. He says that education is important to him and that he has made some friends at his new school. They practice English with one another during lunch.

“As time passes, we get used to life here. We will understand more soon, and we will adjust slowly,” said Fikiri.

Adjusting to holidays in the U.S.

In the living room, the family and guests assemble a plastic Christmas tree. Cecil and Roger’s family is Christian, and they celebrated Christmas in Africa. But, Roger says, the holiday is a bigger deal in the U.S.

“For us, Christmas is just another day in the year,” he said. “Even for us on Christmas, we have food together, we drink a soda, we sit together in our houses with our children, and we say, ‘Thank you, Jesus.’ Here it is different. The houses are decorated, everything has been changed for the holiday.”

Roger watches the tree-decorating chaos thoughtfully from a distance. He just can’t wrap his head around the idea of assembling a large plastic tree inside his home.

But the kids are loving it.

After the excitement of the holidays has passed, the volunteers will continue helping the family. They’ve committed to assist them for a full year. But Sharon Fine says she plans to stick around longer.

“They are my family now,” she says. “So I hope, I feel actually, that they’ll always be a part of a big part of my life.”

Fine’s family visits Furaha, Roger and the kids weekly. Her teenage kids play with the younger kids and teach them English. Mike Fine, Sharon’s husband, is always on call to handle any issues they might have.

“They are people with very big hearts who live with a lot of love,” says Roger. “They took us in, and it is good now to be with family.”

But for many other families seeking refuge in the U.S., a situation like Furaha and Roger’s remains a distant hope.

While the U.S. leads the world in the number of asylum applications, the total admitted to the U.S. has declined since President Trump took office. According to the State Department, in fiscal year 2018, the U.S admitted 31,225 fewer refugees than in the previous fiscal year.

NPR’s Peter Breslow and Ted Mebane edited and engineered the audio version of this story.